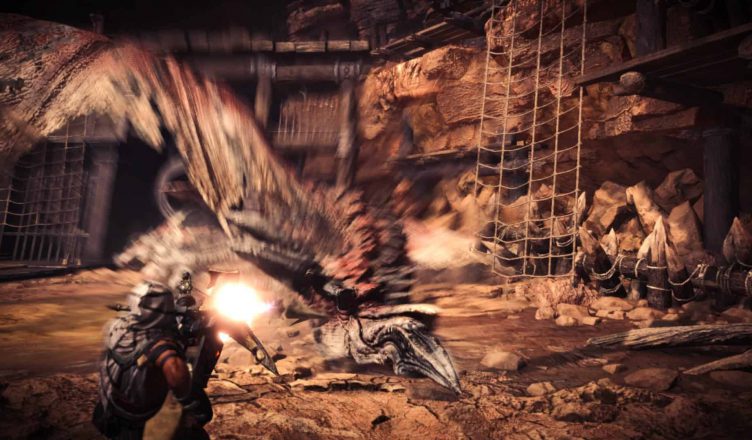 This guide was written and draft up during my playthrough on PlayStation 4 version of Monster Hunter World. The control scheme was explained using PS4 buttons and layout. Please replace that with the control scheme on your platform of choice.

So I returned to Monster Hunter World after a long break, and check out what I am going to do next. This time I want to change the pace a little bit, covering these two babies in the next two posts MHW Heavy Bowgun and Light Bowgun – which I haven’t dared to pick up since playing Monster Hunter World.

Like mentioned, shooting and aiming has never been easier in Monster Hunter series. With World, the control scheme of Heavy Bowgun (or any other ranged weapon) is similar to what you may see in Shooting genres. In which,

is to fire. You can also shoot directly without these buttons, but this will help bring up the classic crosshair and also a good indication of the distance that the hunter can deal the most damages (More below)

No fancy dashing – not when you are carrying around that gigantic gun. This is your main dodging moves for the next Diablos Charge

Another melee attack for the Ranged Weapon. Of course you are not using this to fight the that Deviljo, but it will help when you want to cause some damage on the terrain.

You dont have magic bullet, so this is your main tool to reload. Holding

will result in hunter reload all ammo in sequence – this can be used when you have some room to breath.

While Bow uses coating system to implement the effect of each shot. Heavy Bowgun, on the other hand, utilize ammo types. The number of options here is certainly higher than coating, and most of them were divided into two types – Raw Damage and Elemental Effect.

Spread Ammo – Turn your Heavy Bowgun to a shotgun

Finally, you will also gain access to Recover/Demon and Armor ammo types, this, in turn, give you the ability to buff your teammates  with a shot to their face!

The Bowgun family in Monster Hunter World also come up with the ability to modify the components and give it’s some more customizations in term of builds.

This is performed under Black Smith’s customization menu. The mods are divided into the following types:

Don’t underestimate the modifications! See how I blocked that Dive Bomb with two shield mods!

If this is the first time you use Heavy Bowgun, these two will surely cause some head scratching.

Simply put, for Deviation, indicating the moving of the crosshair when firing. With Deviation mod of Heavy Bowgun, you can reduce this swaying while firing.

Recoil, on the other hand, is another term for the knockback whenever you fire a big shot (imagine firing a rocket compared to a pistol).

With that out of the way, choosing between Deviation or Recoil mod for MHW Heavy Bowgun is definitely depend on your choice of ammo types.

If you are frequently using the beefy stuff like Sticky Bomb, or Pierce Ammo, then go for Recoils mods, this will help reducing the knockback for these heavy ammo types.

When it come to firing at a faster rate and want to improve the accuracy, then Deviation mods are definitely the option.

With that in mind, Heavy Bowgun Mods is a great addition to the already powerful weapon, but it does take some time to decide which is the best options for your current play styles. The good thing is it does not cost anything to change your mods.

We knew Bow has a new ability “Dragon Piercer” What about the Heavy Bowgun? In Monster Hunter World, Heavy Bowgun got not one, but two powerful new abilities.

Han, Bring out the Gatling Guns.

Yes, that’s what we got when you load this to the Heavy Bowgun. This will turn your current HBG into a carry-Gatling-gun. While each shot contains average damage, the rapid nature of this will surely cause that Monsters some serious bullet holes!

Introducing in Monster Hunter World, this ability of Heavy Bowgun allow players to become the sniper. At first shot, this will result in a straight shot go straight through the monster just like piercing shot. After a brief second, the shot will detonate, dealing damage to the target.

The best way to master MHW Heavy Bowgun is to know which ammo types are used at the right time.

If you are going in as a team, mostly you will have the time to reload and get yourself a reasonable distance to shoot to your heart content. With that advantages, your focus should be dish out the most damage to the monsters, this can be achieved by those Cluster Bomb, Sticky Bomb & Wyvern Snipe + Wyvern Heart.

With some Heavy Bowgun that support elemental ammo types, you can also be sneaking some Sleep Ammo or Paralysis, give your teammates some time to plant those Mega Barrel Bombs.

That does not mean the solo player is not suitable for MHW Heavy Bowgun. The catch is (again) you just need to prioritize which ammo to use first, and maximize the damage output in the most convenient ways.

With MHW Heavy Bowgun (and other Monster Hunter Ranged Weapons) most of the time your job is to aim & shoot. There are not much of a “combo” here, but rather on how you setting up yourself (and the poor monster)

While there are many ammo types to choose from. The general approach is to unload the highest damage shots when there is an opening,

You can also combine these two playstyles together to increase the effectiveness of it.

We already knew that Heavy Bowgun focus lies in raw damage and how to go through things in the most effective way. With that said, below Armor Skills is the most essential for Heavy Bowgun:

If you are already familiar with Bow, most of the armor skills needed for MHW Heavy Bowgun is covered there.

But if you are switching from a melee weapon, let’s take a look at what makes up an effective Heavy Bowgun builds.

It’s is mostly self-explainable when combining the above skills with the ammo types of Heavy Bowgun.

If you are just trying out the Heavy Bowgun and testing the water, I suggest picking up the Artillery, Spread Shot & Special Ammo Boosts firstly to get used to the control while still dealing decent damage.

As you may already guess. This build is focusing on the special ammo type “Wyvernsnipe” As this is capable of dealing huge damage to the monster. While it does take some time to get used to this type of gameplay, it is very rewarding once you mastered it, and soon you will unleash the advancement of warfare on that poor Nergigante.

You will need to know the process from disabling the monster (Paralyze, Sleep or Knockout…) to position yourself in a proper position.

If you already playing Bow or follow my last post on the Bow  Keep that Drachen set!

For Head Armor, I go with Dragonking Eyepatch Alpha –  a safe choice when it’s come to High-Rank armor, this provides you with one level 3 slot which can give you some more customization. Luckily, with Tenderizer Jewel 2 I can also maximize the Weakness Exploit armor skill. This give me the below:

For the Waist, Nergigante Coil Beta is picked for the “safety” reason. This gives you two levels of Attack Boosts and completes the sweet level 4 ATK Boosts.

Finally, the chest I picked is Kaiser Mail Beta (Crafting from Teostra Materials) This quickly gives you the maximum of Special Ammo Boost – a must-have skill for any Bowgun.

For the build focusing on the Wyvernsnipe ability, your first priority will definitely bring up a Heavy Bowgun that has this ability.

The weapon I personally used is Magda Gemitus II. Let’s take a look why this is picked.

Right of the bat, this carries pretty impressive damage (just after the Diablos Tree) Coming up with 315 in ATK.

Finally, the icing on the cake is the ability to load Paralysis and Sleep ammo – Which is definitely the best thing you want to stack up damage in a short burst.

The main reason Magda Gemitus II was picked is the universal of this Heavy Bowgun, you can unleash hell with those Sticky Ammo Level 3 and Cluster Bomb (both level 2 & level 3) and able to double damage (put the monster to sleep) and using Wyvern Ammo to finish the job.

As you will use Sticky Ammo a lot, this should be your first skill to get after you picked up the Zora Heavy Bowgun.

While the above is my build for the playthrough with MHW Heavy Bowgun. You can easily swap out the armor skills for other builds as well. To wrap the builds suggestion, below are the current meta builds that are universally agree and tested by several speed runners.

In the same vein of the Light Bowgun, MHW Heavy Bowgun benefit greatly from the Xeno’jiiva Gamma armor set. As both Heavy Bowgun and Light Bowgun specialties are in the ammo, maximize the ammo count is one of the best perk for an agressive play style

Being a Gamma Set, the Xeno’jiiva can also be upgraded and give our gunner the highest defense possible. As you only need three pieces of Xeno’jiiva Gamma to get the most out of it, the remaining armor will depend entirely on your playstyle.

The Heavy Bowgun certainly don’t have the luxury of the Rapid Fire ability of Light Bowgun. It is natural to opt for a more power focus ammo type. Spread shot is one of the most common builds for the Heavy Bowgun. 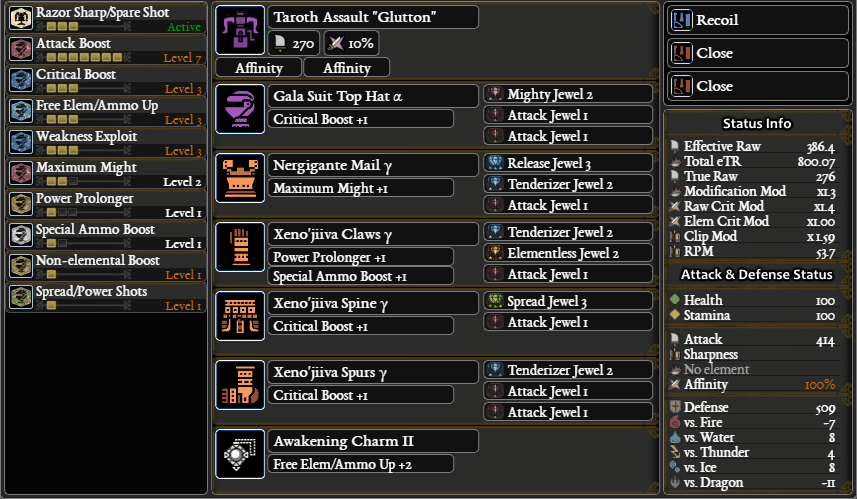 Love to see that shot goes all the way through the monster? Here you go! 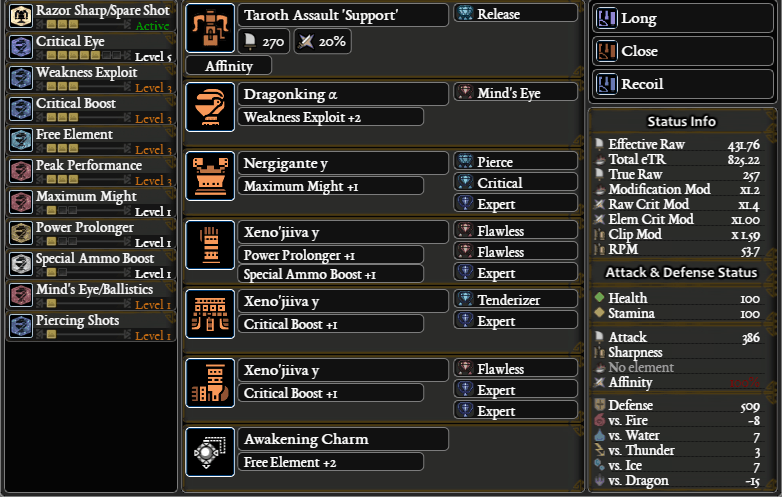 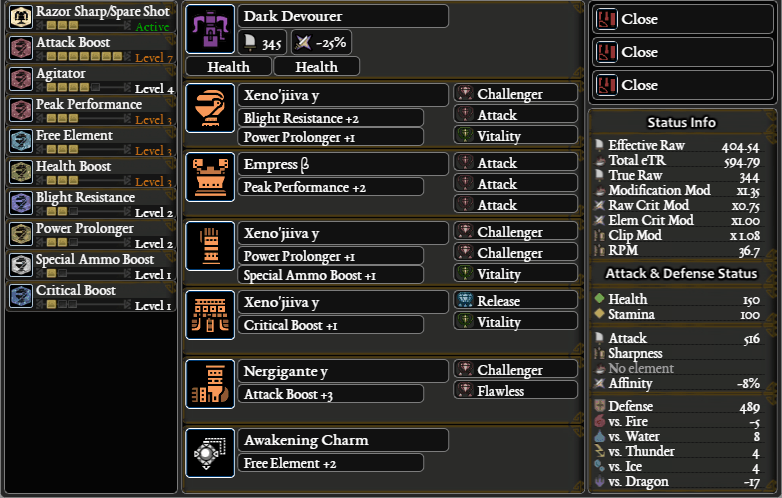 MHW Heavy Bowgun is re-introduced with many improvements. Starting from the control mechanism to the powerful special ammo types.

It definitely does not carry the speed and strong versatility as the Bow, MHW Heavy Bowgun can be considered as the Great Sword of the Ranged family tree. In the right hand and a good-enough-build, this cannon can unleash the most powerful firepower to those monsters. Have you decided to pick the Heavy Bowgun for your next switch?