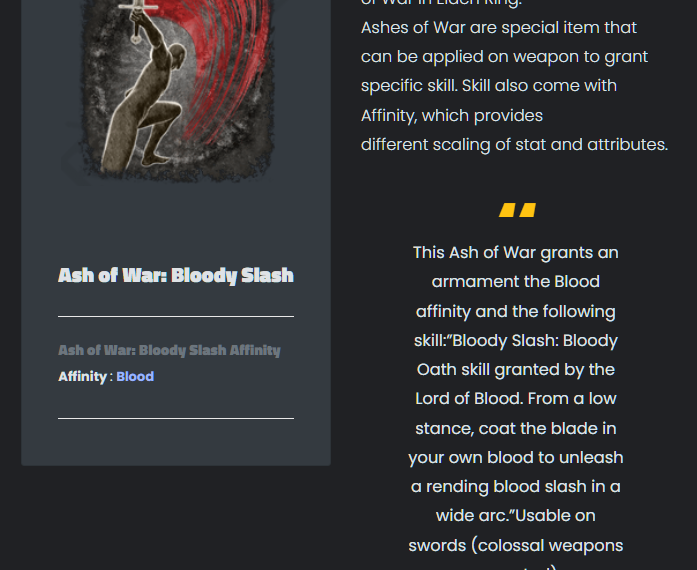 Why Bleed Build in Elden Ring is so popular?

Bleed Build has been one of the most common build in Souls series. One of the reason is dealing just raw damage is never fun.

Aside from all the fancy Ice, Fire & Poison build-up, Blood loss has long been one of the most effective builds in any Souls game. In Elden Ring, this remains the same.

This is the Ultimate Guide for Bleed Build in Elden Ring.

Below are a list of weapons you can used for this build. If you prefer using the classic katanas Bleed build, then Rivers of Blood or Nagakiba will be a solid choice. If you prefer a more modern approach, make sure to check out Eleonara’s Poleblade or Godskin Peeler

What about a new game weapon? We got you cover, if you are just starting out in Elden Ring, then Scimitar with the Warrior class is one of the best early build in Elden Ring as well.

If you just starting out with Bleed Build, then Scimitar is the best option. Wearing two Scimitars at the same time will also let you use the Jumping attack with L1 (4 hits) This will help with the build-up of the Blood loss status and also let you practice triggering the Blood-loss more often.

Please make sure to equip Bloody Slash with all both Scimitars before running out!

The best class to start out with this build is also Warrior – which has two Scimitar right of the bat.

In Elden Ring, you can respec your character using Larval Tear. As you progress through the game, the stat distribution will need to be change. For Elden Ring Bleed build, the beginning does not require a lot of stat, but after level 80, you will need to put some point to Arcane to have a more powerful end game build.

In the beginning, you will need to get used to the aggressive playstyle of Bleed Build, so you will spam your attacks a lot to proc the Blood Loss effect. Endurance will help with the Stamina increase, as well as all those fancy jumping attacks.

At this stage, you will have access to some talismans, making the build less dependable on stats. You can now try min maxing your stat to have optimal damage, most weapons in Bleed Builds will scale with Dex (If you prefer Katanas)

You will now have more stat to spend, so Arcane can be one of the stat you can focus on. This stat also help you equip powerful Dragon Spells (From the Dragon Church) giving you more tool to deal substantial damage.

For Elden Ring Bleed build, Bloody Slash is also the corner stone skill for all weapons.

Why do I need a spell for a melee build? In Elden Ring late game, you will have more stats to use, making combine build with certain stat like Arcane or Faith easier. These stats also comes with some very powerful skills, so itcan boosts

All these Incantations weakness are the same – they are super slow to cast!

If you are just starting out with Elden Ring, then this should be the build for you. At the beginning, this build will only focus on dealing damage through normal attacks. This will help trigger Blood-loss status, making boss fights a lot easier

Later on, when you grant more levels and can upgrade more stats, this build can scale with Arcane or Faith, unlocking more powerful spells in the end game.