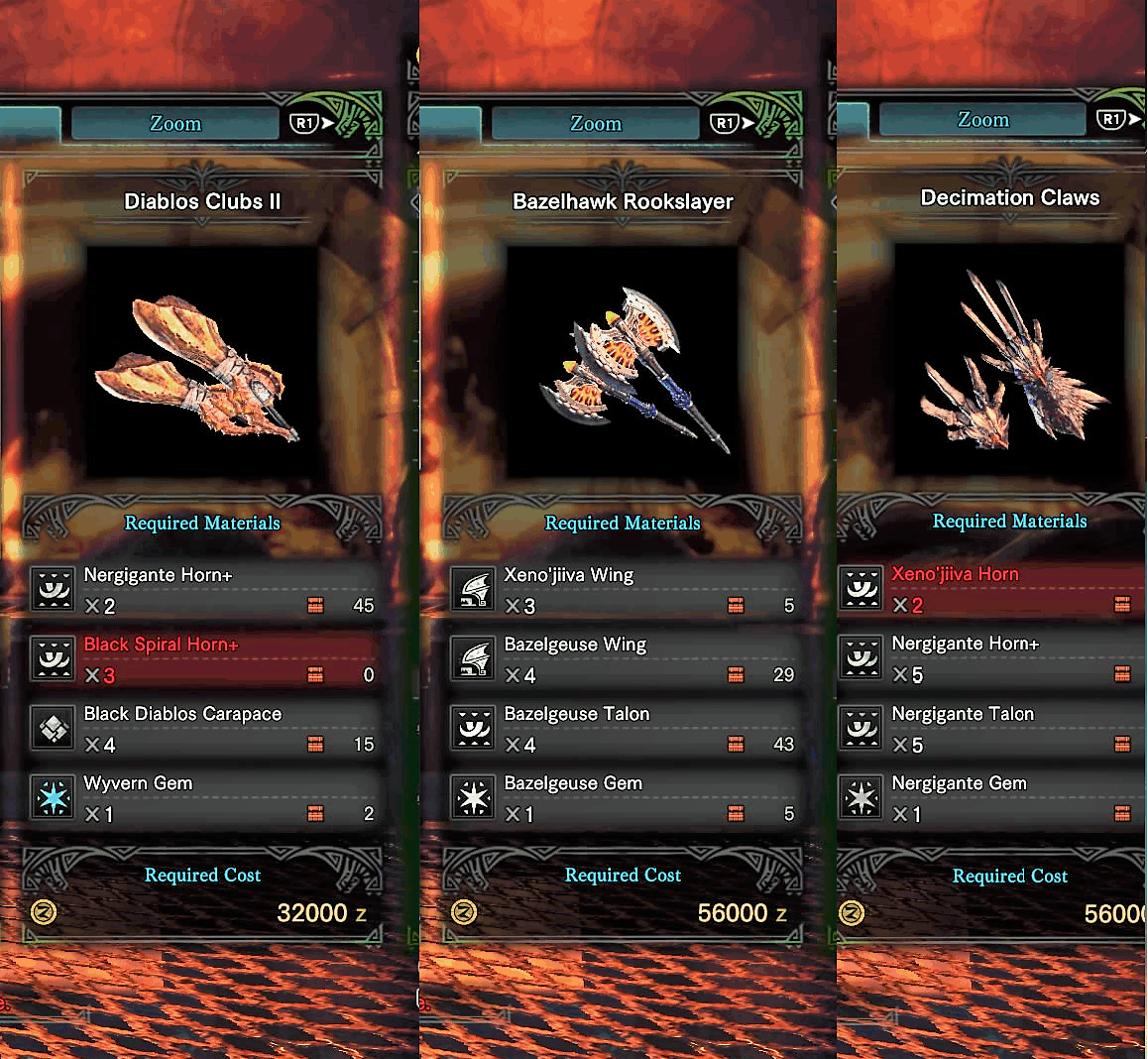 Looking for the best Dual Blades for MHW Iceborne? This is a quick compilation for the current Best Dual Blades in Monster Hunter: World Meta (Pre-Iceborne)

For MHW Dual Blades, as you will spend a lot of time spamming the Demon Dance, you will eat away that Sharpness bar in a matter of second. A good Dual Blades build will need to take this into factor. This makes skill like Master Touch and Sharpness boost sync well with Dual Blade gameplay.

For armor set, you will never go wrong with the full Drachen set. This set bonus includes Master Touch and Elemental Airborne. This also come with five points in Critical Eye, add in Weakness Exploit, and you basically have the infinite Sharpness weapon.

This is the latest Dual Blades for the current meta. Getting the inspiration from the Witcher series, you will get a small sword and a long one when using this Dual Blades. The animation of dashing will changed to the movement of the “Lady of space and time”

I could watch this all day!

For how to get this Dual Blades, check out my guide on the Ancient Leshen below

This is essentially not a “Raw” Damage weapon as it comes with 180 Dragon element. However, with 308 Attack Damage, you can basically use it on almost anything.

Similar to Nergigante weapon tree, the Deviljho weapon tree is capable of giving the highest damage weapon with Dragon Element. This may due to the nature of both monsters being the eater of all other species.

Wrathful Predation has the standard damage of 308 (Highest in Dual Blades Weapon Tree) and of course, this is countered quickly by the minus Affinity (30%) You can still build a decent element build-out of this.

If you are new to Monster Hunter, it is easy to mistake Blast as an elemental effect, but well it is certainly not. Blast element is similar to Sleep or Paralysis and will require build-up time before the “proc” This alone makes the fast-hitting weapon a natural choice for a good blast build.

And who can give you the best Blast Weapon than the flying-bomb-dropping-plane?

Dealing with this guy to get a blast weapon!

The Bazelguese fight is your first introduction to High Rank, but over time, it will be a trivial fight (I still got carted time to time by his bombs though!)

Being one of the fastest weapons in Monster Hunter series, time and time again Dual Blades has been the first choice for the hunter who prefers to utilize the elemental aspect of the weapon.

Before we start, here is a quick note on the elemental meta of the current MHW (6.6)

To have a good Elemental Build, you will need the Critical Element. If you don’t have Kjarr Weapon, you will then need the Critical Element by wearing two pieces of Rathalos family armor (This including Azure Starlord, Rathalos, Rath soul and Rathian armor) Due to the armor skills, the Azure Starlord Waist (Beta) and Rathalos Chest (Beta) is often considered as the best option.

For Taroth Dagger, after getting Critical Element from two Rathalos pieces, you are now cannot get Master Touch bonus from Drachen. This leads us to Kaiser Gamma set (Teostra) which gives Master Touch as a bonus for three pieces.

Introduced as a 16 hunter siege. This mission main objective is to break the horn of the gold-plating Kulve Taroth. Upon completing the quest, according to reward level, and at the end of the run, you will then obtain a random weapon from the pool.

Looking for the best Dual Blades build for MHW Iceborne? Here you go.

This Kulve Taroth weapon not only has high Fire Damage, it also gives you 294 Base Attack damage. When you need more fire, simply add in Fire Jewels, other time, you ca

If you manage to get your hand on Kjarr Dagger, you can safely ditch the Kaiser Gamma and return to the Behemeta again.

The elemental builds for Dual Blades is essentially the same for element sent. Each weapon can be powered up with the elemental jewel, You can swap out the jewels that suitable for the current monster. Below is a combination for each monster

This is basically the main set for a Dual Blade builds.

MHW Iceborne is released on September 6th. The latest developer diary update from Capcom has been dropped with several changes to weapon behavior. For Dual Blades, the most visible damage is the modification on the

If you are already a Dual Blades hunter and is eager to test your new weapon in the upcoming Iceborne expansion (September 6th) Then make sure you have a good ice resistance armor set and a Fire Base weapon! This makes Taroth/ Kjárr Dagger “Rage”  is definitely an option for battling Velkhana.

Need some proof? Check out this awesome video from CantaPerMe