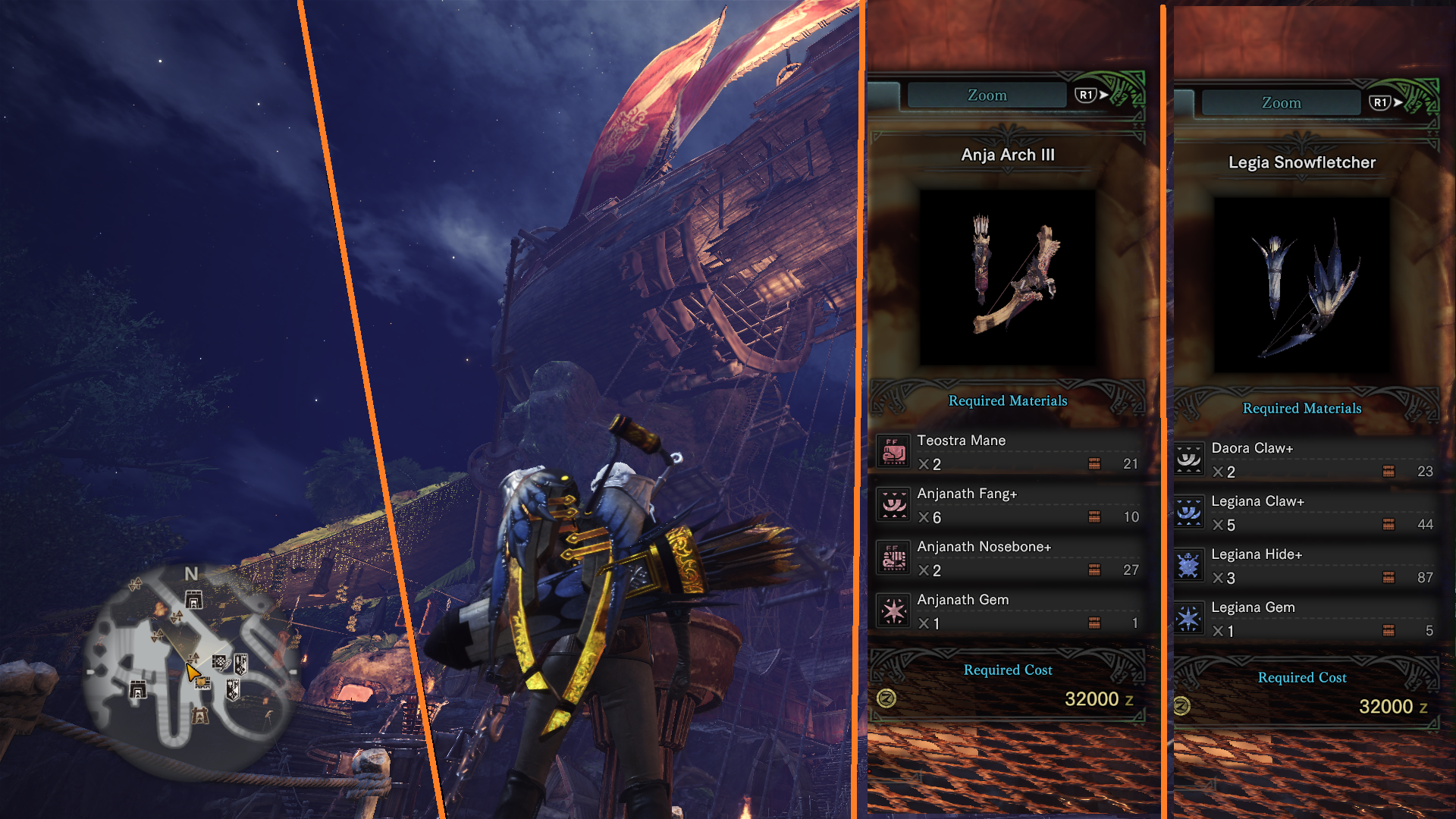 Looking for the best bow in MHW? Below is a quick list of the current best bow:

In my last guide for MHW Bow, I covered the basic movement and combo for the Bow, one of the most over-powered weapons in MHW meta. This will be changed right after the release of Iceborne… More below

Back when I published my Bow Guide and Build, I try to test around with a Raw Damage build, but over time, it actually got me nowhere 🙂 The reason? The number of hits from the bow is ridiculously high. in the right hand, bow can quickly shoot out a volley of arrows in a matter of second.

This makes the elemental bow become the natural choice for good Bow builds.

Surprisingly, This bow that you happen to get pretty early on is one of the best bows in the current MHW meta. With 390 Fire Damage, the Anja Arch III can be your single bow for dealing with monsters like Kirin or Vaal Hazak.

Weakness Exploit is added via jewels and Rathalos Beta. Finally, you still have one level 3 jewel from Rathalos Waist Beta for a coating of choice (Coating jewel like Blast are alway level 3)

Follow the same vein of all MHW Bow Builds, you will need Spread(for Spread shot) Forceshot (for Normal Shot) and finally the Mighty Bow jewel to increase Bow Charge level. As you will dashing around most of the time, Constitution,

Yes, the annoying howling wyvern that give you the luck armor.

Similar to the Anja Arch III, this Legiana bow is on the other end of the pole. If you are going to fight Behemoth or the annoying Lunastra, bringing this elegant bow with you and you are good to go. If you want to switch up a little, this also comes with Poison and Sleep Coating.

Just check out this awesome hunter give the Lunastra a cold bath!

Love Piercing Dragon? Did you know Bow will have another powerful skillshot in the upcoming Iceborne expansion?

After Fire, Ice and Thunder, Dragon element is one of the most universal weakness for monsters in Monster Hunter World. The Dragon Bow in this case become the best option when you need to deal with monster like Deviljho or Vaal Hazak.

When it comes to elemental bow, it will be missout if we do not go over the random drop from the shy Kulve Taroth. The 16 members siege mission is designed to provide the best elemental damage for all fourteen weapons in Monster Hunter: World

This is another Fire Bow, mostly used when you want to change the scenery a little bit. This is slightly weaker than the Anja Arch III.

But you are compensated by the fact that Critical Element come with the weapon itself. This give you more customization for the armor part.

In the below build, Gala Alpha helm was used to get 1 point Critical Boosts along with three  one slot.

If you prefer the Legiana Bow with some gold plating, Kulve Taroth can help you.  Just as other Kjarr Arrow (Bow) You will get Critical Element right in your weapon.

This leaves you some room with Armors customization.

Your weapon for the Arch Tempered Nergigante hunt, there are not much of a difference compared to other Kjarr Bow. If you are still wonder about the power of elemental bow, just check out below video…

Below is an example for a Taroth Bow build

This bow requires Kulve Taroth Beta and Awakening Charm to get the Thunder element out of the Taroth bow. This is another downside of the Taroth Arrow weapon type. Although the Lighting element of this bow is pretty high (360) Some may get turned off with Free Element.

This is still a strong candidate for your next fight with Arch Tempered Nergigante or Kushala Daora.

For a recap on what make a good bow builds, Check out my last post for Bow!

If you are already a main bow player, then you probably catch the news that Bow got a huge “balance” issue in the upcoming MHW Iceborne Expansion (Release on September 9th) If not check out my post below

The TL;DR version for MHW Bow changes in Iceborne is that all of the elemental damage has been nerfed. This is to make sure all weapons got the spotlight in the upcoming meta of MHW Iceborne. However, this change did cause some outrage in the MHW community.

With that said, in Iceborne Expansion, you will still be safe with a Fire Bow such as Anja Arch III or Kjárr Bow ‘King’ . We actually not 100% sure that this change will affect bow dramatically, but expect the power to be reduced to some extents.

Even with the upcoming Iceborne Changes, Bow is still a great weapon to use and it still can be great in the hand of the right hunter! What is your current builds for MHW Bow? Let us know below!

Love Ranged weapon? Make sure to check my guide for Light Bowgun and Heavy Bowgun!