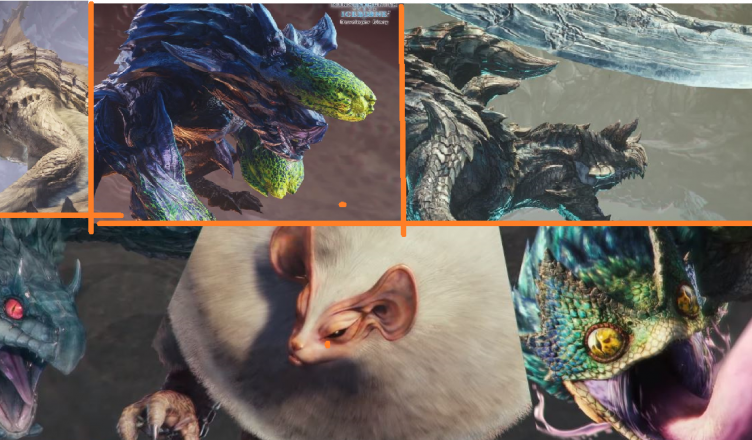 On 20 August Capcom just dropped a big update with the Developer Diary #2. This is when they updated the current progress of MHW Iceborne and highlight the changes they implemented to the new expansion of Monster Hunter: World. This is by far the biggest updates for MHW Iceborne, and probably mark the end of the updates, as we almost got all information on the new expansion for Monster Hunter World.

And with ~1 hour of content, we can self-assured that we will receive another amazing content for September! Below highlight the changes in the video and some additional information on MHW Iceborne updates.

I covered briefly on the new monster subspecies back in the trailer for Ebony Odogaron and Fulgur Anjanath. In this developer diary, we also see new details for two monsters 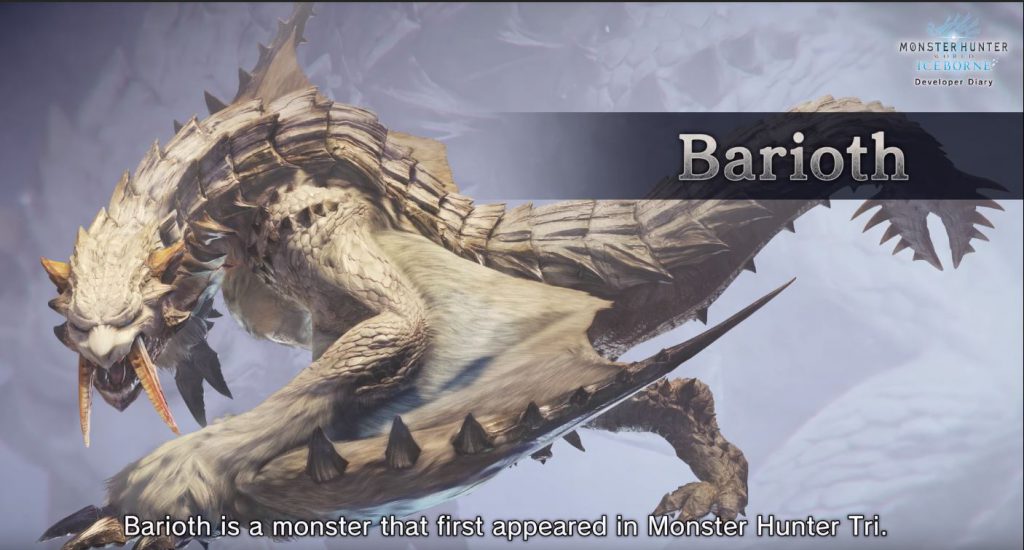 The Barioth now can fly to the ice wall and use it to shoot out ice shard at you. Talking about the possibilities.

They surprise the fan with a new Elder Dragon! Namielle is an elder dragon with Water elements. We don’t have much detail at this moment aside from a brief teaser at the end of the developer diary for this monster. 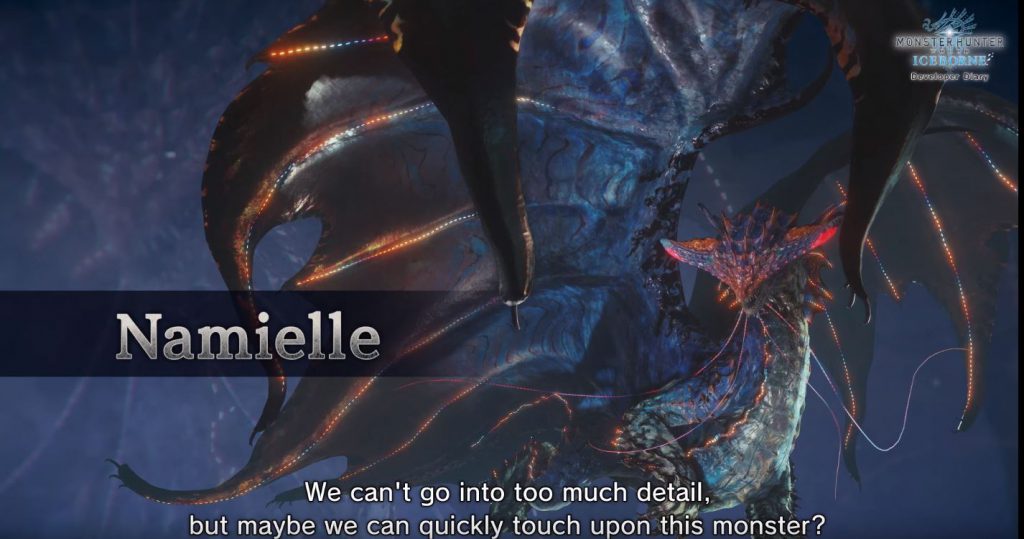 And of course, the cover art Elder Dragon Velkhana is in the spotlight again.

Prior to the release of Monster Hunter: World Iceborne, an update will be delivered (Available to download on September 5th) for console player. This is marked as 10.10.0 update, which will include all the changes in the meta. This alone takes up 35 GB for consoles (not including Iceborne content)

With Iceborne content delivered (55 GB) You are now having over 100 GB (counting future updates) to add for the new journey to the iceborne world! You can check out all the weapon changes of MHW Iceborne in the official Capcom website for ice borne here.

As Capcom already did a great job of capturing all the changes in details, I will not rephrase everything but will focus on the biggest changes of the weapons.

The biggest nerf to this day has come to the poor Bow. Need evidence? Just check this out 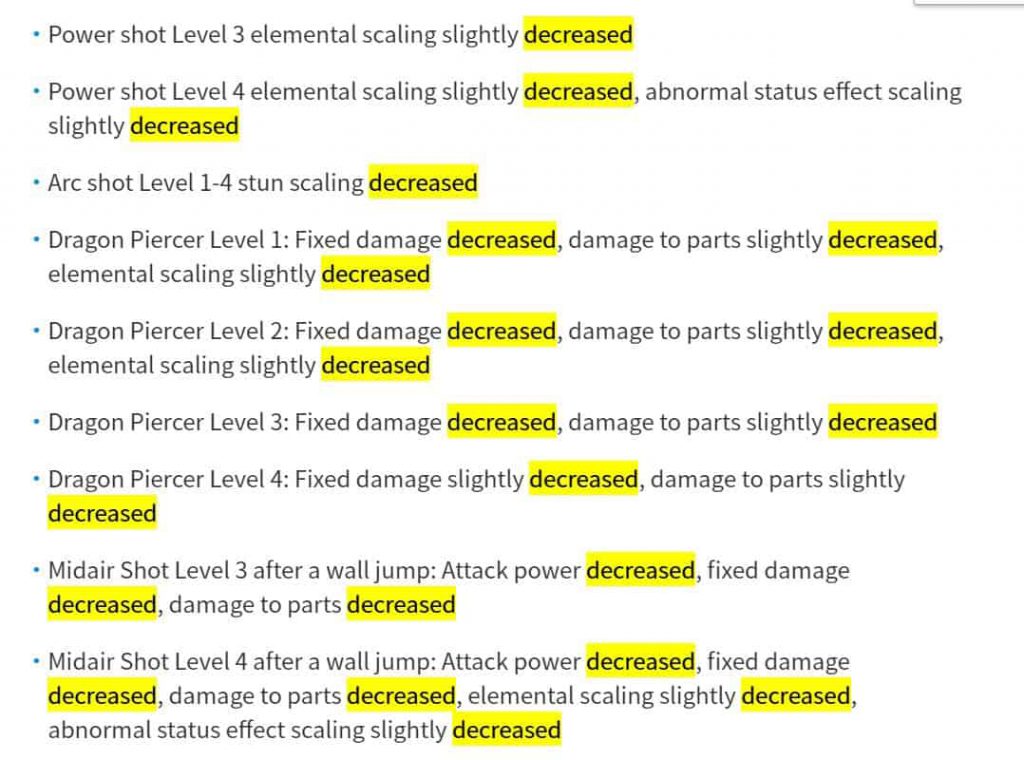 This is the culprit for all the debate over the last few days. Mentioned very early in the video, there will be a strong focus to elemental weapon compare to the base game in MHW Iceborne. The reason is (You probably know it already) Raw damage builds have dominated the meta of Monster Hunter world for a while now. While all the detail are covered in the Capcom notes, let just focus on the “nerf” in this section.

But why Bow got this? Because Elemental Bow has been dominating the meta for quite a while now.

Did you know? The Fire-breathing-dinosaur-of-the-first-map provides one the best elemental bow.

And Another one for Arch-Tempered Nergigante Solo (Kjárr Bow Spark)

Another weapon that got many attentions is the Great Sword. This time, the flying Great Sword builds that used to give us all a susprise will take a hit

It’s all started with this video… 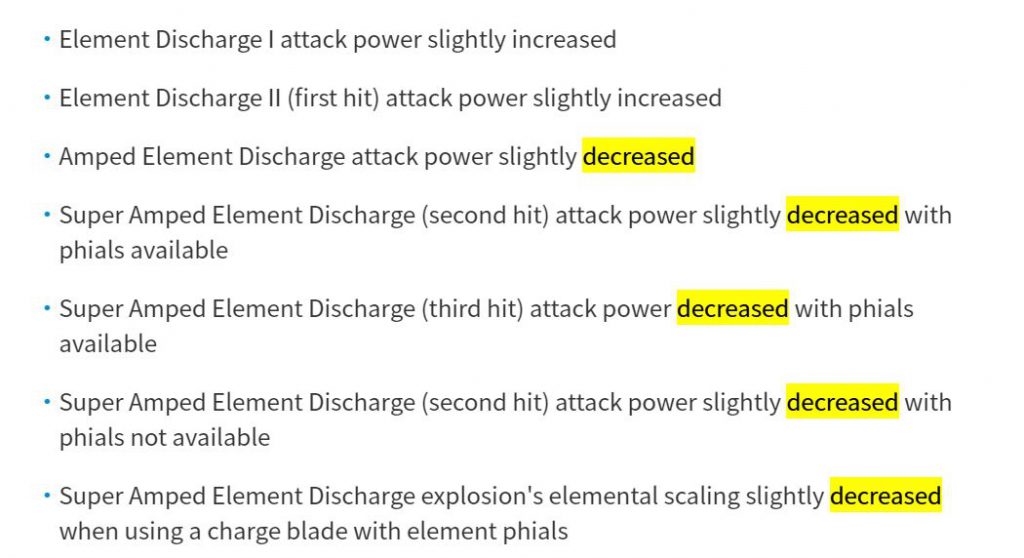 Another nerf with a strong focus on elemental boosts. The phial explosion on the Charge Blade Super Amped Element Discharge is always treated as non element, and it is the main damage source for any strong Charge Blade player, a descreased in these phials will surely force Charge Blade User to find out a new way to increase damage output. 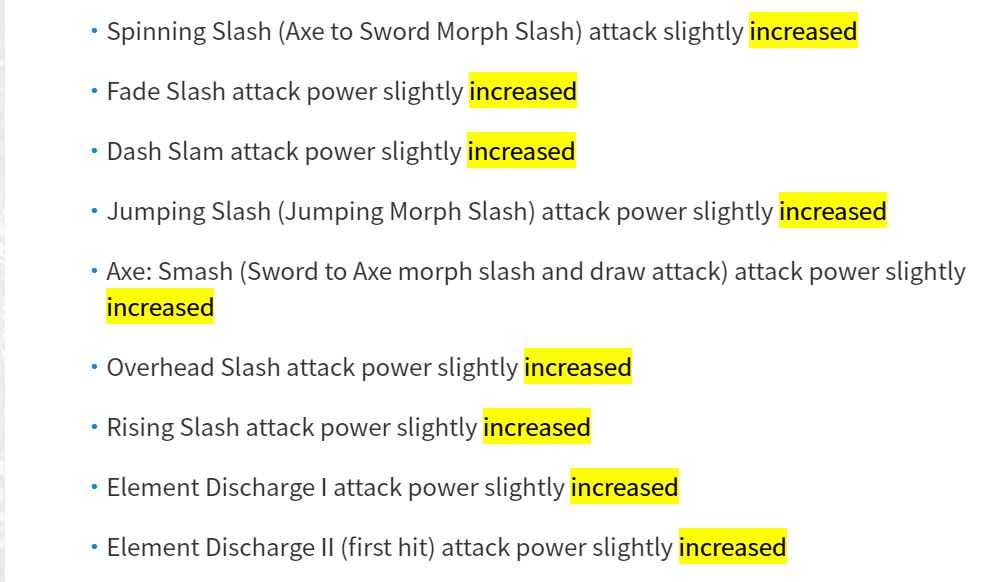 With the addition of the new Sheathing Stances, Long Sword infamous abiity Foresight Slash got a hit in Iceborne expansion. Previously, your main combo will always include a counter with Foresight Slash (To fill up Spirit Gauge level quickly) After that is unleashed the Spirit Combo.

The nerf includes a slight modification to the Affinity of the Foresight Slash, and a reduce in damage for Spirit Slash here and there. While it may sound awful, let’s not forget the new Sheathing Stance with Spirit Iai Slash will benefit from the Critical Sheath and Pubnishing Draw armor skills.

These new attacks will surely be used to further enhance the verstaility of the Long Sword.

Not much for Dual Blade when it come to the nerf part. This is because it is already a pretty balance weapon for elemental focus builds

But… but.. everything got nerf in MHW Iceborne?!

Well, it is easy to focus on the negative my friend, but let’s not forget the positive side. On the contrary, look like the Switch Axe finally got justice with this new update.

To me, the biggest change for Switch Axe is the evasion distance and the increase in damage for Axe mode. Previously, Switch Axe is a little hard to get into because of the lacking in the defensive mechanic, your only option was to dodge roll! But with this change, look like the damage got boosts, which mean you can now opt to be more aggressive and finish the monster before it finishes you. 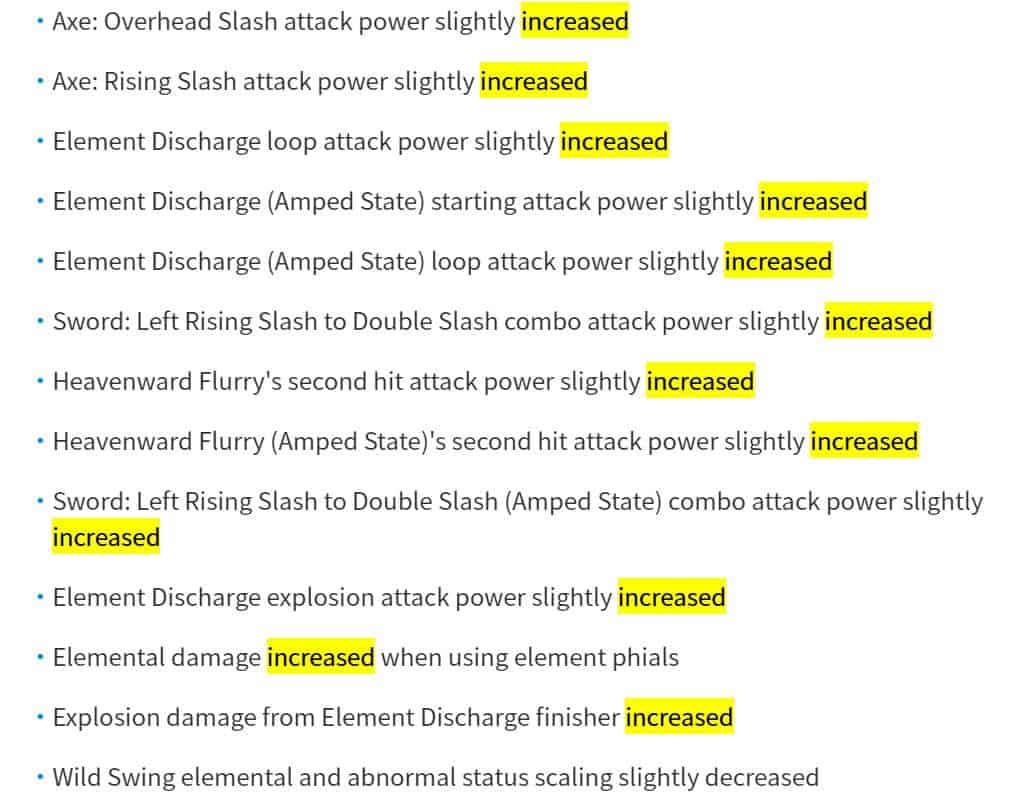 Another weapon that receive a quick boosts is the Insect Glaive. As you probably have guessed, the focus is on the Kinsect part of the Glaive. This is to encourage players to use this little bug more frequently I believe. 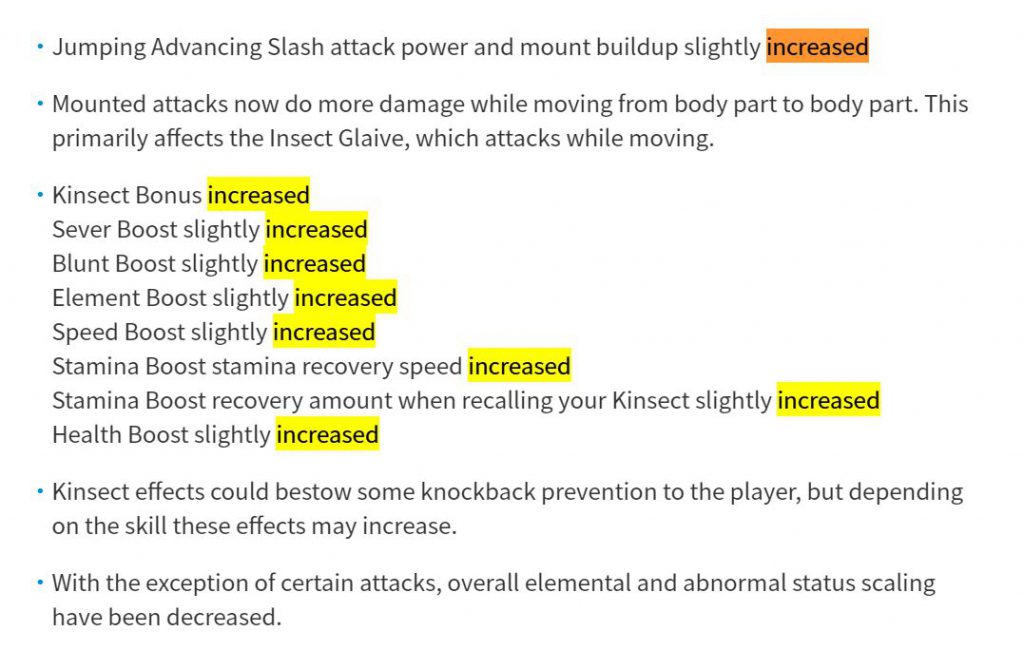 This is essentially on the top list of most requested feature for Monster Hunter: World. We asked, and they finally delivered! You can now having the option to craft the layered armor for all version of the armor in the game. This probably require some additional materials, but well, MHW Fashion Week, here I come!

Instead of jumping in SOS flare for fun, now you can earn an additional slot of reward when helping lower rank player. Only one reward though. 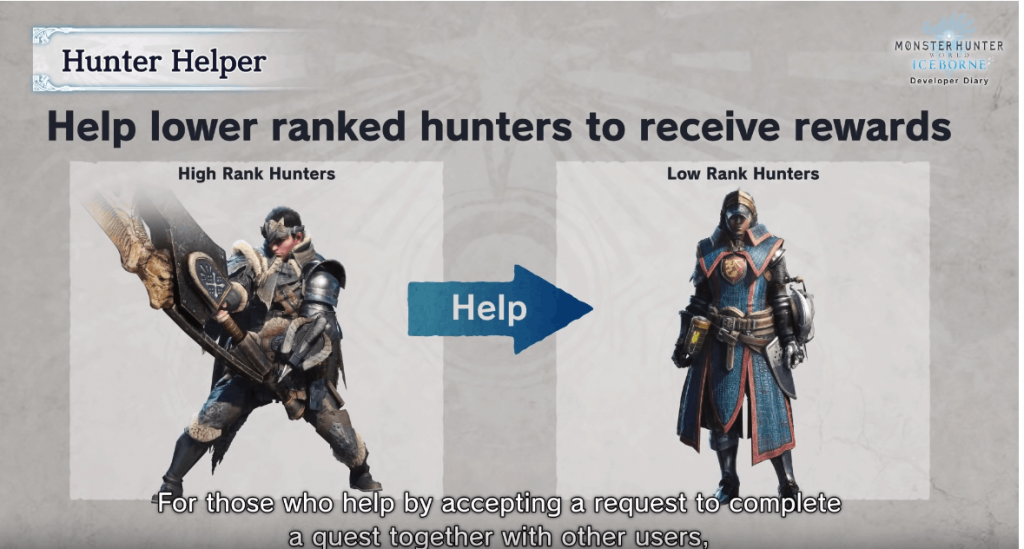 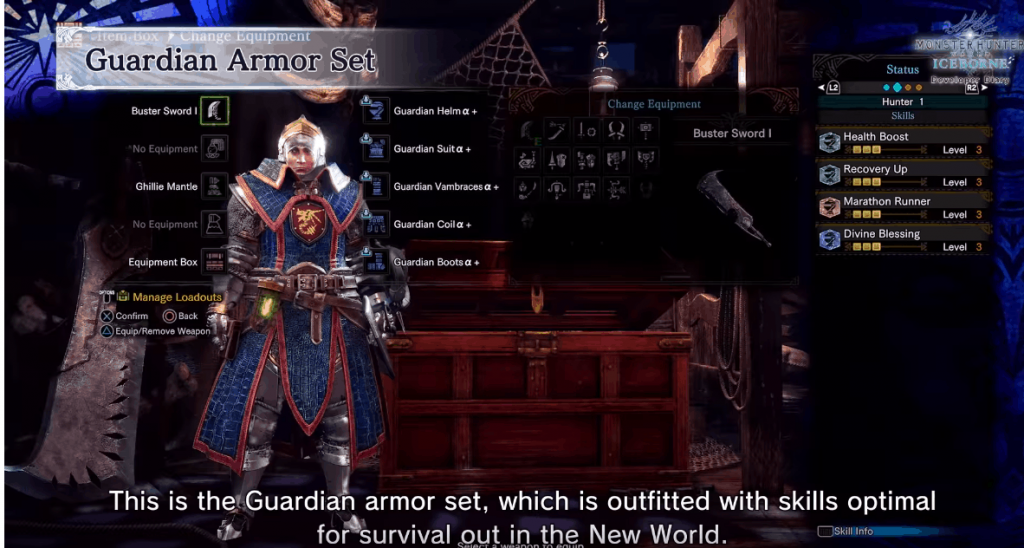 You will get a new set prior to Iceborne release as a free update. While the developers mentioned this is pretty powerful, look like they are just talking about the journey through High Rank 16 (Finishing the game) This provide a nice addition for new player, but not much for the one who are already on the Arch Tempered runs.

This definitely a set for survivability and is well versed with all fourteen weapons. We don’t see details on the slots yet, but this will surely powerup your journey toward the first encounter with Xeno’jiiva.

PlayStation 4 players will meet the huntress Alloy one more time with this event. The weapon that got the special treatment this time is the Light Bowgun.

Will they announce a collaboratino with a Sword and Shield featuring God of War?! Will they???

We are now in the position to think of what to do before this heavy update hit us (MHW 10.10 Update will be released on September 5th) And will change the current meta tremendously. The first thing comes to my mind is to relive the glory days of Bow Solo with some elemental builds 🙂 You can check out some of that here

If you want to switch to a weapon that got a head start in this release, I recommended the Switch Axe. Of course, I believe all the weapons are still fun to play with the new Clutch Claw, but well, some will surely be neglected for the upcoming fight in the snowy world of MHW Iceborne.