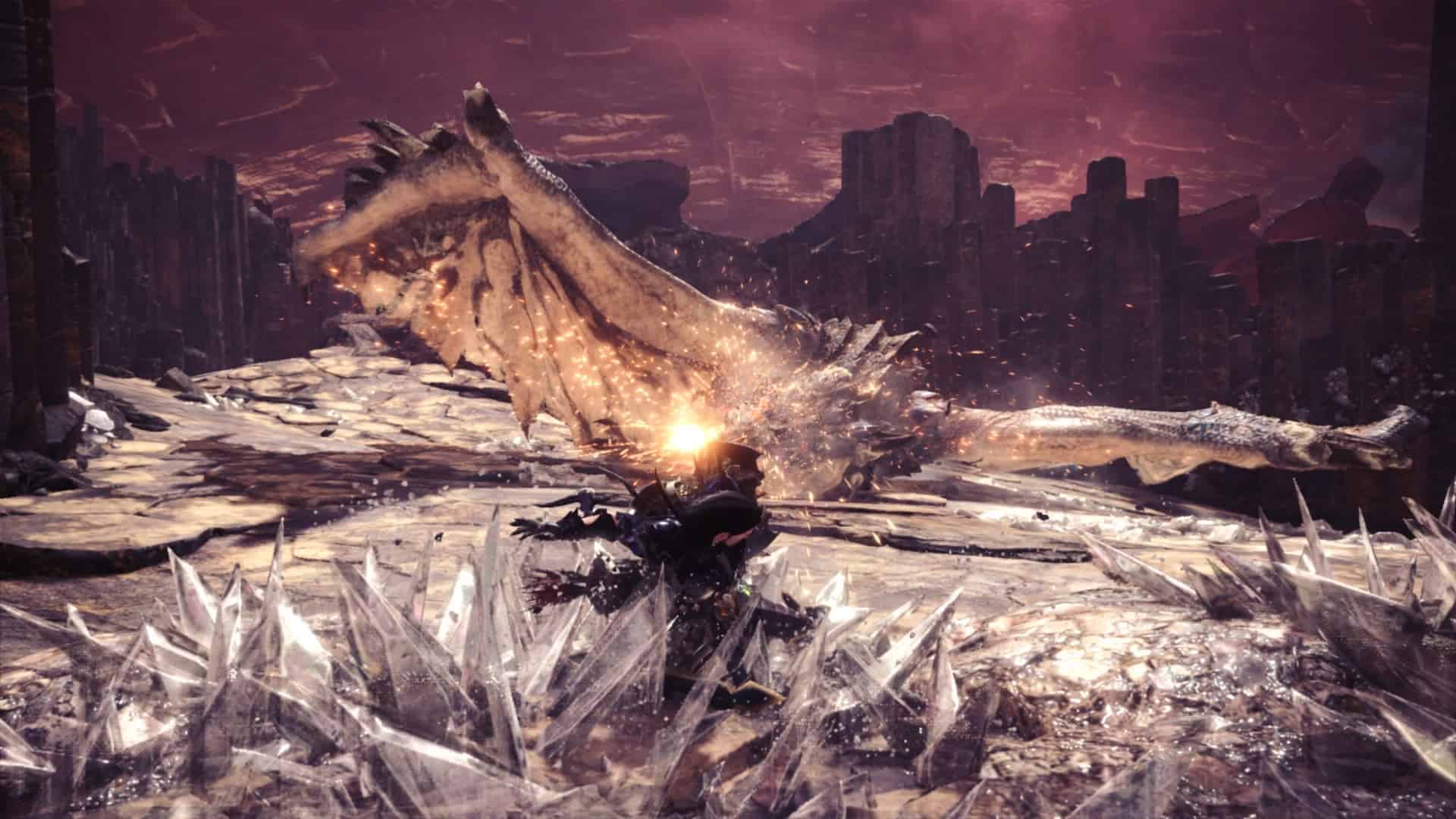 Hello again, continue off with my detailed guides streak. Today we will go through one of the beloved weapons of the series – The Bow! This also introducing two different builds for this weapon – The Azure Dragoon and Tyrant Archer. If you haven’t read my previous build for Insect Glaive, here is the link!

Why it’s pretty self-explainable for a hunter to use a bow. This weapon first appearance is in Monster Hunter 2. Since then, this weapon earns its place as one of the most popular weapons as well as a change of taste when melee weapon users want to change their play styles.

Like mentioned, shooting and aiming has never been easier in Monster Hunter series. With World, the control scheme of Bow (or any other range weapon) is similar to what you may see in Shooting genres. In which,

is to fire off that arrow.

You can also shoot directly without these buttons, but this will help bring up the classic crosshair and also a good indication of the distance that the hunter can deal the most damages (More below)

will simply shoot an arrow – this is your normal attack and has lowest damage. But hold this will result in a Charged shot.
This charge also has three levels. Your first shot is considered level 1 and the second and the third shot are the remaining level.

Notes: This charge shots cost stamina. If you run out of stamina during this, you will automatically release the shot.

Surprisingly, this is a new mechanic of Monster Hunter World. If you press

in quick succession, your next shot will automatically move up to one charge level. This result in a faster shooting rate and also deal more damage in the long run.

Notes: Hunters from the previous version of Monster Hunter will be more familiar with the normal shot above (which you need to charge up to level 3 to have the most damage) But the addition of Rapid Fire combo allow the hunter to quickly get the job done.

This combo has also been proved more efficient than the tradition when it comes to kill time.

This combination allow you to change your current coating. Pressing

again will apply the coating

This will result in a volley of arrow to a target location, dealing Impact Damage. While the damage is not that good, this shot is capable of stunning the monster when land on the head.

Notes:  Similar to other Impact attack. This shot does not apply any of your coating, meaning you cannot dealing statues of elemental damage with this shot.

The Arc Shot also under the effect of charging. If you charge to 2 level and follow with an Arc Shot, this shot will deal a little more damage and last longer

will result in a quick spread shot to the front.

This combo will go in this sequence Quick Shot > Power Shot > Arc Shot. The Arc Shot in this combo will be longer and has more damage thanks to the previous two shots – This allow the Arc Shot to benefit from the Level 2 Charge.

Tips: In below video, you can see that subsequent shot after the side step will land at the same location of the first shot (aiming) This is very helpful when you want to quickly fire multiple shots to the target location.

A flashy maneuver trigger when you perform dodge during shooting. The special ability of this is allowing the hunter to have a charge quickly as well.

A powerful melee attack (but rarely used) The hunter will lunge forward and use his gigantic arrow to … stab the monster. Pretty situational but it has some use.

New move of bow in Monster Hunter World. This powerful shot will release an arrow that go through and deal damage in a straight line. While it make the hunter stand still. This is the most powerful attack of bow.

Notes: This shot also benefit from charge level. Your best approach is to trigger this at the maximum level of charge to deal the highest damage. (Similar to the above video)

There is a default coating named Close Range Coating. This coating come with every bow as default. It will increase attack but the range is limit. However, it’s still better than nothing.

If this look a little overwhelming, you can easily start off with Power Coating. This straight up increase your damage and most bows will be able to use this coating.

While Bow is pretty straight forward to be used. To master it, you will need to well aware of the Charging mechanic. Otherwise, you will end up with those frustrating 1 or 2 Damage similar to a stone from the Slinger 🙂

To effectively use the Charge, you can either fall to the traditional holding R2 and shoot after go to a charge. However, combos is also a good way to deliver powerful shot without spending the time to charge. Below are some common way to quickly deliver some powerful shot that reduce the charge time.

Being the most powerful attack of Bow, this move allow the hunter to deliver a devastating shot to a target. To use this effectively, there are several key things you need to note:

What happen to this poor Dogogama?

One of the first thing to take in mind is that Bow use a lot of stamina while using. Stamina is used while you charge your arrow (holding R2) Dashing, and unleash Dragon Piercer.

With that in mind, one of your priority from the beginning with Monster hunter World’s bow is to get yourself some Energy Drink, and know how to craft Dash Juice.

Next off would be know what skills is needed for a constant shooting hunt. The following Armor Skills is your allies when using bow:

For Bow, there are several specific armor skills that will boosts your attack further. These are mostly get in armor pieces. To have these armor skills as jewels, you will definitely need a lot of luck.

Dragon Piercer all the way!

As mentioned, there will be two main play styles (or more if you think of something else :)) for the bow. One is a semi-support build associated with Affinity and utilize various coating types. This allowing the hunter to quickly apply abnormal statuses to monsters while dealing elemental damage. This build will give you the chance to use various types of Bows (To switch elemental)

The other is straight up raw damage focus. This will lack the high affinity skills, as most of the bow that has high base damage come with minus affinity stat. But this is compensated by the high base damage and allow the hunter to deliver powerful shots.

Adding a little color to truly be “Azure”

For this build, I used the Drachen set one more time. As this set come with pretty high Affinity Stat like Critical Boosts and Critical Chance. However, this is pretty versatile. You can either switch this out with Nergigante Chest and Leg for a quick 3 points in Stamina Surge – a pretty powerful skill for Bow build.

Before we start, let take a quick look at the armor skills of this build

Rathalos Bonus is a great addition for any elemental build.

This build will remove most of the fancy Affinity booster skills and focus on the base damage of the bow. Some of the skills are still there as it’s universal for any bow build. You can also notice Non Elemental Boost has been added.

For the elemental build, as the focus is Affinity, Drachen Chest and Vambraces were used.

These two pieces will quickly give you the following armor skills:

For Helm, Rath Soul Beta was used for one point in Critical Boost and one piece for Critical Element. As we need one more pieces of Rath Armor to gain this skill, Rath Soul Coil Alpha is added, this come with the sweet Piercing Shots (Increase attack power of Dragon Piercer)

Lavasioth leg will give you boosts in Power Shot

For this build, one again Nergigante come to the rescue. Nergigante Mail Beta and Nergigante Coil Alpha come in for Chest and Waist. This quickly give you the following Armor Skills:

Another change is in helm. While you will get minus Affinity Rate for using a Raw Damage Bow, you can either max out the damage by using any helm that has Attack Boost, or Weakness Exploit (Increase affinity when hitting weak spots) to compensate for the minus Affinity Rate.

I personally used Dragonking Eyepatch Alpha to “heal” the minus Affinity stat.

For elemental build, Xeno Metora was picked thank to its versatile in coating types and will further expand by having two level 3 jewel slots. This cool looking bow also come with 15% Affinity and 180 Dragon Element. To top it off, this bow also has Elder Seal

Speaking of Raw Damage, you can easily guess the contender Cera Coilbender was picked as it’s made from the Diablos – one of the weapon tree that has highest damage output. No element (not counting that hidden Ice elemental) minus Affinity and high base damage (264) You have yourself a classic Diablo Weapon.

For Charm, I personally used Master Charm. Mentioned in my previous guide for Insect Glaive Monster Hunter World – Insect Glaive Guides and Builds This charm give you 3 points in Critical boosts and is a great addition to any build that need boosts to Affinity. However, as charm are situational, you can switch in any utilities charm that suit your play style.

For Jewels, Bow build will require more of these shiny than other to fully maximize it’s power. Below are a quick look at how it’s going to be

As stamina is your key resource, Constitution booster is your key skill. This will come with Physique Jewel 2. Other utilities jewels is still the same, you may need Attack Jewel (If you are super lucky) or some elemental booster skills.

Finally, you will need some luck to got your hand a Mighty Bow Jewel 2

This rare skill will step up your Bow gameplay

This is one of the universal skill for Bow, allowing you to have one more charge level (more damage) Most of the armors above consist various slot level, you can easily slot these fancy jewels into the set and make up the ultimate build.

Monster Hunter World Bow certainly comes with many improvements in both control and gameplay wise. If you are trying to switch weapon for your next journey, why not picking this classic hunter weapon up?

There are several builds and play style for this weapon, the above is just some suggestions on what you can do with it. Do you have some unique builds using MHW Bow? Drop a comment below!