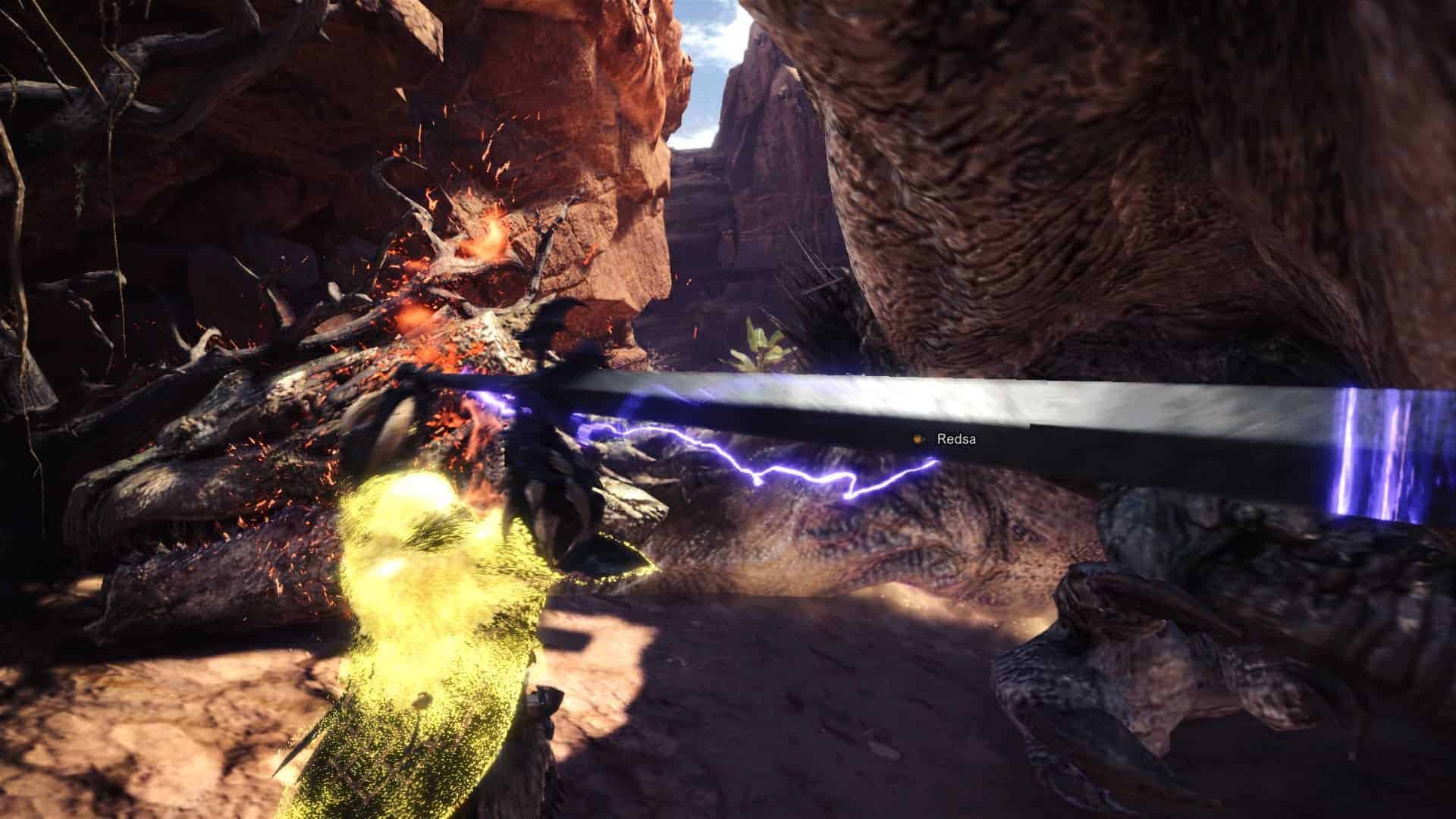 With the current meta, the best Charge Blades are as below:

If you are new to Monster Hunter: World and want to pick up the Charge Blades, take a look at my in-depth guide for Charge Blades below:

The posts above covered the basic and advances tips/ combo of Charge Blades in Monster Hunter World.

Mentioned in my Charge Blade in-depth guides. This big bad Charge Blade earn it’s place just for one reason – Damage.This weapons start at 828 Base Damage while offering some Ice Element (Hidden though) You will need the Free Element Skill to unlock this. Did you know Diablos is also weak to Ice? 🙂

While the final form require 3 monsters material. It worth it in the end. Because both Phial Damage & The SAED doesn’t got crit. This is the best weapon for your Raw Damage Charge Blade build.

Obtain randomly by completing the 16 players quest Banquet in the Earthen Hall. This Charge Blade bear some resemblance to Diablo Tyrannis II (if not the same) and featuring the same base attack damage and affinity.

The only difference is the defense bonus it gives. This is an alternative to Diablo Tyrannis II build, in case you want to have some changes in the comestic side. For myself personally, as I already augmented the Tyrannis with Health and Damage. I picked up the Taroth Strongarm “Horn” for a change in augment to Affinity and Health.

Obtained from the Mission: Code Red quest. This weapon come to Monster Hunter: World in a collaboration event. An iconic weapon from Devil May Cry series, Dante’s Devil Sword is a charge blade in disguise.

Right off the bat, we can notice the base damage are pretty good for an Event Weapon – 720 Damage. This weapon also has 180 in Thunder Element. It’s hidden by the way, meaning you will need the Free Element Skill in your armor set.

Finally, the icing on the cake is that Phials of this weapon is Impact Phial, and will give you the ability to KO monsters if all your phials blast are on point.

Give that Dragon a taste of the Devil Hunter’s Sword!

Yes, one again, this beast appear in a list. In Monster Hunter World, Nergigante was featured as a iconic monster in both the cover, demos and in the story itself. Of course Capcom will not let the weapons/ armors from this guy having some bad stats.

Final Form of the weapon, true to it’s name

This rarity 8 Charge Blade come with good base damage, zero affinity and finally 150 Dragon. This is also come with the Elder Seal ability – which allow the hunter to seal the special abilities of those Elder Dragons (Teostra – Fire Armor is an example) This weapon is your go to when you in need of some quick run with the Elder Dragons.

By the look, you can easily see that this is not merely an ordinary weapon, coming from the world eater. This pack a lot of punch with 792 damage and 210 in Dragon element

In the current meta, this Charge Blade is outclassed by Diablo Tyrannis II and Taroth Strongarm “Horn”, but it is still a viable to combat those monsters weak to Dragon Element (Behemoth)

The first version will need to be forged.

While the first version is pretty straight forward. The final form requires some unique materials below:

Almost everything related to Devil Jo looks scary, including this Charge Blade. Imagine the shield become the chainsaw when you are mounting that poor Kulu Yaku 🙂 This weapon earn it’s place with the power of the World Eater. There is also a catch when the stat of this weapon and the Nergigante one look similar. One is the Elder Dragon Eater, the other is the “World” Eater.

Finally, this comes equipped with Power Element Phial – a type of Phial that determines the damage when Phials explode. Here is what I mentioned in my previous Charge Blade guides.

With that in mind, this weapon downside is the time it takes to get this. To many hunters, this hunt is a little difficult once you first accept the quest. So this may take some practice before earning yourself a powerful weapon.

The initial version did clarify that this is representing a flame

One more Elder Dragon material before you can get this super-badass looking weapon.

This is also one of the Charge Blade in the game come naturally with White Sharpness (Without any skills needed) Did I mention about the Affinity? This Charge Blade is also one of the weapon that comes with a very high-affinity stat – 25% If you utilize the full set of Odogaron, you will easily hit the 50% Affinity Rate stat. Finally, you can cope that with the Weakness Exploit skill and bam, you got yourself a 100% Crit weapon.

However, the base damage is pretty low – starting at 576 Damage. This will need some modifications to make sure you get the best out of it. (Other skill that help increase attack)

It will not be completed without another iconic monster of  the series – Rathalos – Fire breathing red dragon Talking a bout video games tropes.

This cool looking fire element Charge Blade is made with a huge tribute to Rathalos. An iconic monster of the series, while it does not offer the highest damage. This comes with the unique Power Element Phial (The explosion of Phial will be the element of the weapon) This is your go-to choice when you fight those Monsters that weak to Fire or simply want to take some good pictures 🙂

All the Charge Blades mentioned before this are under Impact Phial – meaning your Phial Blast of SAED can inflict stun damage.

If you need a quick Charge Blade build for Iceborne, here you go. The Halberion Blade already has 240 in Fire Damage, combine this with Blaze Jewel (just two as there is a limit cap) and you had yourself a nice set for the cold world of MHW Iceborne!

This is the current most powerful Ice Charge Blade in the game and will be your best pal when you need to take down the Lunastra or Teostra. This is situational though, but if you prefer some sparkling effect instead of those phial blast, this is the choice.

Kajárr Stronarm “Ice” start off with 480 Ice Damage and Critical Element on the weapon itself. With just one augmentin Health for some comfortable SAED spamming, and you are all good.

Below is a build from mhwbuilds.net – an awesome source for Charge Blade user out there!

Similar to its brother, this is situational for monster that are weak to Lighting (Kulve Taroth phase 1 – 3, Nergigante and Daora) And the build is pretty much the same. However, if you are “poor” consider some “poverty” builds propose by the pros

This is one of them, no gamma armor needed, and Damacus Beta is brought in to boosts your Focus.

And MHW Charge Blade also got an update in the moveset section! Make sure you know how to perform the new move just as you pulled off that Guard Point!

While there is a variety of Charge Blades for your choices, in the end, it’s all come down to how you combine the weapon in to your armor set. For Charge Blade, many hunters choose the Diablo Tyrannis II as their main and incorporate other armor to boosts raw damage and phial impact damage. The reason is the phials damage does not count as raw and is not affect by affinity. However, most of the armor skills/ charms for this build require grinding and will definitely take some of your time before you can use it to the fullest.

In the end. Pick a weapon base on your liking and stick with it. The best weapons is the one you like and feel comfortable using. Happy Hunting!