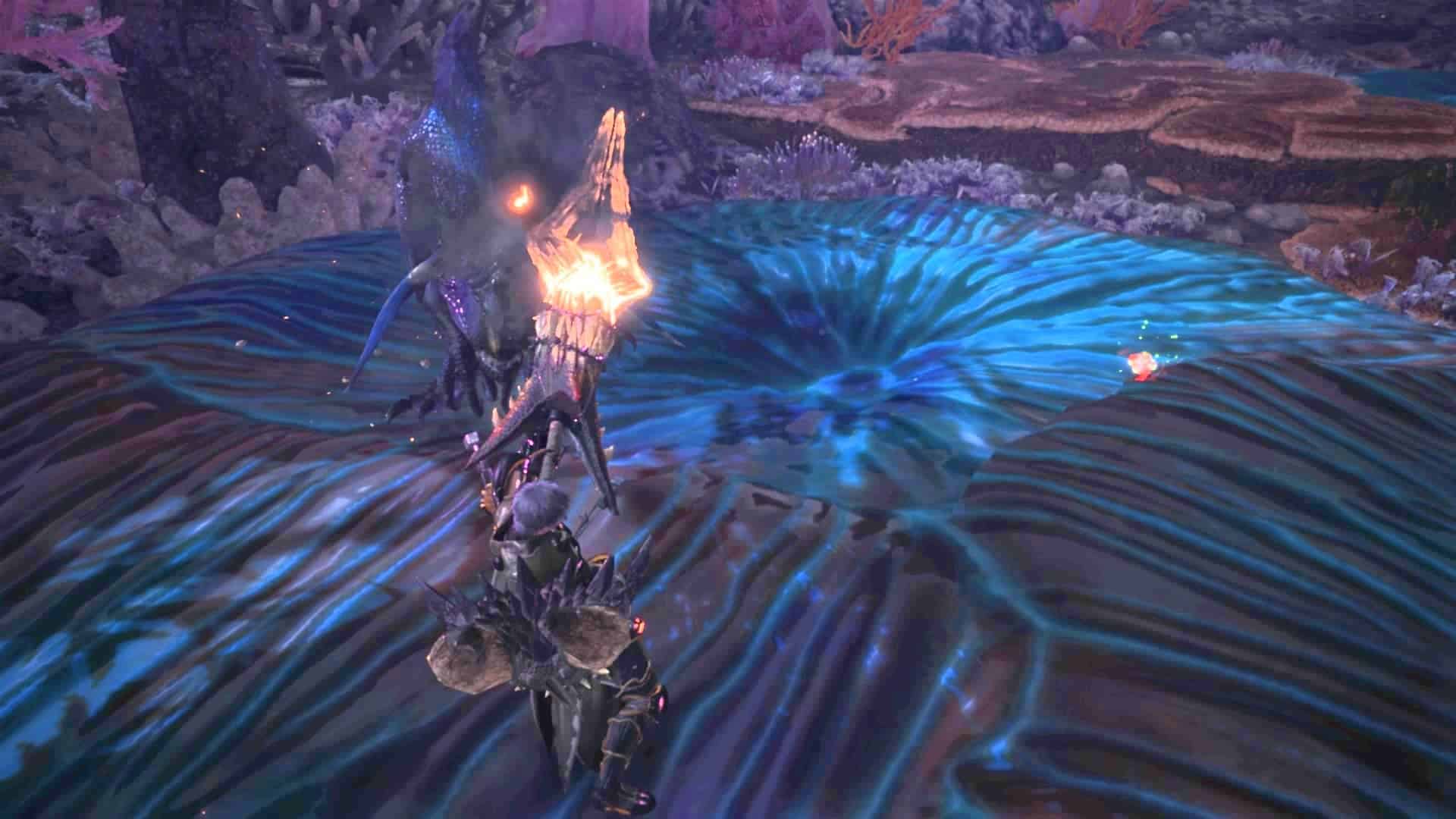 This is just updated as the current meta has changed. If you are looking for a best GunLance builds now, Check out the GunLance Meta Builds section below. GunLance has also got an update on the moveset in the upcoming MHW Iceborne release (26 – September for Consoles) Did you check it out?

At first glance, this weapon doesn’t have much different with the Lance. This also contains the same moveset with its brother at some part. Now come to the unique part.

GunLance attacks also capable of “shooting” out an explosion dealing more damage on each attack. You can either use these separately as “Shell Attacks” or give a full blow with the Burst Attacks.

This basic combo is similar to GunLance’s brother. Just three mid-range thrust. Simple, but powerful and can incorporate with the hop below to become an infinite combo

Just like Lance in previous Monster Hunter games, this allow the hunter to do a small hop backward or to the side, dodging incoming attacks. While it’s not cover a good range similar to roll in other weapons. This ability allow the player to perform infinite combos.

This is thanks to the fact that the jump will reset the current combos and you can start things off again.

Lunging Upthrust – Simple as it look, this attack is capable of reaching difficult parts of the monster and also a great opener

Being one of the biggest shield in the game. GunLance shield has the ability to block the most powerful attacks. With skills like Guards or Guards up. This will make you become the tanker in no time.

More like a poke 🙂 Lower damage than the normal attacks, but can help in some situations.

GunLance Guard is very powerful, if you prefer a tanker approach armor skills such as Guard or Guards up is a superb addition.

at the end of any attacks

With the addition of Shell Types (More Below), These attacks allow GunLance user deliver devastating combos and attacks while impressing their fellow hunters.

You can initiate the Shell Attacks by pressing

directly. The number of shots will varied depend on your Shell Level.

You can also charged up your shell attack by pressing

This ability is affected by the Focus Armor Skill

This is the bread n butter when using Shell attacks. This allow you to reload quicker than the normal one. And can be done why you perform any attacks

Notes: Another variant of this attack is the Aerial Burst. While airborne (Jumping attack, or after a slide) If you press

mid-air, a full burst can be triggered. This attack can also be chained to Wyrmstake Cannon upon landing by pressing

Tired of single shot? Why not unleash all of those shells? This poweful attack will use up all of your shells in exchange for a full blown explosion to the monster face. This synergise pretty well with Normal Shell Type GunLance (Has the highest number of Shells)

New move introduce in Monster Hunter World. This attack charge up the tip of the GunLance and deliver a devastating explosion to their face!

Notes: However, this attack can only be used once in a while. After initiated, the tips of the GunLance will be red – indicating cool down period, you can use this attack again once it changed back to normal.

Not stop at just the shot, GunLance allow hunters to pick between different Shelling Types. This will open up many different combinations and play-styles to this already bad-ass weapon. Below are the details of each type and when you should use it

With all those basic moves and abilities aside. Below are the things you need to “Git gudgood” with the GunLance.

The best combos for GunLance will depend on the Shelling Types you are using. But mostly will involve the Wyvern’s Fire  and Wyrmstake Cannon – The iconic move of GunLance in this version of Monster Hunters. However, the full Burst combo is also pretty common between GunLance players.

Let’s try out all of this combo and pick one for your situation:

… (Hop and repeat the combo)

As usual, As all of the normal attacks using

can be end with

for another Shell Shot. You can incorporate

according to the Shell Types for the best result (Hold

when it’s Long Type, or press when it’s Wide GunLance)

Tips: As the dodge will reset your combo, this can be utilized as a canceling animation to continue your big damage combo.

after two shelling attacks. Below are some combos that finish with this powerful impaling attack:

– for full Burst if needed)

This is the longest combo of the GunLance, however this deliver the highest damage in one single flow. However, due to the execution time, this will leave you some openings. Use this whenever the monster is down or trapped.

If you are switching weapon and was using Charge Blade before, pretty much all your armor sets can be re-used. The reasons? Three keys armor skills  of the GunLance are all there!

If you are using a non elemental weapon, this skill is a superb addition. special armor skill you get when equipping 4 pieces of Diablo Armor Set (Both Negro and the normal set give out this bonus) However,

Of course, there are still other skills that can be put in to suit your playstyle and further empower the DPS of GunLance.

Sharpness boosts – This time, these skills are the best additions to a GunLance build. Because the sharpness will reduce very quickly when you initiate any Shell attacks.

Another Azure build, it’s just because I can’t change the color of dat Dodogama pant!

This was used when I equipped the Nergi Gun Lance

Walking your way to High-Rank

n Monster Hunter World. The journey from HR 1 to HR 16 (23 in some case if you spend a lot of time hunting monsters instead of progress) can be done via the main story pretty easily.

In my two previous guides, we have checked the Jagras Tree and the Diablos family.

Today, we will encounter another classic monster – The Rathian. Surprisingly Rathian provides one of the best GunLance with normal types Shell. Giving you decent damage while providing the full Burst Damage bonus.

Rathian Weapon – One of the best Normal Type GunLance

When you first join the High Rank – your main goal should be getting the essentials items to make the hunter stronger. One of the first things the game won’t tell (or very ambiguous) is the Power/ Armor Charm items.

These little items can be purchased in the Tradeyard shop. You can also upgrade these two items with Bazelgeuse part – whic h mean this flying-dropping-bombs monster should be your first priority target for HR.

And again, you will also face the Nergigante. This monster provides some way of testing your skill during High Rank, and provide the materials/ parts needed for some highest DPS weapons in the game. Actually, it’s pretty sweet for Capcom to create a monster that can be used for any builds. The weapons and armor from this guy are pretty dope.

And now, let’s take a look at the build in a close

With everything setup out of the way, let’s see what parts make up this build:

Drachen Vambraces is picked up again for the hand. With that Attack Gem you got in the quest, this can give you 2 points in Attack Boosts

For my Waist, Nergigante was used again, for two points in Attack Boosts complete the full 4 level of Attack Boosts.

For Head Armor, I go with Dragonking Eyepatch Alpha –  a safe choice when it’s come to High-Rank armor. I also added a gem here to maximum the Weakness Exploit

Damacus Mail Beta is my Chest Armor. This provides with another core skill:

This time, the Beta version give me 3 level 1 slots, in which I put in 2 Health Boosts gems and one Recovery Gem, just for the sake of being healthier.

Follow other builds this is basically your side kick for the main set. I personally use Charms as an add-in for the build. However, most of the “good” armor skills Charms are pretty late game. It will take you quite some time to get all the needed components.

In this case, depending on your choices, any decoration that helps enhance the above skill is possible. I personally use the Artillery Charm Level 3 for three points in Artillery. This will give a big bonus to each of the Shell attacks.

You can also equip Exploiter Charm to maximize the Weakness Exploit but it’s entirely your call.

For Jewels, you can supplement armor skills that help increase Guard or Guard up. Evade Extender is also a great skill to get for those “Hop”. As best jewels only happen in late game, it may take some of your time to find these shiny decorations. Basically the end game content is just to get this sweet loot!

After my last 4 switches over. Luckily I had a good grasp at the materials in Monster Hunter World. So I started my experience with GunLance from the infamous Nergigante – Eradication Flame (Shelling Level 2 & Under the Wide Shelling Type) However, this weapon has very low Shell Level (2) Allow you to only have 3 Shells at max (with Capacity Boosts)

Depend on your liking, you can either choose between Long, Wide, or Normal Shelling Types. Each one of them has its own benefits. Below are some of the choices you can pick.

This beast has the highest damage in the entire tree, but got a minus affinity stat. However, it’s still a great choice for those charge Shell Attacks

That’s B52 monster weapon is not bad either, having Blast element, this help you wreak havoc on the Monster Body parts.

What’s a list if it’s not contain Diablos weapon? This weapon can also benefit from the Non Elemental Boosts skill. With Three augmentation slots, you can also improve the damage further, or simply negate the Minus Affinity point.

The above build was my starter build when you first starting on High Rank with GunLance as main. For a proper end-game build, you will need to grab several jewels and farming Arc-Tempered monsters to get the Gamma Set.

Prefer to blast away instead of just poking? Here you go.

As shelling attacks will eat away your sharpness in matter of second, you will need some tweak to make a Shell builds viable and sustainable. There are some mechanic that does not explain very well in the game, like Protective Polish + Power Prolonger. Check out the below to see why we will need both.

One of the best Normal Shell Gunlance after all those Arch-Tempered!

Prefer to shoot with every attack?

Hope this show you the fun parts of this powerful weapon in Monster Hunter World. If you decide to have some fresh change, this is the time! Monster Hunter World GunLance is a good pick for hunters who are already familiar with Charge Blade or Lance. Providing high damage while keeping a decent defense power.