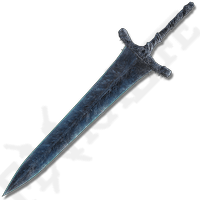 The Dark Moon Greatsword weapon can be found at the following location:

This weapon cannot be infused with Ashes of War

Can’t be enchanted with Magicor boosted by Consumables.

This weapon has a unique R2, which fires a projectile when buffed by its skill.

The projectile does 35 stance damage.

The buffed R2’s Projectile is affected by Godfrey Icon, Warrior Jar Shard and Shard of Alexander talismans. Axe Talisman has no effect

With Update 1.07, the weapon’s blade itself was given damage detection while imbued with its skill. This allows the Axe Talisman to activate if using charged attacks against an enemy if the blade is within distance.