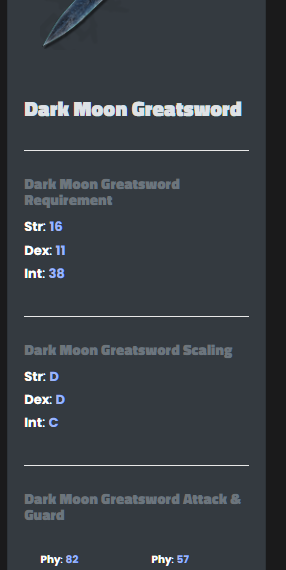 The Dark Moon Greatsword is one of the most classic weapons in the Souls series. Initial appears in Demon Souls, this weapon appears in almost every Souls game so far.

In Elden Ring, Darkmoon Greatsword is also one of the legendary weapons in the game that scales with Intelligence. Dark Moon Greatsword also come with the Moonlight Greatsword skill – imbue your blade with Ice and increase Magic attack power.

This is the best weapon if you are looking for the best Int build in Elden Ring.

Check out this page to see how to get this weapon.

For Flasks, as you will have a lot of Focus Point for your spells, a focus on FP flasks are required to have an optimal playstyle.

For Talismans, the following are used:

Any armor that keeps you at medium rolling is good enough. Some recommendation is as follow:

As this is an Elden Ring Int Build, you will spend most of your time casting spells, but as a Mage with a big Sword, most of your spells will involve swinging the Dark Moon Greatsword first (To trigger the buff and look cool) and bombarding the screen with Magic Particles.

If you are looking for an Intelligence build for your next playthrough of Elden Ring, then this Dark Moon Greatsword Build is one of the best to pick.

While Dark Moon Greatsword is the main weapon for this build, you can also use Sword of Nigh and Flame – a weapon capable of casting two different spells at the cost of FP.