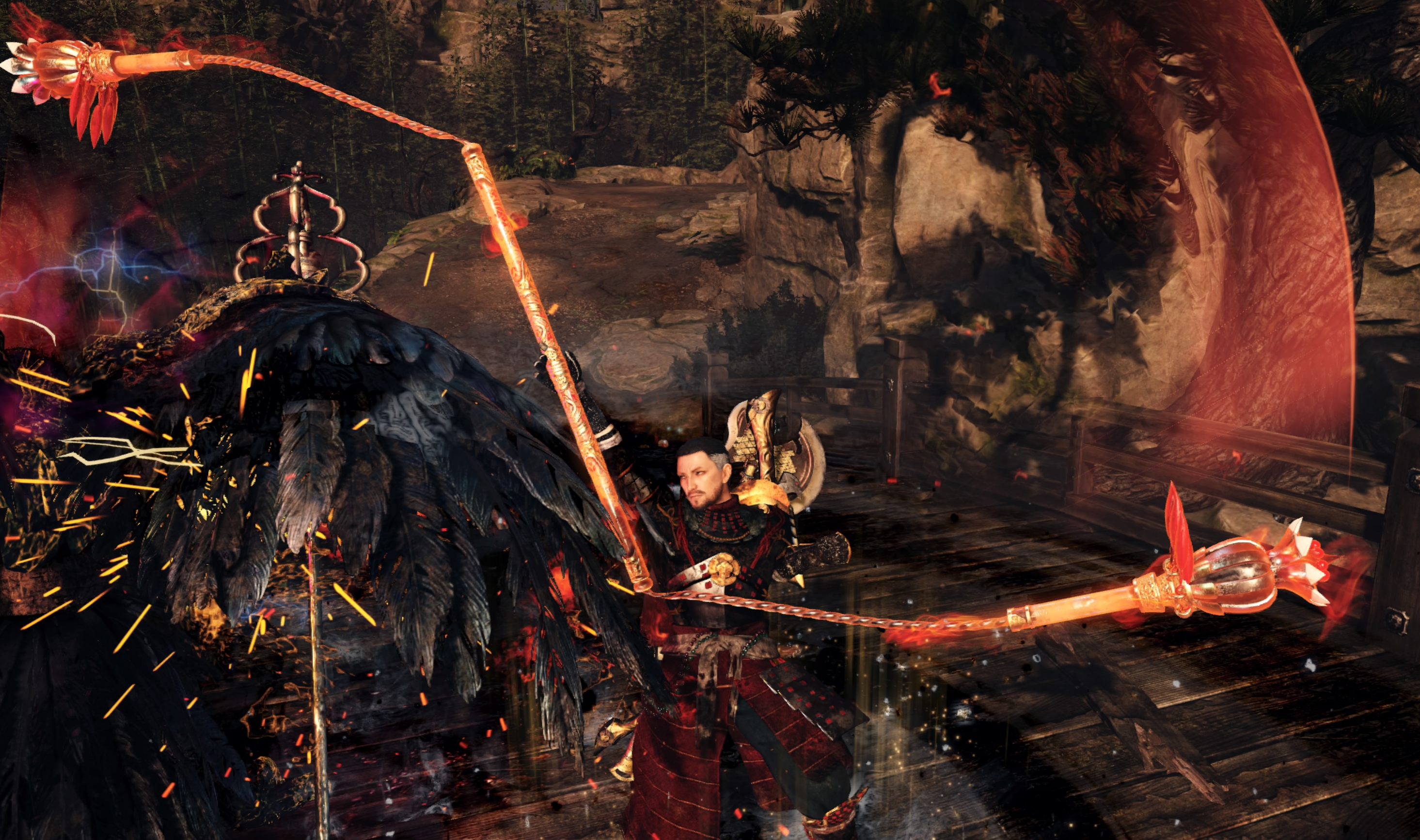 The Tengu Discipline is the first DLC content for Nioh 2 – featuring a new story arc with Yoshitshune – a historical figure that appears in various Samurai Warriors games.

In this DLC, Nioh 2 also introduces Splitstaff – a new weapon that can change between two forms:

Splitstaff scale with Magic – Same scale with Switch Glaive. This makes Onmyo Magic build an easy switch to this new weapon. Although the main stat is Magic, Splitstaff requires some skill to master its combo and attacks.

It combines the fast attack speed of tonfa and the Target Combo of Spear. The Splitstaff is also good for applying abnormal statuses to the enemies thanks to it’s multi-hit on Extended mode.

This works by holding down the attack buttons (Square or Triangle) when performing a combo. Instead of the normal attack, both ends of the staff will be extended and enhance the reach of your attacks.

Despite the versatility of the Splitstaff moveset, some of the attacks are better off with the default mode.

I found the most useful attack is the Strong Attack in High Stance. In extended mode, this attack has further reach and good potential for the lure in the enemy.

Similar to the previous DLC of Nioh. There new armor set that goes along with a new weapon. This time, Splitstaff armor set is the Benkei’s armor set.

This has the same mechanic as Water Sword of Dual Sword, with a better range and a bonus to Damage if you drain your stamina during this skill. The Attack bonus can be hard to trigger if the enemies constantly to attack you.

This skill can be used against big bosses that do not have good speed and mostly stay stationary.

This spinning staff move can help you with those human enemies. A full combo can significantly reduce the Ki Bar.

As this is a DLC weapon – meaning it happens after the Story mode, we will all assume that you already maxed out one of the stats and currently looking for a new weapon.

If your main weapon was Switch Glaive, switching to Splitstaff requires almost to no change – as Splitstaff scale with Magic.

Updated for Nioh 2 PC: From Dream of the Wise, you can go past 99, and Magic is still the best stat to go for Splitstaff.

If you picked Benkei’s Armor, you will need around 60 Stamina to accumulate his full armor set. While this increases your equipment weight and stamina recovery rate, the Benkei’s Armor set provides a 15% Melee Damage at 7 pieces and has a pretty good Defense stat.

As Splitstaff scale with Magic, below armor sets can be a good pick to boost your elemental damage. You can also combine two different armor sets to get some initial bonuses.

There are two types of armor to pick when you choose the Splitstaff. You can combine Genmei Armor Set for a boost to your Onmyo Magic Power, along with some general Melee Armor Set. At 4 pieces, you also grant the ability to weaken enemies’s defense with Onmyo Magic skill, this can be a huge boost to those Shikigami.

Another Onmyo Armor Set is the Onmyo Austerity, the 3 pieces bonus is useless with Splitstaff, but it can provide a nice boost to damage at 5 pieces

In Dream of the Demon, you can also create armor with the “Grace bonus” – which provides a similar effect to armor set bonus but can appear on any weapons/ armor that you found or craft along the way. The downside is finding these equipment are poorly base on your luck, and can take you a lot of time to have the full set.

The best Grace Bonus for Splitstaff build is the Inari’s Grace. These bonuses have a strong focus on Onmyo Magic Power, which in turn enhance your gameplay with Splitstaff

You can combine both the normal boost to Onmyo Magic Power from those armor set and craft a full Inari set as well.

The main Armor set in the DLC that scale with Splitstaff is Benkei’s Armor, If you want to use this one, then Stamina is the must-have stat. The main reason is because Benkei’s Armor – much like the boss himself, is pretty heavy. Even with 99 Stamina, I still got a 72% on the Weight stat (C)

This armor set has a big boost to damage at 7 pieces and is good when you are from another weapon that are already focus on Stamina (Axe, Heavy Armor Builds…)

Benkei’s Armor set also had an Axe and a Switch Glaive, however, Benkei’s Axe does not count as one piece of the set, so you can still use them for the full experience of Benkei.

The best options on the weapon should be the below:

For Onmyo Magic, as you progress through the game and use Talisman, you can then unlock new points to spend on this tree. As Splitstaff will require you to max out Magic, don’t hesitate to try out all the combinations.

The typical setup for Switch Staff is one Shikigami of any type (Fire/Lighting/Water) and a Talisman of the other element. This is to trigger the Confused ailment on enemies – which will increase your damage toward them.

For example, you can pick Fire Talisman and Water Shikigami for bosses that are susceptible to all those two elements.

If you prefer a more general approach, then almost all Yokais are susceptible to Purification Talisman.

Finally, Sloth/ Weakness Talisman is a good addition to your Onmyo Magic Playstyle. These talismans can be used to give you a better advantage in fight.

Splitstaff playstyle is pretty similar to Switchglaive, as you will need to apply elemental statuses to the enemies before fighting. You can set up some Shikigami prior to the fights and wait for the statuses to kick in.

Applying double statuses will trigger the Confused ailments – which increase your damage for a short time.

For Human opponents, both Unruly Revolution and the Shin Crusher combo can be used to break their Ki. If you like, you can always use Shockstopper for a more technical knock down

Nioh 2 will have two more DLCs after Tengu’s Disciple. Before trying out two more new weapons, make sure to master all of the existing 14 weapons of Nioh!

ethugamer March 20, 2020 No Comments
A Magic focus builds using Nioh 2 Switchglaive – a new weapon in the game. Want to check what stat scale with what weapon a …
Read More

ethugamer April 1, 2020 No Comments
https://www.youtube.com/watch?v=48QlAlsATnI I have just created the Nioh 2 Stat Calculator! With the quarantine, I am not sure what to do so I have decided to develop …
Read More

ethugamer April 3, 2020 No Comments
After Hatchet Build and Odachi Build in my previous guides, I decided to return to one of my favorite weapons in Nioh – The Dual …
Read More

ethugamer April 4, 2020 No Comments
A coffee for the writer! Check out Nioh 2 Builds List here (Will be updated periodically) The Odachi is one of the two DLC weapons of Nioh. …
Read More

ethugamer April 8, 2020 No Comments
This is my first build for Kusarigama, this build is done after I finished my second playthrough on Dream of the Strong Table Of ContentsNioh 2 …
Read More

ethugamer August 10, 2020 2 Comments
Looking for a Splitstaff build for Nioh 2? We got you covered. Splitstaff is the latest weapon for Nioh 2 – The Action RPG set …
Read More
Related Posts