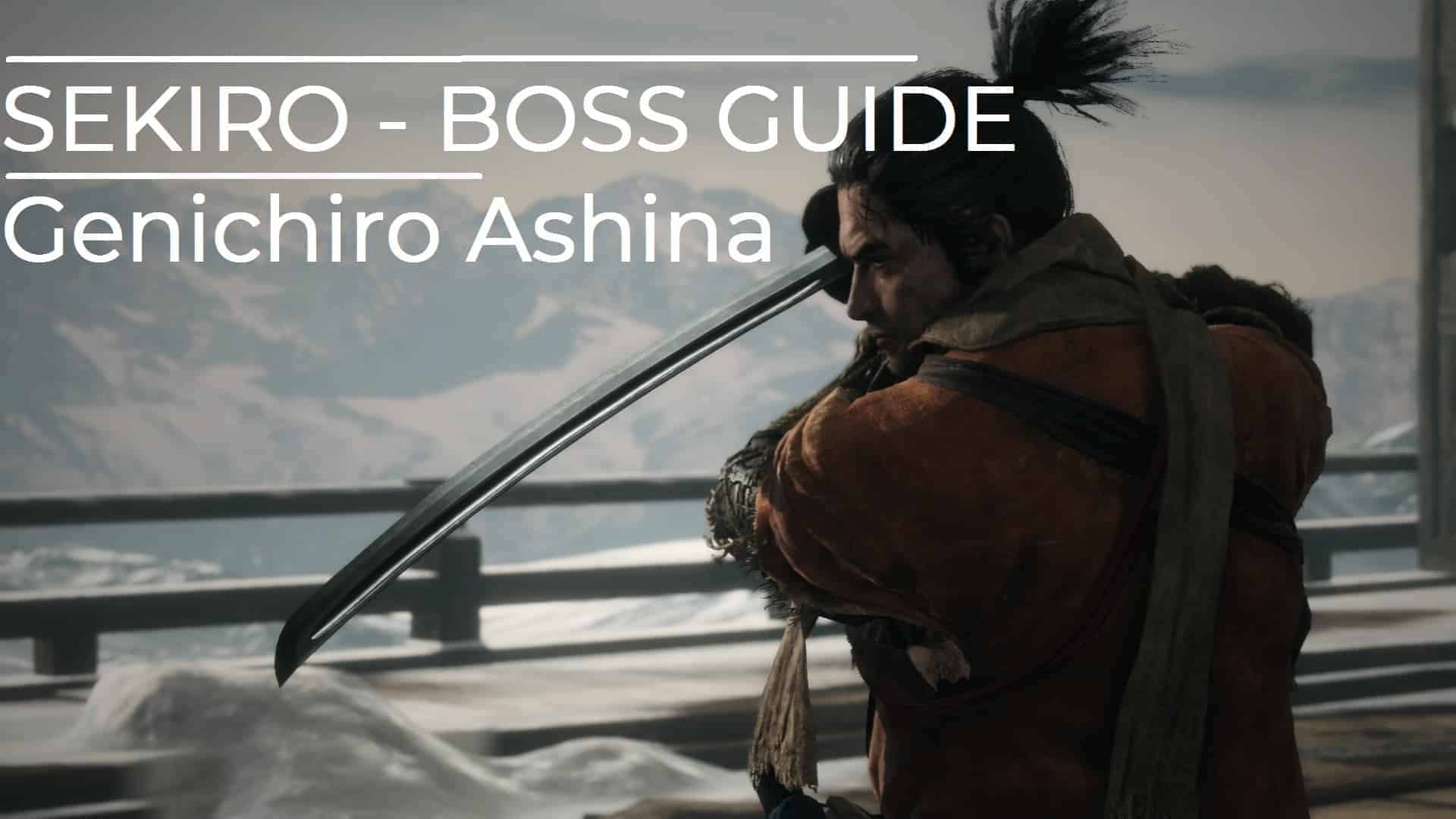 Howdy, so these days I stopped playing Monster Hunter World and Anthem for a while. Drowning myself in Devil May Cry 5 and the new IP from From Software – Sekiro: Shadow Die twice.

You will get to this boss at Ashina Castle – the Upper Tower area. This is after the mini-boss Ashina Elite. This is the man you have already seen in trailers – who is responsible for taking the hand of Wolf, our main character.

How hard is he?

I would say pretty hard. It took me around 3 hours first time seeing this guy. Being the leader of the clan, this guy has it all – physical prowess, sword training, and bow

That big bow is not for nothing.

Being the leader of the clan, he is capable of all the special moves you have seen so far (Sweep, Thrust & Grab) Throughout the fight, he will occasionally follow up any of his normal attacks with these kinds of move. The best case scenario is you jump kick the Sweep attack, counter the Thrust attack with Circle (B for Xbox One) and Dodge the Grab (But it will not happen for the first time. Trust me.)

That seems impossible! How can I beat him?!

This boss shows how good From Software is when it comes to designing boss. It consist of s all the game mechanics, and requires your understanding to finally triump on the battle.

I personally started off this fight with Souls Style gameplay in my mind, leading to countless deaths and inflict the Dragon Rot to almost all of the NPCs 🙂

If you are wondering what Souls Style is – It basically consists of close in for a hit and dodges away abusing the i-frame of the animation. Why it is not everyone’s playstyle, I am pretty sure it got into players mind at some point.

Turn out, this does not have an effect here. The reasons? The dodge in Sekiro is simply a back hop cover just half of the boss’s attack range. Meaning you still get hit by the attack even if you dodge at last minute.

To defeat this guy, your go to option is to stand and deflecting his attacks at the right time. This is also to build up his posture damage – a key mechanic in Sekiro Another thing to note is don’t be afraid to be on the offensive, as this boss (or any Sekiro’s other bosses) are very actively with his attacks. Below is an in-depth guide on approaching this fight.

He will welcome you with his arrow and follow up with an elegance roll slash. You can quickly deflect the arrow, and then either attack him right away or deflect his roll attack. Next, you will need to return the favor. While this does no damage, he will be forced to throw you another attack, and this is your chance to deflect.

Add the third deflect, he will perform the following moves:

The second variation are less likely to happen (to my experience) With that said, it may suprise you when it happen, just remember to deflect all those arrow and continue attack him.

Most of the time he will just perform a jump slash and follow up with a quick thrust. Both attack are capable of killing you if you get hit. While the first jump slash can be deflected, guessing the second attack may get tricky sometime. The key thing is the wind up before the attack, if you see his sword is right on the ground and start flashing, immediately pressing

(B on Xbox) to counter this with Mikiri’s thrust. This will also deal a huge posture damage and contribute for the killing blow.

You don’t need to wear out all of the boss HP in Sekiro. Thanks to the Posture system.

For the sweep attack, it will take longer before he perform the slash. As soon as you notice it is not a thrust (indicating by him turning his body) immediately press

(A on Xbox One) and hit X one more time once you drop down. This is another counter to sweep attack that deal huge posture damage.

Counter Sweep Attacks in Sekiro is pretty basic, just jump up and if you feel a little lucky, step another foot to the opponent Mario style to deal posture damage.

Even with this simple instruction, I still get hit by countless sweep from enemy. The reason mostly because of the reflexing to get out of harm way. You will probably hit Dodge (O or B) firstly before Jumping up.

Basically, you will repeat this process until his posture are broken, and delivering the Finishing blow.

But that’s not it…

This nail-biting boss (for the first time) still have one last trick up his sleeve. Once you finally finished off his two node of HPs. If you somehow used up all your Healing Gourds, prepare to retry one more time. Because Genichiro will have a transformation to another version, meaner and faster.

As the result of the first fight, all of his armor will be torned off, revealing burn marks and scar from a life long battle. This Genichiro is named “Genichiro, Way of Tomoe” indicating the new fighting style he used.

His first new attack in this form is the Lunge Attack. This does look fearsome and unblockable (to your Souls instinct) but it does! This is basically a thrust and you can easily counter this attack with a well time

Througout the fight, he will occasionally call out lighting and imbue the sword or the bow with lighting dealing damage in a super-wide radius. This look cool and all, but can end you in just one sweep.

Lighting Reversal – Your savior in this fight

Just before this fight, there is a scroll that teaches you to perform Lighting Reversal. This is your key move to counter his deadly lighting arrow and sword slash. With this knowledge, as soon as you see he perform these moves, just jump up and get hit by the attack, then land down by pressing R1 (RB on Xbox) This will immediately surge the lighting back to him, dealing triple your normal damage and keep him in a shocked state.

This is a video of how I defeating him.