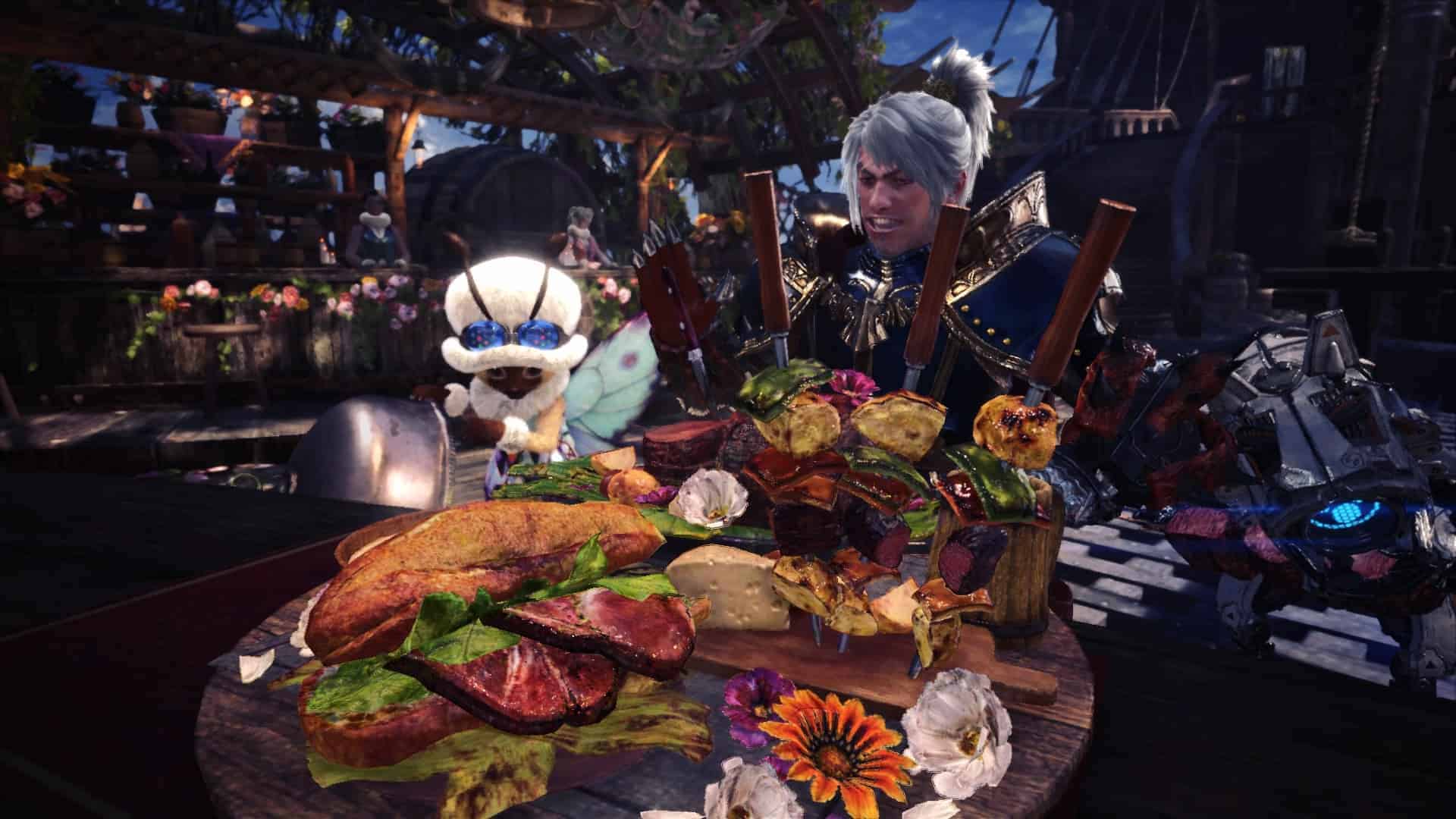 Introducing Monster Hunter World 101 – a summary of the things/ items you need to become a better hunter!

If you are new to Monster Hunter: World, there are high chances you will get lost in the overwhelming item list. Starting from the innocent rock that you picked up in the hunt to the fancy ore that you don’t know how you get. Items and materials are major components in Monster Hunters. Knowing the usage of these items is the key to master the art of monsters hunting.

For newcomers, these items can be overwhelming.

Pretty straightforward, these are the ones that help you survive the hunt and recover from that’s deadly Nergigante Dive-bomb.

Honey can also the first material you can get easily during your journey. It’s appear all over the five maps of Monster Hunter World.

Later game, you will encounter monster that has ability to set the area around it on fire and causing damage overtime. Making Cool Drink a great addition to your items

Learn to create a BBQ hunters!

A hunter must know how to utilize traps

These are what make you become a smart hunter. Traps are used to keep the monster at bay and save you some time or let you prepare for a big attack, there are many types of traps/ tool, below are some of the most used ones.

Remember to only use this when you know for sure that monsters are tired/weak. Capturing monster is one of two ways to complete the hunt.

As a tradition of the series, your natural instict whenever a monster is sleeping is to plant a bomb in front of their heads. This will also quickly reminds other players on the hunt on the tradition, and they will follow your lead.

Make sure you always carries two Mega-Barrel Bombs during any hunts!

No need for explanation…

A new feature of Monster Hunter: World – The slinger, this add to the versatility of play-styles, where you can use it to grapple and traverse high places or simply throwing distract at monsters.

Don’t look down on this small gadget, there are various “ammo” that you can pick up during the hunt or craft from inventory, below are some example:

These are pretty hidden to me (as a newbie in Monster Hunters series) This is unlocked after mission Guiding Zorah Magdaros. These small items help increase your stat by simply keeping them in your inventory. There are two types of charms:

Power Charm – Take up one inventory slot in compensating for damage

But it does not stop there – You can combine these Charm with Bazelgeuse Talon to turn it into the below:

The upgraded version of Armor Charm

You will need a Bazelgeuse Talon to upgrade these charms

Bazelgeuse – The B52 of Monster Hunters, hunting this down should be your first priority once step into high rank

You can also keep both Power Charm & Power Talon at the same time! This can add in more bonus to your ATK, but this depends on your play style as the downside of this is it take up 4 inventory slot.

With all the preparation, you are ready, but what about the actual hunt? Things may go south during the hunt as the monsters will change their pattern after a while. Below are some more tips to consider when you are transported to the map.

In the beginning, Monster Hunter World already reminds us that meal is an essential part of a hunt. This mechanic gives you additional boosts to your stat and gives us some easier time.

Make sure you are full before the fight hunters!

You can either pick a meal at Asteria’s canteen or choose a plump at any camp and pick a meal of your choice. The selection will expand along with the materials you can collect during your journey.

You can either choose a preset meal or pick a custom meal.

Some quick tips I gathered during my playthrough:

After sighting the monster, you will start the fight, but that’s not all to it, during this time, the monster will go through many stages and each time, their behaviour will change accordingly. Same as previous titles, HP Bar is a luxury thing in Monster Hunter, knowing these stages is your best bet to know when to wrap up the hunt.

Below is a list of stages that the monster will go through during the fight:

Chek out this  a full hunt of Rathalos, note the eye icon next to the monster is changed from White to Red and finally it becomes weak (indicating by movement)

If it flies, Flash it

It took me more than 60 hours to realize this simple trick. At first, I thought Flash Pod is a rare resource and rarely used it in fights. One day, I accidentally shot a flash toward the Rathalos when it was flying and bam, a whole new world open up to me.

During your journey, there will be many flying monsters starting from the fluffy Paolumu to the mighty Kushala Daora. These flying wyverns/ dragons (as the game categorized) unleashed there most powerful attacks while airborne. A Flash to their face will take these big monsters down to the ground. This offer a chance for your strongest attacks.

Take caution though, after two or three shots, the more powerful monsters will start to resist it, use this with caution!

While this is super helpful for starter when facing those love-the-sky monsters like Rathalos or Bazelguese. Beware the upgraded version of them though! Tempered Elder Dragons sometime immune to these flash (or at least has a better endurance to the Flash)

There are two ways to finish the hunt in Monster Hunter World, slaying them down and capturing. After capturing a monster, you can see the monster sleeping back at Asteria like this

Capture the monster for “research” purpose

The number of materials in between Capturing and Slaying the monster is a little different. According to my “research” here:

You can also try out yourself, just follow the simple steps – prepare some immobilize traps like Pitfall Trap or Shock Trap, some Tranq Bomb and make sure you don’t accidentally kill the monster.

Did you fight Greatest Jagras? This upgraded version of Great Jagras highlight the essential of Capturing the monster!

That’s for the basic stuff, Monster Hunter World has been released for a year now (With the Appreciation Fest going on as well) If you are new to the series, make sure you understand all the formalities of a hunter! If you are still deciding on which weapon to main, or to switch. Check out my guides below: