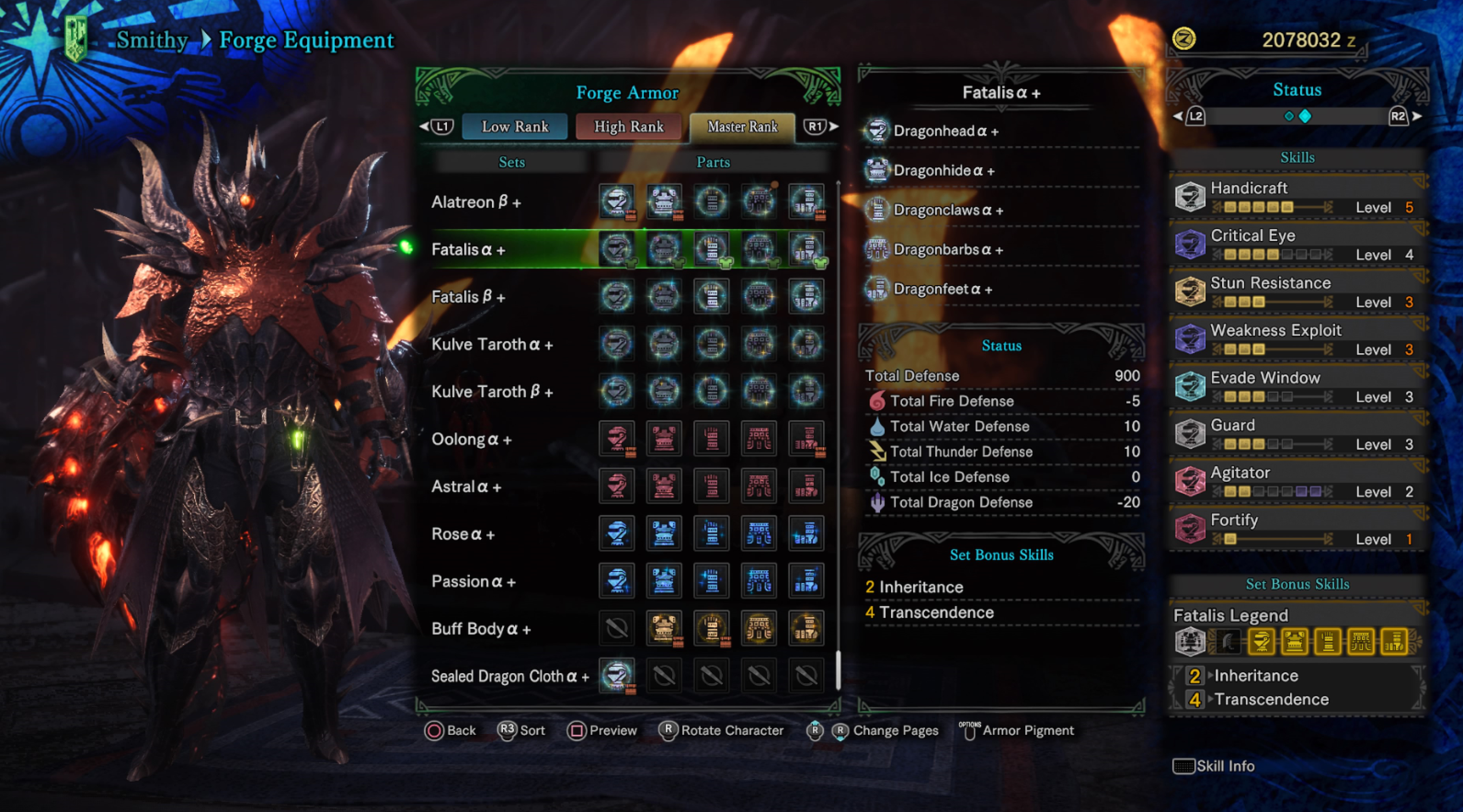 Looking for a Switch Axe Build? Did you know Switch Axe is one of the best weapon to use against Fatalis – The Black Dragon?

Below is a list of armor sets that is often used by hunters before Fatalis. You will need to stick with Agitator + Master Touch (MT) Meta for Switch Axe Buil.

With just the Chest and Leg Armor of Raging Brachydios, you have set one foot into the pre-Fatalis MHW Meta. Agitator Secret gives you a 20% boost to Affinity and more damage. With all those angry monsters, this is the easiest boost to your DPS in MHW Iceborne.

Teostra still remains meta with Master Touch, but now you can use the 2 Pieces of Raging Brachydios and 3 pieces of Teostra Armor.

This is the same for almost all Melee Weapons.

Safi’jiiva’s Dragonvein Awakening is still one of the best DPS increment in the meta. This combination is often used when you prefer more DPS and are confident with your playstyle.

To counter Dragonvein Awakening HP drain, you will always need to attack the monsters, this sound harder than it seems and will require you to know your weapon pretty well.

If you are new to elemental weapon builds, make sure to hunt down the Silver Rathalos to extinction!

Silversol Armor provides an entry way to elemental build with the True Critical Element armor skill bonus. The alpha variant also has a boost to Fire Attack, make it pretty easy to use if you looking for a Fire Build (Regardless of weapon)

Switch Axe is also one good elemental weapon in MHW Iceborne (Thanks to Zero Sum Element Discharge) so there will be several builds below featuring this Armor Set.

Alatreon introduces the Escadora Armor set. Right off the bat, this armor increases your Dragon Element, with two pieces equipped, you also get Element Conversion – which boosts your Elemental Damage base on your Elemental Resistance.

If you dropped Silversol Armor and is looking for an even more powerful elemental build, 3 pieces of Safi’jiiva (for Dragonvein Awakening) and 2 pieces of Escadora Armor (Element Conversion) will do the trick.

This mixed set is your go to when you need an elemental Switch Axe build.

The mother of meta build at the moment. Fatalis Armor basically erase all the previous meta build.

In earlier days of Alatreon’s appearances, you will guarantee to see random hunters come to the fight with Lightbreak weapon. This is the side effect of creating a new meta monster.

Lightbreak Axe (or Safi’s Shatteraxe) is definitely useless against Alatreon (Unless you already have a strong elemental build team) but for almost all monsters, it’s the most powerful weapon.

Lightbreak Axe is also easier to farm for compare to the previous Safi’s Shatter Axe. It has more sharpness as well.

This is your standard build for Switch Axe. The general boost from Agitator Secret and Blast boost from Brachydium Armor will enhance your Blast gameplay.

Coalescence – This skill increase your damage when you are inflicted with abnomal status. This is generally more usable on monster that can inflict Ice/Fire/Water blight (Velkhana, Alatreon, Namielle…)

An alternative to this build is to focus on Power Prolonger – The skill that enhances Switch Axe Sword Mode. You can drop those Flawless Vitality Jewel for Enhancer/ Vitality Jewel. The uptime of Sword Mode for Switch Axe can increase your DPS.

This is your go-to build for the Alatreon fight. , but requires you to have a certain skill with Switch Axe, as the HP drain will be pretty annoying if you don’t attack the monster often. Another way to counter this is to augment the weapon with Health Augmentation, with this, you may not want to use Resentment on this build, as the Health recovery will nullify the damage bonus from Resentment

Depends on your elemental of choices [Element] Jewel 4 will be used to enhances your Elemental Damage.

For Alatreon, both Fire & Ice Kjárr Axe is good to go. If you prefer something a little more orthodox, Kjárr Axe “Water” can also be used.

Despite most of Fatalis’s attack initiated from it’s head, you can safely Clutch claw to Fatalis during these attacks. This opens a new chance for Switch Axe hunter to use their most powerful attacks – Zero-Sum Element Discharge on the Black Dragon’s head. With the right build, this can both break Fatalis’s head (A key element in the fight) as well as dealing big damage to Fatalis

This build can be used against Fatalis as the Black Dragon has three stars weakness to Dragon element.

After beating Alatreon (or fail enough time to gather materials) You can then craft the Black Harvest – the best Dragon Switch Axe in the current meta.

Escadora Armor is also crafted from Alatreon. This armor set also had a focus on Dragon element. The Escadora Sheath Alpha alone gives you 4 points in Dragon Attack.

As mentioned in the Armor Section. The Element Conversion skill from Escadora Armor Set is a huge addition to Elemental meta. With just one Elemental Res Up meal, you get free elemental attack up for the whole hunt.

Combine this with the already powerful Safi’jiiva Armor, you get yourself the most powerful elemental Switch Axe build. I would say this is the best Switch Axe if it’s not so hard to farm for and require some skill to use.

Alternate Skills on this build

Both Power Prolonger and Resentment is totally dependent on your current level with Switch Axe. If you are already master the Switch Axe and can dash around the monster without taking any damage, Resentment from Escadora Wisdom is your go-to. This approach increases your DPS and will set you close to the level of speed runners.

However, speed run is not the meta! Sustain the fight and eventually complete it has more priority. Power Prolonger from Escadora arm can help you with this. You can also have slots to add Health Boost and Health Augment.

Still stuck at Fatalis? Not sure if you should continue? Check out this Fatalis build using Fatalis Armor and weapon and think again…

The Fatalis Armor (Both Alpha and Beta variant) basically put an end to all other meta Armor. The two pieces bonus basically unlock the level cap of any skills that has secret level cap to it (Agitator, Artillery, Divine Blessing…)

This unlocks several customizations for your build, and you can stay both Offense and Defense with just this armor set.

This is a typical Fatalis Switch Axe build. The Attack Boost/ Weakness Exploit are handled by Dragonhide and Dragonbarbs. The remaining job is just to maximize your Attack/ Utility.

The Escadora Armguards Alpha also gives you a nice Power Prolonger level 3 – which is the ultimatum of Switch Axe build.

True Fatalis End come with superb purple Sharpness, and you can enhance it with Handicraft Jewel.