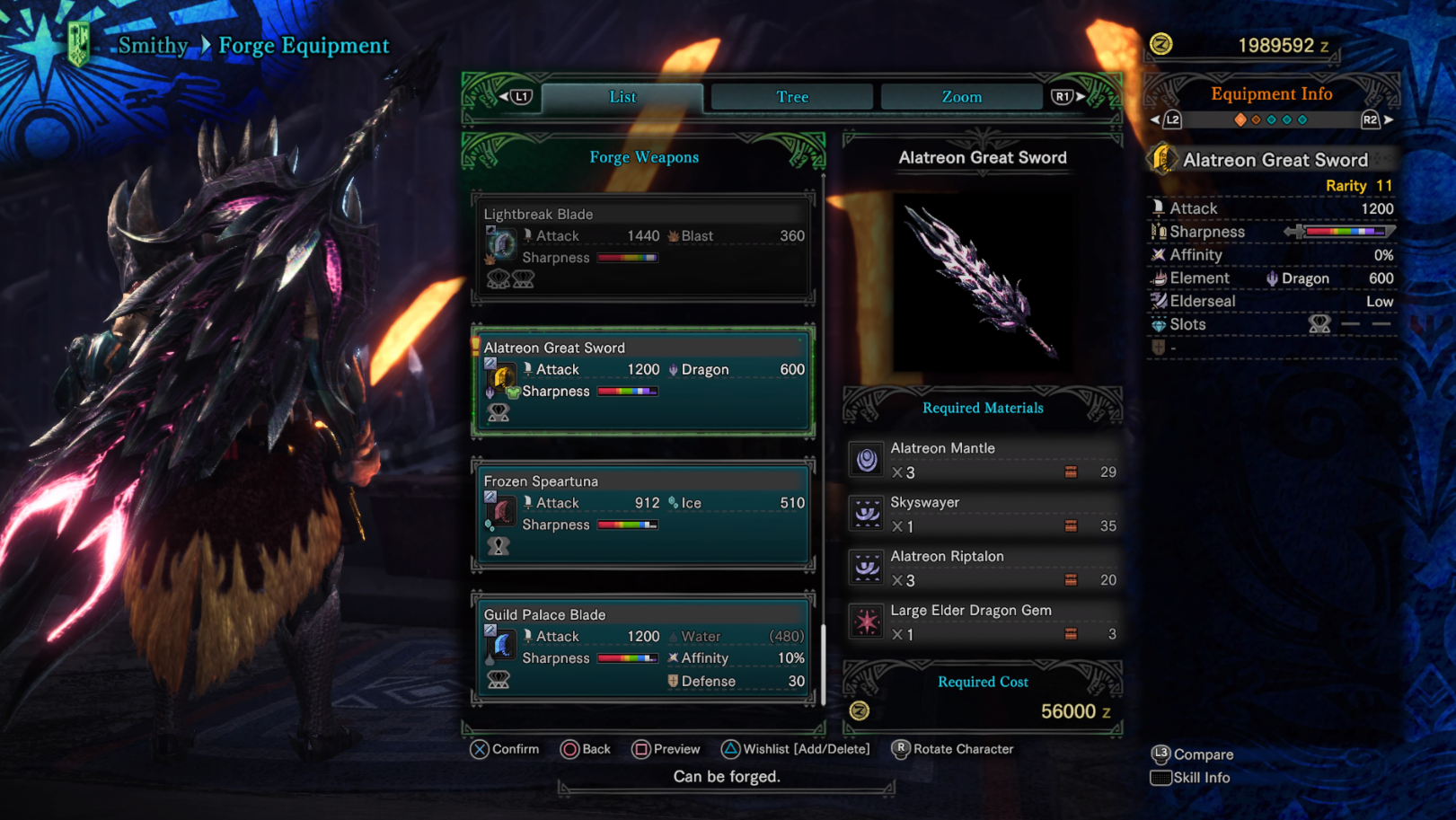 Sitting along with Hammer, Great Sword is one of the most classic weapon in Monster Hunter’s history.

Capcom has master the art of meta monster creation.

Raging Brachydios is by far the best monster update in the series. You got all the sweetest armor skills (Agitator, Artillery… ) from one set alone. This armor set also provides some of the best jewel slots for you to customize your meta build.

New players can easily use this armor set and go through Iceborne until the end game. Seasoned players can mix this set with other sets to get more useful skills. The best of both worlds!

With that said, Kaiser’s Armor are used here to trigger Master Touch – the Sharpness skill that dominate the meta since the release of Monster Hunter World.

All about the attack, True Dragonvein Awakening greatly boosts your attack while draining your HP. If you are still attacking the monster, the HP drained will be recovered.

Safi’jiiva armor set also provides you good skills like Critical Boosts, Attack Boost, reducing the number of rare jewels you need to find. This armor set also benefit from Resentment, as you will always have that red gauge to boost your damage.

This combination requires a more aggressive playstyle compare to your usual approach. Safi’jiiva Armor set bonus Dragonvein Awakening increases your DPS while draining your HP. If you continue attacking, after a brief of time, you will regain that HP.

This has a similar approach to full Safi’jiiva armor build, with a touch on Agitator Secret DPS boost from Brachydium Armor.

This is one unique build for Great Sword, Frostcraft from Velkhana introduces a boost to your DPS when the weapon is sheathed. Each attack will drain this gauge, and it can be recharged when your weapon is sheath again. Sound troublesome? Think again.

With Great Sword, you will always need to reposition yourself after every attack. Add in the sheathing part, and you got yourself a free DPS boosts!

As Rimeguard requires 4 pieces to activate Frostcraft, you will need some way to add in the Agitator Secret boost from Raging Brachydios. This is where Safi’jiiva Great Sword come in.

If you want to combine Velkhana and Raging Brachydios bonuses, you will need Vekhana Essence as one of the Awakening Skill in your Safi’jiiva Great Sword.

Satisfy with all the armors? Let check out the full detail of some GS Builds below

You will need to beat Alatreon before taking on Fatalis anyway, so here you go

For Alatreon, elemental GS is your best pick. Despite not being a good weapon for Elemental, you still can have pretty decent elemental damage from an appropriate GS Build.

You can use Attack Charm for a straight forward Damage Boost, but Frost Charm can also be pretty useful in this fight.

This build has higher DPS compare to the first Frostcraft Build with Kjarr GS, this is thanks to Agitator maxed out as well as a full blown upgrade on Element Damage on the Safi’s Frostsplitter.

This is your best set to go against Alatreon, but this requires some grinding as the Awaken skills on Safi’s Frostsplitter require some luck to get the correct one.

Lightbreak Blade is one of the easiest pick for GS Build. Use this with the Teostra + Raging Brachydios Armor and you are all set.

This armor set can be seen in almost any melee weapon builds. The different is the Charger/Vitality Jewel 4. Three of these will help you maximize Focus and Health boost.

Despite whatever builds you prefer, Health Boost is still one of those Quality of Life skills you needed for end game hunts.

Blast Attack from Kaiser Coil can also help you proc more Blast during the hunt. Although this is near to useless in multi play as Blast threshold is increased in multi play.

Some hard to find jewels in this build

Challenger Charm V does require some grinding in Guiding Land to upgrade as well.

Check out our updated Meta Builds and Weapon for Monster Hunter World!