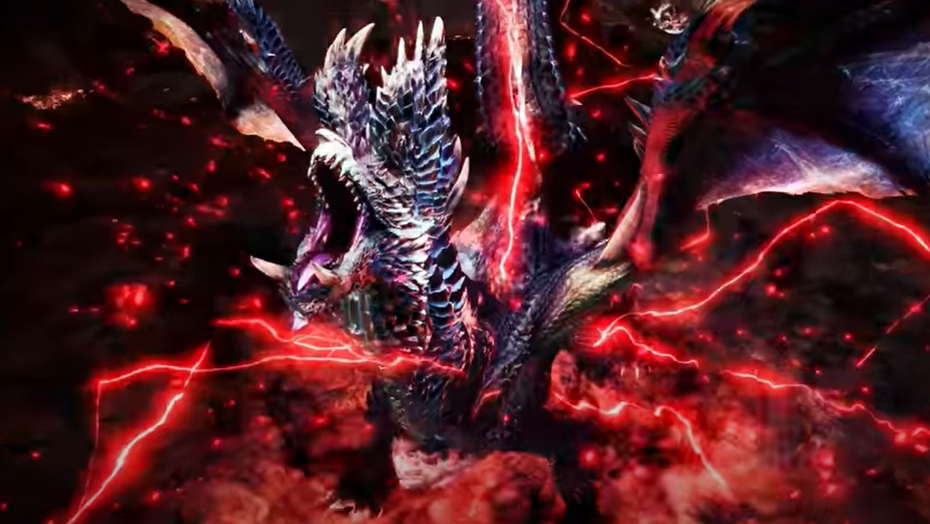 The most controversial ultimate of a monster in the Monster Hunter series so far. Escaton Judgement can wipe out your entire party in a single blast, and this ultimate happens around 6 minutes since the fight started.

To reduce the damage of Escaton Judgement, you have to cause enough elemental damage to Alatreon. This sounds simple but given the popularity of raw damage build, this is the most frustrating issue with Alatreon right now. Below are some quick tips to get through this devastating damage

While Alatreon’s attacks consist of multiple elements, most of it’s melee attacks are Dragon element. Dragon Blight will negate all your elemental attacks – making the fight virtually impossible to win.

This is basically the main thing to do when equipping for Alatreon, Blight resist will negate the Dragon Blight (Causing by his normal attacks) allow you to constantly deal elemental damage through out the fight.

While it’s switch to Ice, Fire is a new weakness. Make sure to plan your weapons accordingly. In the Special Assignment, Alatreon always starts with Fire Active.

Paralysis/Poison/Blast/Sleep build does not contribute to the DPS check for Escaton Judgement. This attack can wipe out your entire party, why bother with attacks that do not help reducing it’s damage?

In the Special Assignment quest – Alatreon will always start with Fire Active – making Ice weapon vital for success on this fight. The Taroth “Ice” variance is good for this, but it is best to have Kjarr weapon for the bonus on Critical Element.

After finishing the Special Assignment, Alatreon will be one of the story quest you need to fight. In this, Alatreon often start with Ice Active. This will need Fire weapons instead.

Below is the Actives that Alatreon start with, depend on the quest

Blazing black dragons, so named for resembling both lightning and darkness. They mercilessly tear apart whoever touches their sharp scales. Elementally unstable, their actions can affect the very weather. Living natural disasters.

Alatreon first appears in Monster Hunter 3 as the final boss of the game. This is the Elder Dragon that has the ability to control multiple elementals at the same time (Yes, before Namielle was cool)

In case you want to see Alatreon back in the low polygon era, here is a full fight of Alatreon in Monster Hunter Tri.

Alatreon is considered one of the most powerful Elder Dragon in the series, with the power of all Elder Dragons (Kushala Daora, Chemeleos, Lunastra and Teostra) combined

You think Namielle is already powerful with two elements at the same time? Think again!

Alatreon was first announced to be in Monster Hunter World Iceborne in March. but has been pushed back because of the lockdown happened from all over the world.

Initially suspected to be released on May, the final release date of this monster has been confirmed to be July 9, 2020.

The most unique trait of Alatreon is the ability to use multiple elemental at will, making the fight changes dramatically as the hunt prolong.

With the power of multiple elements, Alatreon has differents move when it is on the ground and in the air. In MHW Iceborne, this has been divided into three main forms:

Although Lighting is not a main “Active” of Alatreon, it can still unleash Lighting blast in Dragon Active

When changing between these actives, Alatreon will unleash Escaton Judgment. This is not a one-hit blast like Sapphire of the Emperor (Safi’jiiva most powerful attack) but the damage can destroy your tiny HP bar in a matter of seconds.

Escaton Judgment has similar wind up like Lunastra Nova Blast – which can deal with a huge amount of burning damage in a short time.

In the developer diary, this blast can reduce the full HP bar (With 3x Health Boost) in just 1 second.

With three different actives and can be triggered during the fight, the weakness of Alatreon will also change according to it’s current Active.

In the past, Alatreon is susceptible to Paralysis and Poison as well. If you prefer a more general approach, Blast Build with any weapons can be a good pick for this fight.

Escaton Judgment can be weakened by damaging Alatreon with elemental attacks

Alatreon Armor set in MHW Iceborne is designed with the features of it’s scale.

In MHW Iceborne, elemental builds have always been a focus since the end game. However, it still requires a lot of tuning to make the best out of an elemental build.

This time, simply slotting your armor with resistance jewels (Which are pretty easy to come by) can increase the corresponding elemental damage

Don’t tell me there is a cooler cat than this!

Alatreon’s Dual Blades consist of one smaller blades and a double edge blade.

A scythe weapon in Monster Hunter World? Your wish has come true.

I must say that picking the Scythe form for the Longsword is a pretty unique choice, but it’s design are pretty spot on with the black color from Alatreon’s material

MHW Alatreon’s materials (Not update as of this writing)

Not sure what element to picking against Alatreon? Capcom gives you all!

Similar to other powerful Elder Dragons fight, your best option, if you are not a powerful speedrunner, are as follow:

While Divine Blessing will give you a survival chance against Alatreon ferocious attacks. The elemental resistance boost is a little tricky. This is due to Alatreon’s Elemental Shift. There is no guarantee that it will use a certain element more than the other, so you can just pick whatever you are currently compatible with.

The best approach for Alatreon’s Elemental Shift would be forming a team with multiple elemental focus members, so each can shine during the fight.

What’s next after Alatreon?

The arrival of Alatreon also introduces Frostfang Barioth – a variant of Barioth with a stronger focus on Ice. This design is kind of similar to Shrieking Legiana and does not impress me very much.

The good thing about this new monster is the Armor – which makes you look like a White Tiger Warrior in the Snow. As usual, the stat of the armor will be different than the base one.

After this title update, Capcom also reveals the roadmap for MHW Iceborne for 2020. We will have our upcoming summer fest and will have a chance to collect all the rewards for various event quests

Make sure to equip the best weapons before fighting the Menacing Alatreon!

ethugamer June 30, 2020 No Comments
All PS Plus Free Games will be available for download from July 7 onward. From sport to action adventure, you got some treats in July …
Read More

Borderlands Legendary Collection will be released on May 29 [Nintendo Switch]

ethugamer May 26, 2020 No Comments
Borderlands Legendary Collection for Switch will be released on 29-May-2020. This edition contains Borderlands 1, 2 & Pre-Sequel along with DLCs for all three Borderlands …
Read More

ethugamer May 22, 2020 No Comments
Tired of being a dumb Goat and a troublesome Goose? Try to be a Shark!
Read More

ethugamer May 7, 2020 No Comments
Everything we know about Mortal Kombat 11: Aftermath – The DLC for one of the most popular fighting game of 2020
Read More