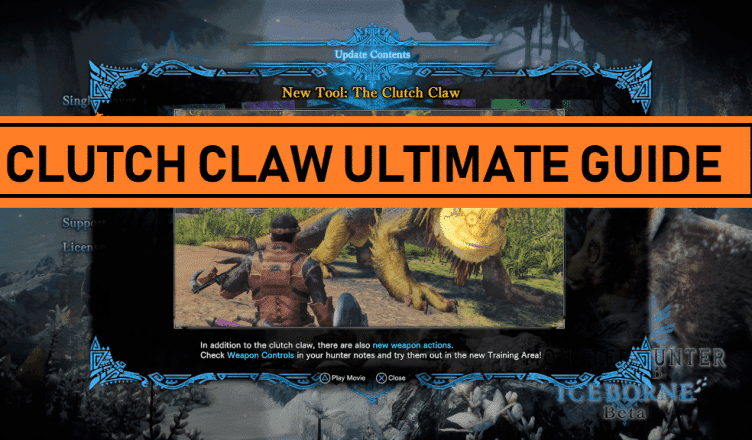 MHW Iceborne – How to perform the flinch shot and knock down the monster?

If the monster is flying, simply unleash the Flinch Shot while staying at the monster’s head, this will let you knock down it immediately!

The Clutch Claw is one of the newest addition to the hunter’s arsenal introducing in Monster Hunter World Iceborne. Not just a simple tool for the Slinger, the Clutch Claw let the hunter performs various actions that can significantly enhance your hunt.

At the very first glance, the only new thing for the Slinger is that you can now fire out the Slinger with all weapons during some special attacks.

However, it is definitely more than that. With the Clutch Claw, you can now use the Slinger to attach to the monster at any time at the cost of stamina.

During this animation, you can perform the following actions:

Attacking the monster using the Clutch Claw (Or you weapon) will weaken the monster part, and allow you to deal more damage to that part later on.

This make MHW Clutch Claw an essential tool in Master Rank. This is because the monster’s HP pool is way higher compared to Low and High Rank.

When you dealing damage to the weakened part, a small triangle icon will be displayed as an indicator.

To utilize the power of the Clutch Claw to the max, make sure you know when to use the Flinch shot, and when it is just the best to follow the normal route.

Below are several key things to note when using the Clutch Claw in MHW Iceborne:

As you will need all the time and space for a success Flinch Shot, mantle like Rock Steady can help you have a peaceful time picking the right moment to perform the Flinch Shot!

Sometimes you may not sure if your Flinch shot will knock down the monster. There are cases when the monster change it’s a course in a flash while it has already faced the wall. You can minimize this by pressing O/ B when sticking on it’s back and change its direction a few time to align the shot.

Want to see all new Master Rank Armor and it’s armor skills? We got you covered!