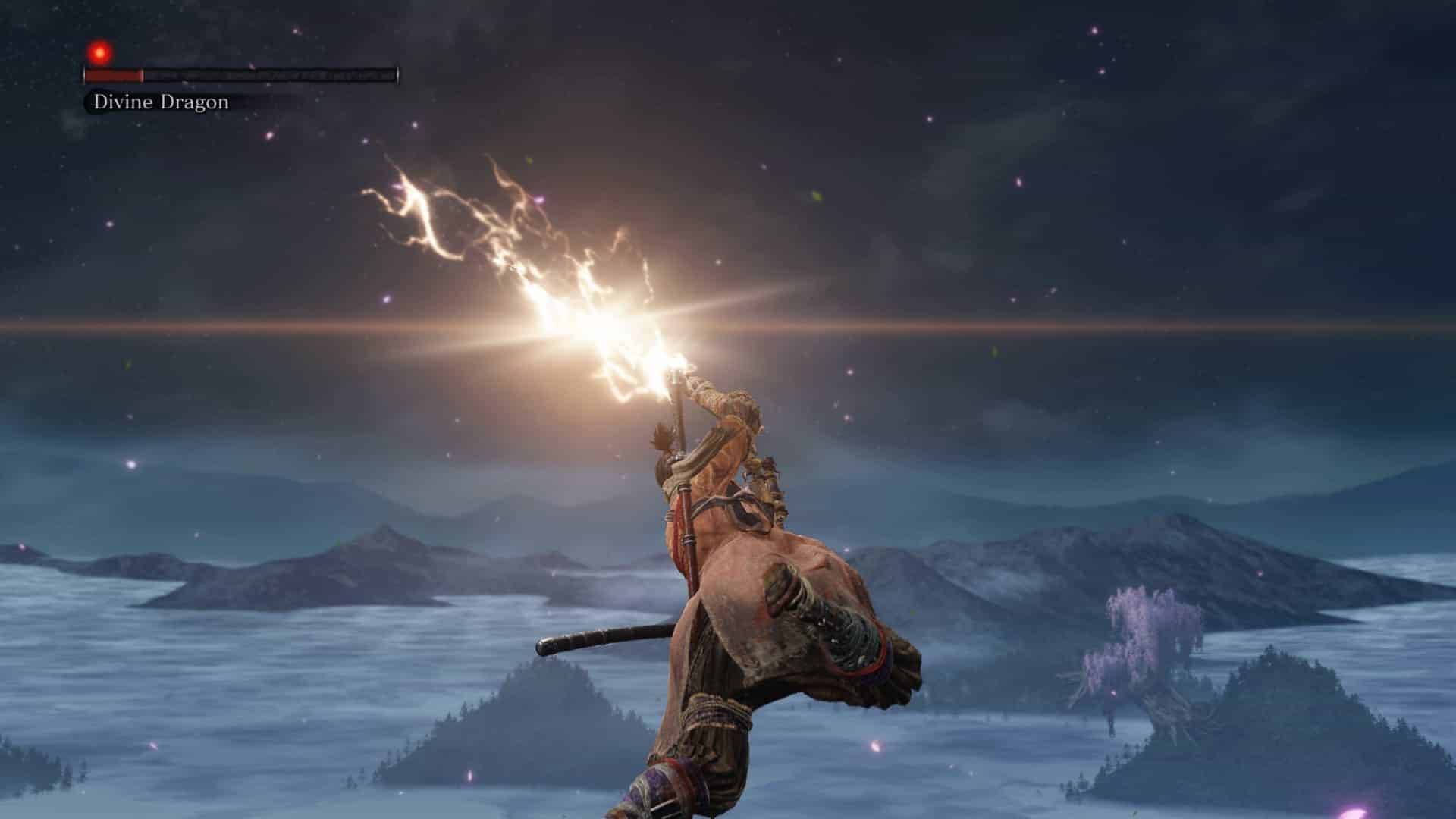 After defeating Owl and obtain the last item for the ritual. You will then journey to the last location of Sekiro Shadows Die Twice. The experience here can be compared to those stories you often hear in Japanese folklore. A place where times stopped and covered with remnants of a long lost kingdom. You will face several mythical creatures here, but ultimately, you will end up facing the most sacred creatures of them all.

The fight starts off with an unexpected foe. You will need to face several old-tree-dragons. While they don’t have any special moveset, they heavily rely on the numbers to dispatch one arm wolf.

After defeating two or more old dragons, the tree will be summoned upon the ground (4 of them) Just running sideways as soon as you saw the ground trembling with dust. There is also a neat trick here. You can quickly grapple to one of the trees and perform a Deathblow from above to one of the Old Dragon, this will also trigger a wide arc attack to all the enemies around, making the fight a lot easier. After dealing with the Ugly ones, you will be introduced to the main event.

This is your main foe in this boss fight, the Dragon’s Tear is the final ingredient for Sekiro quest. However, to get it, you must first overcome the battle with this creature.

The fight starts off with Wolf get knockback by a huge wind storm by the Dragon. Below is the moveset of the Divine Dragon

This is not a hard fight compare to what you have faced prior to this.

Again, as soon as the fight started, you will notice another four trees emerged from the ground. One out of four trees will be marked with a lighting line, indicating lighting will sooner or later strike upon the ground. The main flow of the fight is to evade his attacks while looking for the nearest tree with lighting mark.

As soon as you grapple to a tree with this mark, Wolf will be struck by lighting and have a chance to diverse that back to the Dragon. This is the very same technique you used to overcome Genichiro Way of Tomoe. The trick here is to make sure the lighting land. The Divine Dragon will twist his body when he performs any attacks. If you land the Lighting right at this point, you probably miss him. You can either delay your Lighting Shot a little after catching it, this will increase the chance of hitting him.

Another method is to grapple when you know he is just about to finish his attack. As you grapple on the tree, he will slowly back to his starting position, this will guarantee a hit as soon as you catch the lighting. During this period, if you miss or landed an attack to the Dragon, he will perform a Whirlwind to knock you away. And the lighting will appear on another tree.

After nearly filling up his posture bar, all four trees will disappear. And you will have to wait for them to appear once again to finish the Divine Dragon once and for all. During this phase, his attacks will be more aggressive, all of the Shock Wave Slash will have more hits, and he will also perform that normal Slash more often, make dodging him to be more difficult.

Your main task in this phase is to survive until the trees appear again. As soon as they appear, just repeat the process once more time. This time, delay the shot until he finally tries to devour you. If you land this shot, Wolf can perform a subsequent deathblow and finish the Divine Dragon.

Upon finishing him off, you will see Gracious Gif of Tear, and obtain the Dragon’s Tear. After this, you will be automatically teleported back to Ashina Castle at Kuro’s room.