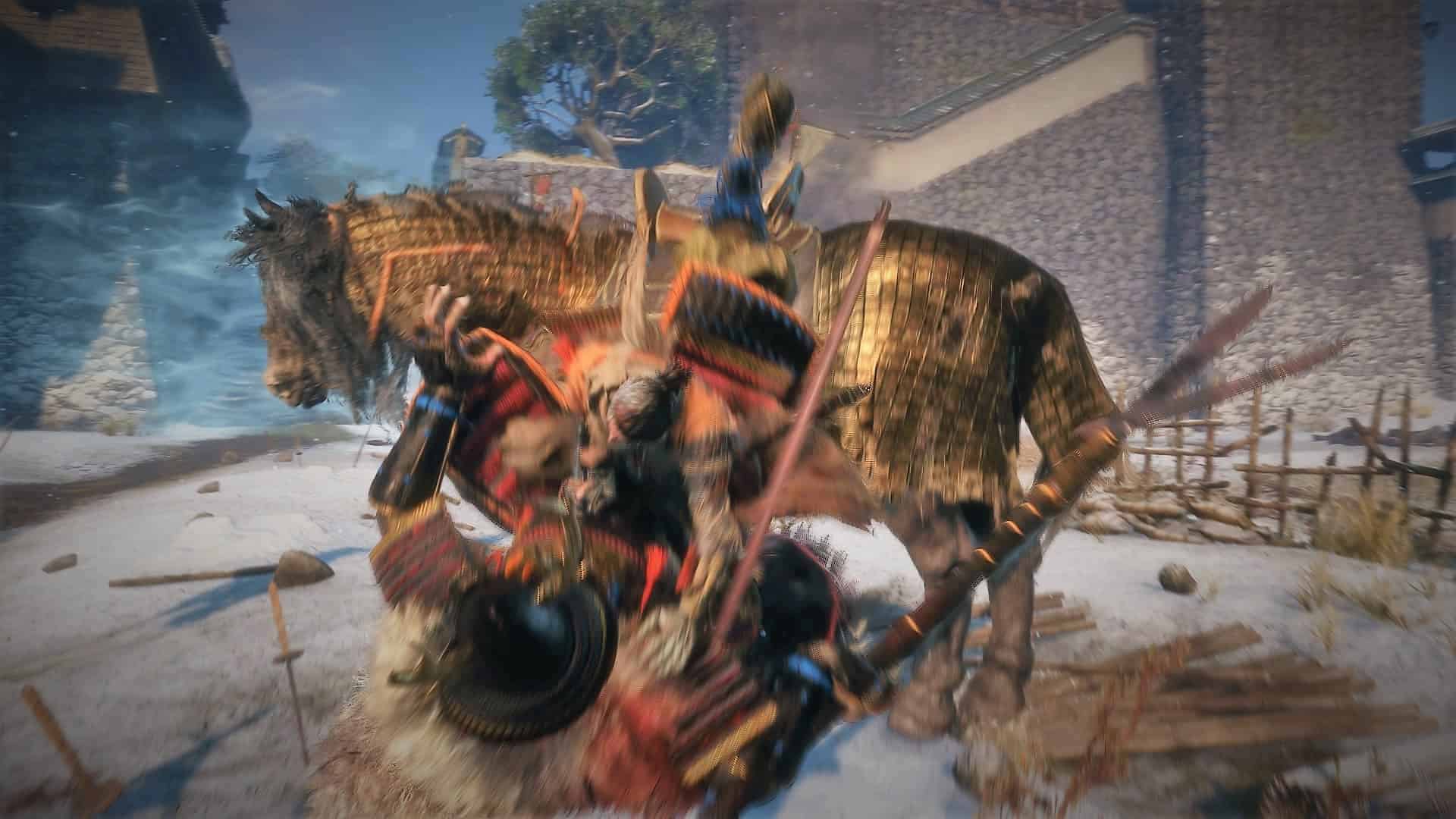 Passing the Ashina Outskirt at the beginning of Sekiro will provide you with a lot of feeling I believe. For the players that experienced Tenchu before, nostalgia can evoke from those grappling hook to the rooftops. The stealth kill animation is also directly a node from the classic Tenchu series as well.

But after those fight again the Ogre and the two Samurais you will quickly experience a flashback of the Souls series (the different is the kanji screen) all again.

Finally, after all of those obstacles, you somehow arrive at the entrance to Ashina Castle. But well, jump down on the open area of the battlefield, you surely know what happens next…

Just around 5 seconds after you land on this area, you will be introduced to Gyobu Oniwa, the officer that tasked to protect the Ashina Gate by Genichiro. His horse is also bigger than usual though (Not just that horse, everything in Ashina is somehow bigger than your normal person)

Thankfully, he did not jump on the ground and start another fight – a common setting for bosses with a mount

All of Gyoubu Oniwa’s moves are performed on horseback, and his spear is designed just for that:

This looks almost impossible as this boss constantly moving around during the fight. All of the attacks also cover a pretty decent range.

Actually, this is how Sekiro shows you the importance of diversity in combat as well. Right before this fight, you will notice a scene where a soldier is mourning on his dead horse, and mention on the explosion of gun powder makes cause the death of the horse. This is the same as the tips we hear first time facing the Ogre.

The Prosthetic Tool for this fight is the Shinobi Fire Cracker. To obtain this, you first need to buy the special item Robert’s Fire Cracker in one of the Offering Merchant. This guy can be found at Ashina Outskirt.

This prosthetic tool will let you use the explosion from the powder to scare off beasts. This can stagger Gyobu Oniwa for a good 3 seconds. This leaves you an opening to attack him. He will occasionally counter with a quick turn slash.

Don’t try to spam the Shinobi Fire Cracker, as it doesn’t have the effect right away. Try to maitain a short period between each uses.

This fight is one of the first proper boss fights in Sekiro Shadows Die Twice as well. You should abandon the Souls style playstyle at this point. If you try to dodge while he closing in, you are guaranteed to get hit as his spear range cover a very long distance. The safer option is to stand and deflect his attack. As soon as he close in, prepare to press L1 to deflect his sweep. If the combo is too long for you, dodge away and wait for his opening

Gyobu Oniwa also has several openings for the Prosthetic Grapple as well. This happens when he turns his direction and during his 360 Spear Spin attack. Using this chance to close in and land attacks on him. If you have not upgraded the Grappling Hook Attack under the Prosthetic Arts skills. It is time to do just that. This does not provide the best damage, but this skill is capable of staggering this boss for a period of time.

That basically it, this fight may take a while for newbie as you are still getting familiar with the pace of Sekiro Shadows Die Twice. The motto for this fight is to be on the offensive and unleash on your power!

This allows you to upgrade the Prosthetic Arm