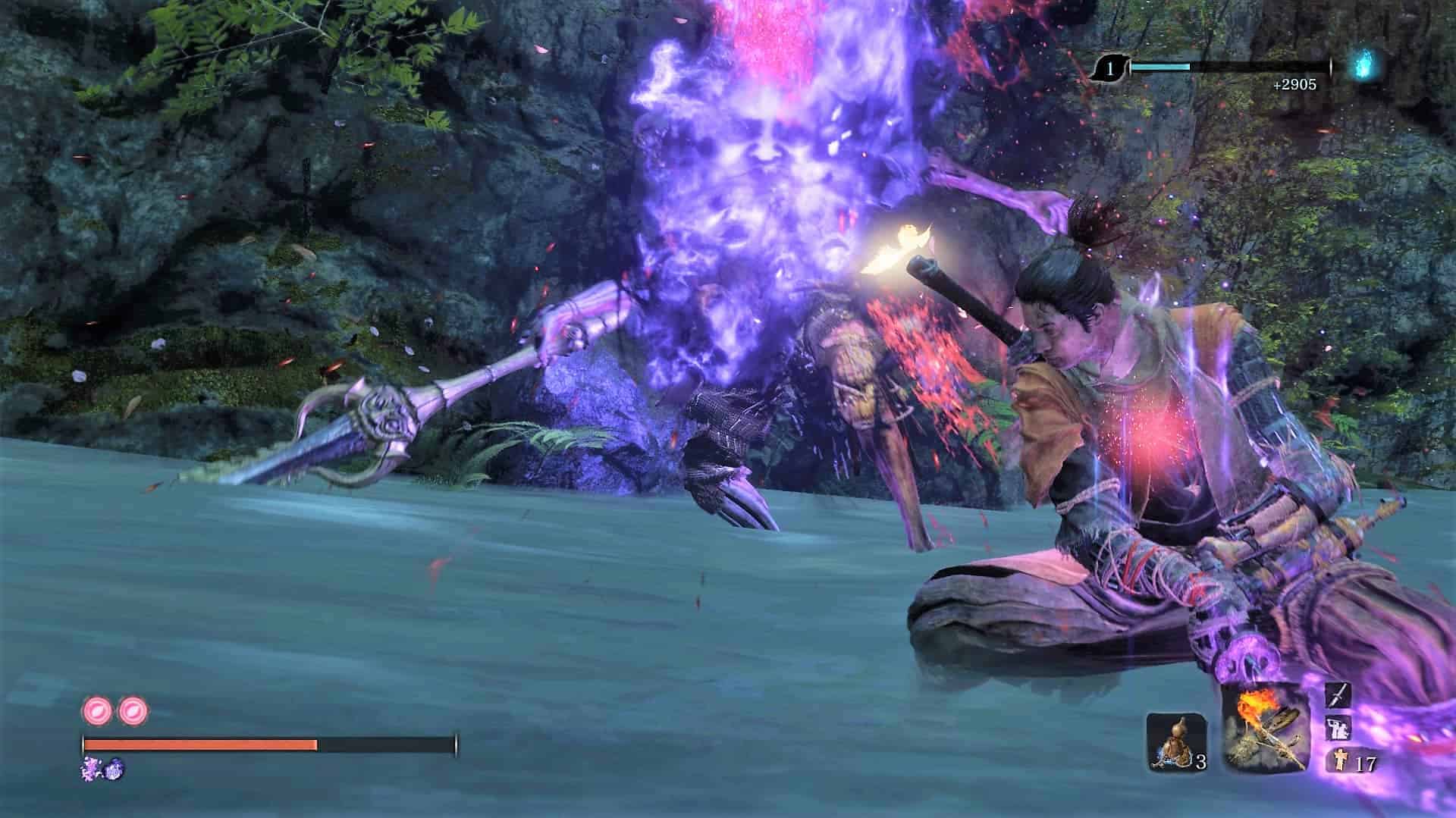 Taking inspiration from Japanese folklore. Sekiro features many types of enemies and some of them will give you a chill the first time you see one. The Shichimen Warrior (Warrior with seven faces) is one of them. You will first encounter these mysterious figures during your journey to Ashina Depth.

The Journey to Ashina Depth is one of the three path for Wolf to take to finally complete his duties. This path starts from Ashina Reservoir right at the place where Wolf has been hold captured at the beginning.

Before your first Sichimen Warrior, you will encounter the mysterious Lone Shadow and (optional) fight with one of the Seven Spears of Ashina.

As soon as you get past the Lone Shadow assassin. You will see this guy chilling in a pitch dark area down below the path. If you are just like me, your first instinct will probably… “oh hello, just passing by, I will come back later”

This guy looks like he can control the souls of the lost, and was just doing that when you encounter him. He basically doing nothing much when you start attacking him for the first time. But watch out! As there is a small build up bar as soon as you approach this boss.

This is probably your first interaction with Sekiro’s Apparition enemy type (similar to Ghost) These guys have a powerful resistance to normal physical attack. So don’t rush in with just your katana, you need something else.

Divine Confetti is your best item here. Before any fight with these mini-bosses, just pop this purple coffin-like box and imbue your sword with the energy field. You also look cooler in the process…

Starting off the fight, you can just go straight in and smack the Shichimen Warrior relentlessly. After the terror build up is above 50% Back out and uses Pacifying Agent to cure it. This will also give you a resistance to Terror status.

Finally, there is a Shinobi skill that make this fight a lot easier – The Anti-Air Deathblow Text! If you can bait the Warrior to fly up. Simply jump up and you can instantly take out that HP node…

He will occasionally counter you with his staff attacks, but you can deflect this (or simply block) and continue attacking. This will eventually stun him and disperse the aura – indicating by a blast around him. After this, you can get more hits and he will then teleport away.

He will then proceed with the Souls beam, as soon as he teleports away, just running (using Circle or B on Xbox) sideways to the side while close in the distance to him. After this repeat, the above and you are good to go.

Similar to the Ashina Elite or the Generals of Ashina, there are three Shichimen Warriors to be found throughout your journey. Below is the location that you can fight this enemy type.

This is the one we covered heavily in this post. You probably see him as soon as you dropped to Ashina Depth right after the Lone Shadow Longswordsman fight. This guy is chilling in the darkness with his Soul.

Defeating this guy will reward you with a Testimonial Knife – an item sacrifices your Vitality (HP) for 5 Spirit Emblem.

Almost every secret in Sekiro is hinted throughout items or “Information Text” If you are wondering what you may have missed. Check out the merchant merchandise!

After defeating the Headless Ape the second time with his minions. Teleport away and you can see that this area is locked out. Return to this place via the Ashina Dept Idol or the Hidden Forest Idol and you can find another Shichimen Warrior here. Defeating this guy will net you the following

Here is how I defeat him

This is pretty well hidden. At the Sakura Sculptor Idol (Near the place you find Okami Leader) Instead of continuing on the path to the mountain, drop down the ledge at the connection between buildings. You will see two “Wolfs” here. Defeat them and continue forward. You will shortly notice another Shichimen Warrior near the waterfall.

While the fight is essentially the same as the other two, the area may cause some trouble as there is no space to properly running and dodge his Souls Beam.

One of the options is to instantly move to the opposite side of the Waterfall when he teleported. There are only two places: The Waterfall and the opposite direction. This last Shichiment Warrior will drop this upon defeat:

Sekiro: Shadow Die Twice is one of the game I decided to get the Platinum Trophy after my hiatus for a while. The reason is simple, it is one hell of an action game! Blending the classic Tenchu style gameplay and the finest of nowadays RPG system (Looking at you Prosthetic Arms) From Software delivers one of the biggest contenders for GOTY here.

You will need to do this three times…

I decided to put all the things I have done into the guides in EthuGamer. There probably someone already covered these, but all of these will have some personal touch to it. If you love the game, let me know in the comment!