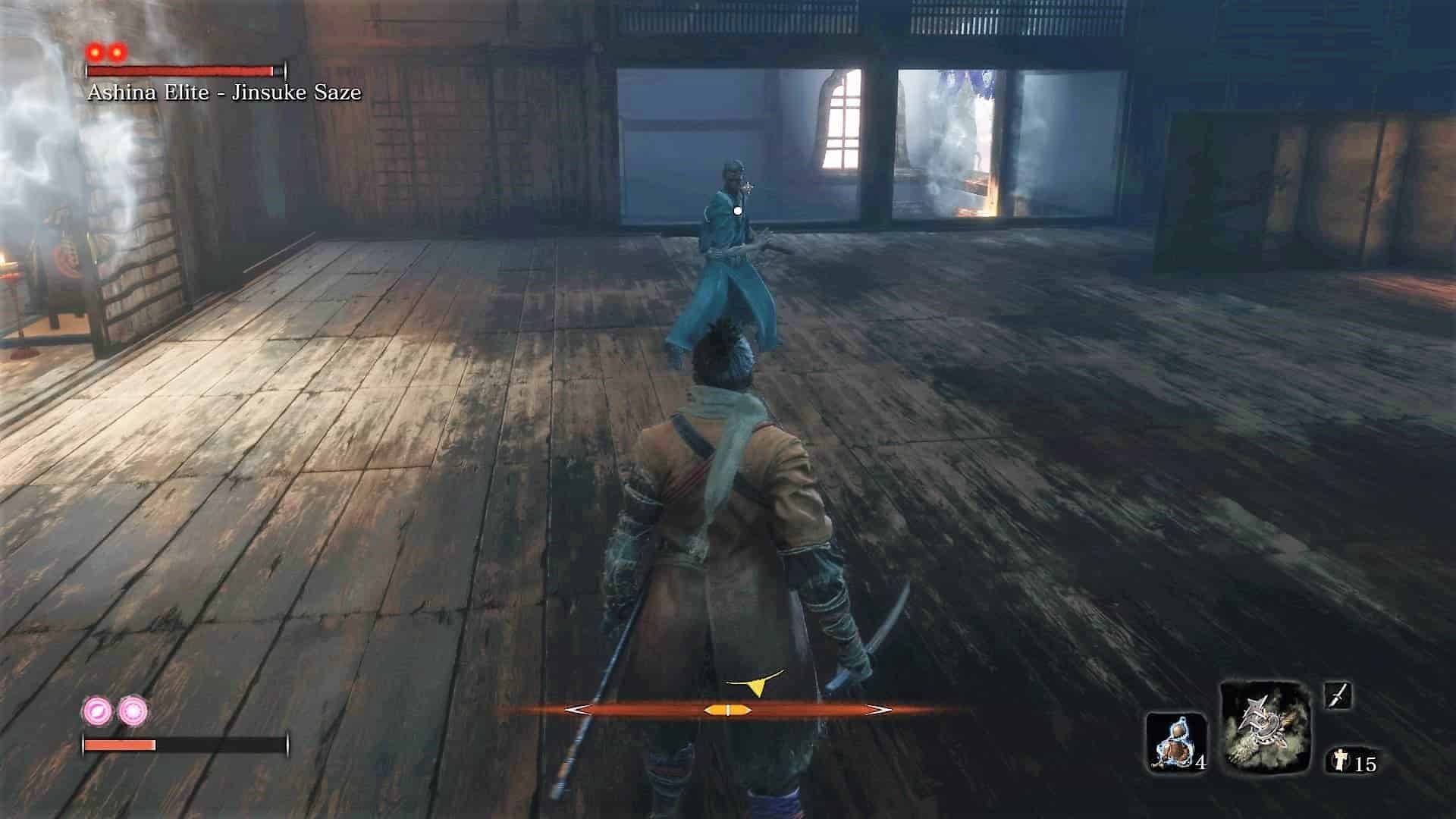 After ninja-jumping through countless rooftop to reach the castle top. You were first welcomed by the skinny samurais walking calmly through the castle. Your first thought  – “Oh, what can these skinny dudes do to me? I just beat the crap out of that raven-fire-spinning-chakra-ninja”

Apparently, From Software always know how to design the best enemy. These samurais are like the special forces of the clan, capable of the deadly sword style.

If you somehow obtain a “anonymous” sword style via an encounter before this fight. You will notice that these guys have the same moves!

This guy gives you a fighting Style Text

And at the near-top of the castle, you will be welcomed by the most honorable member of the clan – Ashina Elite – Jinsuke Saze.

Well, not much. The first attack is an Iai-style two-hit attack. But well, that flash attack will instantly kill you if you get hit. And trust me on this, the chances you die for the first time you meet this guy is around 95%

One thing if you haven’t notice in all this time, while these swordsman’s all have powerful and deadly sword skills. They bear the same physical appearance, thin and dry skin, almost like a man on their deathbed.

To me, this does not for nothing, It is definitely related to their fighting style. Look like almost all the life force from these guys have been put into the finesse of the Ashina Style.

But that also means that they may have low stamina or so I say “posture”. With that in mind, your option in this fight is to stand still and deflect his Iai-Draw attack. For my 1st playthrough, it just takes three times of deflect of this attack to break his posture and finish his HP.

On the second stage, he will (rarely) mixing it up with a Sweep Attack. This can be countered with a jump kick. If you are not familiar with this (yet) I suggest just try to close in aggressively and force him to perform his Iai-Attack. Again, you can just break his posture in around 3 successful deflections. This makes the total fight last around 9 seconds.

Just like the General Samurai or the Lone Shadow Ninja, There are multiple Ashina Elite for you to fight in Sekiro: Shadow Die Twice.

He stands atop at Ashina Dojo, calmly waiting for you when you first saw him. Below is how I defeated him in nine seconds. Defeating this samurai will net you a Prayer Bead and a glance at how to defeat Genichiro

You meet another guy with the same fighting style later on if you progress near the end of the Story. However, this can be missed if you are not so keen on the exploration part of Sekiro. He is located at the same place where you found the Sabimaru for the first time.

There is an area just below the Dojo, where you need to defeat two Ashina Samurai. After that, attack the door in front and a new route will be opened.

This is where to find this guy…

This guy will have a slower approach to the pace of his attacks, but in the end, he bears the same fighting styles just as our first encounter with Jinsuke Saze. Just remember to Deflect instead of step-doge away. Similar to other miniboss fights, this guy will give you a Prayer Bead upon defeat.

A full fight on how to defeat the Ashina Elite

Sekiro: Shadow Die Twice is one of the game I decided to get the Platinum Trophy after my hiatus for a while. The reason is simple, it is one hell of an action game! Blending the classic Tenchu style gameplay and the finest of nowadays RPG system (Looking at you Prosthetic Arms) From Software delivers one of the biggest contenders for GOTY here.

I decided to put all the things I have done into the guides in EthuGamer. There probably someone already covered these, but all of these will have some personal touch to it. If you love the game, let me know in the comment!