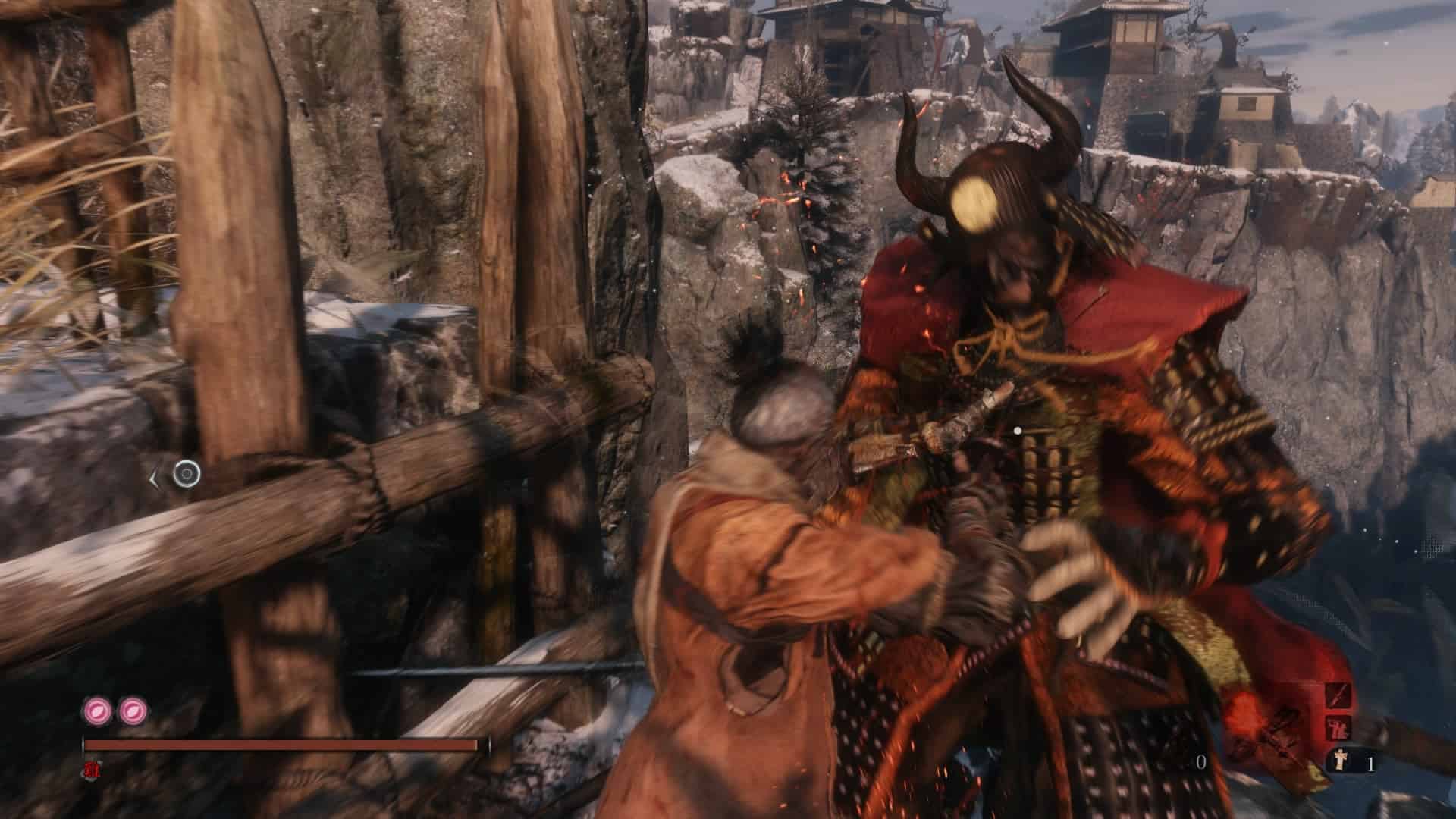 You see him in trailers, you encounter him firstly in your journey to the Sengoku Era with Sekiro. These powerful and fearless samurai warriors are the leaders and powerful officers of the Ashina clan.

But not just that, these guys are there to remind you time and time again “This is not Dark Souls…”

You will first encounter the General Samurai very early through your journey of Ashina Outskirt. Facing this guy for the first time, you will be introduced to the unblockable attacks of Sekiro: Shadows Die Twice. It turns out that your first mini-boss does have them all as well.

It is pretty obvious he is just a water testing target as he stand alone in an open-field. Calmly waiting for whoever venture this far…

Again, Kudo to From Software here for cleverly design this fight to be a quick experiment on what comes next in the whole game. You have two approaches as soon as you saw … for the first time. He will be waiting for you on the very right side of the area – next to the cliff. This intentionally leaving a wide empty area on his left side that let Wolf sneak in.

If you decide to just face him heads on, Just do it though.

With the Odachi, these Samurais are the perfect examples of a heavy hitter enemy. Their attacks have a wide range and can take a ton of your HP with one swing.

I suggest using this guy to learn not to dodge and instead stay your ground to deflect the attack of this guy. Below is the common practice of the first-time player to beat this boss:

Later on when you are familiar with the Deflect system of Sekiro. Don’t be afraid to go all out on these guys. His attacks are easy to guess and you can defeat him faster by Deflecting or Jump Kicking on his Sweep Attacks.

Your first Killing Blow will be satisfying…

You will meet the General on several occasions during your journey to rescue Kuro. All of them are technically the same enemy, with some minor variant in moveset.

Located early in Ashina Outskirt, this one will stand alone in an open field. You can follow the left path to jump on the roof just above him. This provides you with an easy death blow. After that proceed with the above strategy

Right after the Orge fight, you will encounter this guy. Unlike the first General, he is accompanied by many goons. This shows you to plan carefully before fighting him. You sneak in to follow the left path and silently defeat all enemies and land him

After passing the outskirt of Ashina Castle. You will see this guy stand on the top of the stairs with five Rifle Soldier. You can sneak past via the left wall and land a finishing blow on him. After that, you need to take care of the Soldier around him.

The Rifleman can be dealt with by using a Thrust (Holding R1/ RB) and Finish Blow. Make sure you block the projectile though.

This guy also prefers the Thrust attack a lot more than his peers. You can take this chance to practice Mikri Counter as well. It is very satisfying to land one and follows with a punishment.