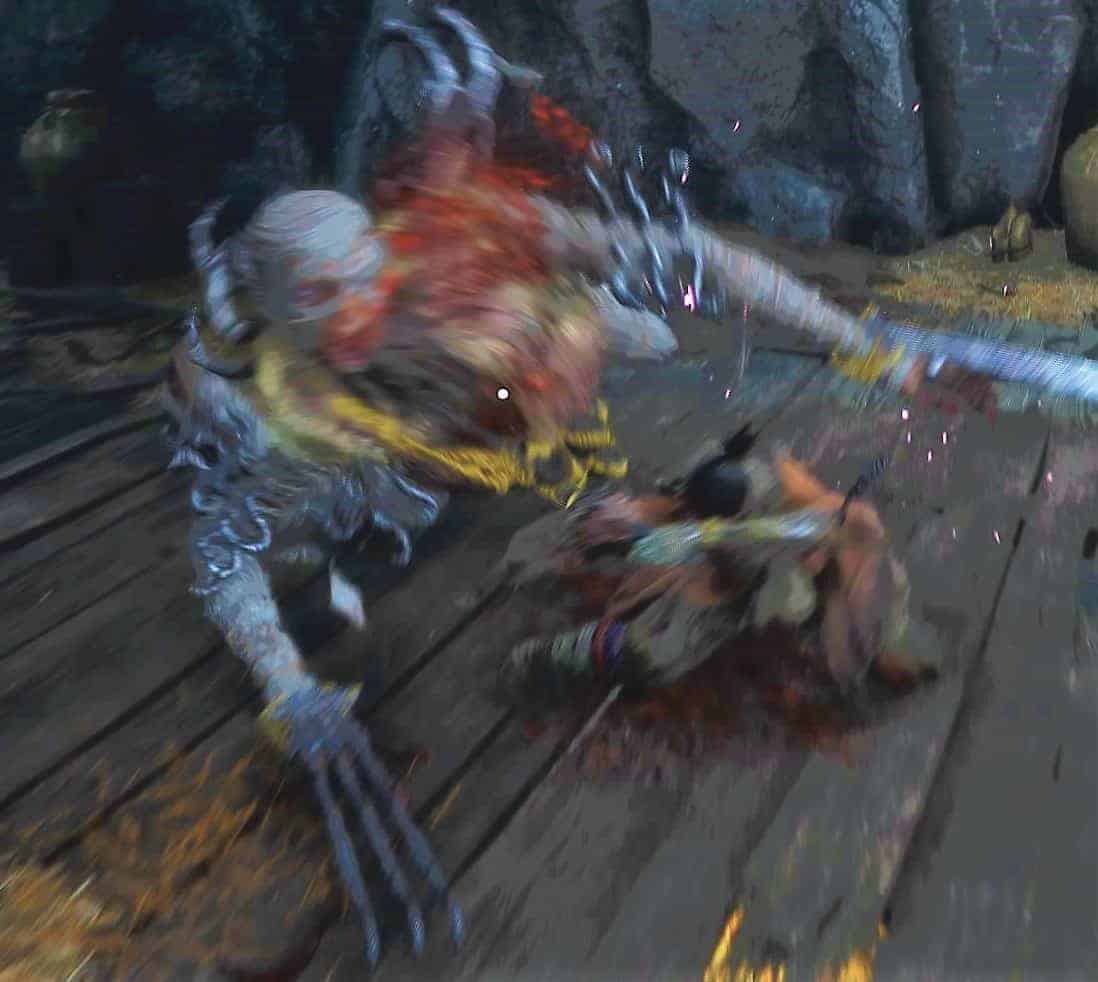 This will be a short write. As this mini-boss will probably take you around 30 seconds (Mine was 35 seconds counting the death blow animation) When things go right.

That is his full name. There is a very high chance that this is due to a mistranslation of the Japanese text…

You will meet this super-creepy-looking guy right after you crossed those annoying shotgun “ladies” at Sunken Valley. This is mid way through your journey on the questline of Sunken Valley.

HIs first attack is just clawing left and right. (There are 9 consecutive attacks follows by a dual claw attack at the end) If you parry all of his attacks, he will then follow up with a sweep attack.

And… That’s it, no more special moves.

While the mechanic of the fight is pretty easy. There are some surprises element when you first saw him. Given the little space of the room and the way he comes forward you, this creepy man still can let you return back to the Sculptor Idols once or twice if you are cornered and forgot what to do.

You are pretty safe with mashing L1 actually, while there some changes in his tempo, you can probably deflect 6 out of 9 attacks and dealing some posture damage. Watch out for your Posture though, if it is broke, you will taste those claw pretty quickly.

The second unblockable attack – The Sweep will require more focus though. It is always a sweep, so just remember to Jump, and Jump again on him to deal Posture Damage. Repeat this process until you depleted his Posture and finish with a Killing Blow.

On his second HP Bar, the only change is that he will occasionally perform the sweep mid-attack. Just as before, just jump up with X (A on Xbox One) and you can finish this creep in no time.

This is how a full fight going on.

After this guy, you will be rewarded with a special item as well.

Updated on 17 – April. I missed this boss on my first playthrough. It makes sense when you visit Senpou Temple to see another brother of the Long-Arm Centipede Girraffe…

Later in the game (or before, depending on your process), you will need to visit Senpou Temple. On this area, you will meet the tiny version of the Long-Arm enemies, but it looks like this is actually where they belong. So it is pretty self-explainable to have another Long-Arm miniboss here.

You can locate this guy right after the Armored Warrior fight at Senpou temple. By following the mountain path toward the smoke – where they are burning “something” Turn right at this point and follow the path until you visit a small building. Inside there is a big wall which Wolf can grapple to. In the main hall will be the Long-Arm Centipede Sen’Un – with some of its minions.

Defeat the minions by simply jump forward them and hit R1 (RB on Xbox) You need to keep the distance to the boss though, as he will try to close in very aggressively. Shuriken can also work here, given you have upgraded some of them.

Finally, this boss has the same moveset as it’s brother, so it should be no issue if you already defeated the Long-Arm Centipede Giraffe before.

I will cover the series of miniboss in my next few posts and try to complete my Sekiro Guides section at the end of this month. Thanks for reading!