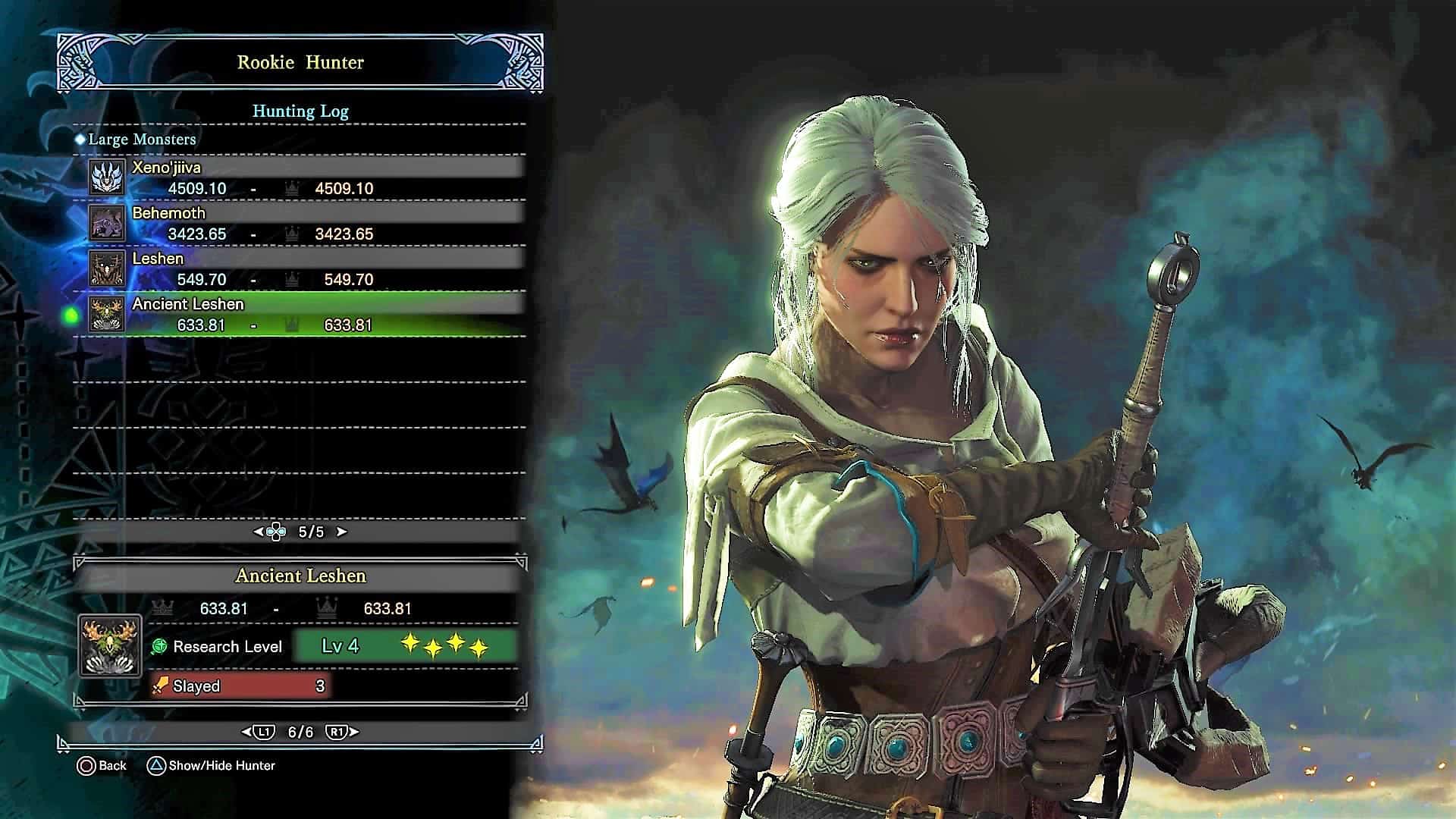 This was first posted way back in the Witcher Collaboration Event launched for the consoles. During this time, I got Ciri Weapon and was able to come up with a  Dual Blade Build here. For PC Players, if this is the first time you face MHW Ancient Leshen. Check out the key points below:

I wrote this right after I obtained enough materials for The Zireael as well as the Ciri’s armor set.  If you have just come back to Monster Hunter World and wondering why the white-hair witcher content are here. Check out my previous post on the Witcher Collaboration Event.

After the fascinating quest with Geralt of Rivia in the first announcement of the Witcher Collaboration Event, another familiar face from the famous series also makes an appearance. While you don’t have the chance to play as this guest, you will need to endure one of the hardest (and probably longest) fight to finally see her looks and weapons.

Both the previous quest “In the Heart of the wood” and the new one “Contract: Woodland Spirit” are real quest line from the Witcher III Wild hunt.

In this particular quest. You will face the “upgraded” version of the Leshen, this is more like a Tempered version of this new monster (Some even mention this as Arch Tempered due to the difficulty spike in this quest) While the Witcher’s last content (For a list of rewards, go here) are unlimited and you can continue the quest as many time as you want. This Ancient Leshen only appears from February 15 till March 01) This is still a long period for an event quest, considering our Appreciation Fest will go to an end next week.

In our last quest, we were introduced to Leshen – a creature that hides deep in the wood, with the power to control plants and animals in it’s territory. In this second event quest, while you don’t get the chance to experience the story under the eye of the Witcher anymore, you will need to face the most powerful version of a Leshen known to mankind – The Ancient Leshen.

The fight here will be comparable to those of Behemoth or any Arch-Tempered Elder Dragons! Make sure you prepare carefully before this quest. And Don’t go in alone! Your best bet on this one is a team, as most of the Ancient Leshen’s moveset is capable of one-shot you and two of them are super annoying.

Death March difficulty in Witcher III is the very hard option for the game. As if this helped you imagine what await you in this fight.

It’s more or less the same in Monster Hunter World

Oh, I almost forgot his “Ultimate” – typically cast at 3rd or 4th stage of the fight…

The above list should have covered all of the most powerful attacks of this fearsome monsters.

With this arsenal, this forest demon has already caused many hunters to almost throw their controller. And well, not so many peoples attempt to solo him as well. Except…

By now, several other players also attempt this and success! It is possible to solo this guy, but if you want to save time. Gather a team and go on a hunt instead

So you won’t go in alone in this fight, but you still cannot finish it. What are wrong? From my experience (After 8 – 9 hours getting carted and finally got three complete runs) Below is the most common mistakes during this fight.

While Ancient Leshen hit hard, and almost never stop in it’s attacks. You can still counter most of the attack as follow:

The build below is definitely not the best support build, but it’s pretty easy to pick up and you may already got all the jewels used in the build at HR 50

So we know Ancient Leshen hit hard, and your best option is to going in as a team. It will be all sunshine and rainbow if you have the dream team like those of Team Darkside, but what if you are going in alone? In hope of the random players across the internet? Well, we do have some hope though. If I can finish the hunt, so do you.

Your first goal of this fight is to “Save yourself”. Just as other hunts with a team, don’t get carted! As your failure will be counted towards the whole team, and the fight will be over after three deaths. To do this, your first focus should be getting alive on this fight, which in turn, lead us to the following armor skills:

Health Boost will straight up maximize your little HP bar, combine with Mega-Nutrient or a meal and you got yourself a nice full HP Bar. Recovery Boost is for your HP to recover more quickly. While it is not all powerful and all, it can save you on those chip damage of the Bird Swamp.

Next off will be healing on time, as you already go in as a team. Your next armor skill should be:

The armor skill that comes in in all the support build, this will help you spread the effect of recovery items to nearby allies. At level 5, this will help the entire team got a consistent boost. This is also applied for other buff items (Mega Demon Drug or Armor)

Actually, Friendship is pretty common in Ancient Leshen fight as of now. If two members managed to get Friendship level 5 and consistently focus on HP, your team can be assure of healing for this long fight.

The remaining Armor Skill should depend on your current weapon of choices, but below is also a great addition to an HP assurance build:

Divine Blessing will help a great deal with those powerful attacks from the Leshen. Although there is no guarantee chance of activation, at least you got more chances in this fight. As for Free Meal, as you will use a lot of items in this fight, running out of them is definitely a big issue, having this skill in your arsenal, your job as a healer can last longer.

Witcher as a healer

With all said and done, here is my build when I fight this annoying monster.

Geralt’s Armor set is used in this fight as it got maximum Health Boost and Recovery Speed Right off the bat.  Combine this with the Set Bonus Super Recovery, you got yourself a fit option for the Ancient Leshen. As I am not focusing on damage, I chose to maximize Friendship by Friendship Charm III and two Friendship Jewels.

Next off, Satiated Jewel 1 is slotted in for one point in Free Meal. Finally, as a support tradition, I will need to consume my items faster than the normal hunters, Gobbler Jewel 1 is used to have 2 points in Speed Eating.

As I still fear of getting carted, I added two Protection Jewel to have Divine Blessing Level 2, to “occasionally” reduce the damage from the Ancient Leshen’s Attacks.

This Build also enables Igni Intensity a bonus to power up the Igni Sign – which can use to stagger Ancient Leshen in the fight. Finally, for the weapon, as I manage to get my hand on an ok Kulve’s weapon during Appreciation Fest. This was picked as my weapon.

If you got a better SnS with Fire Element, use it instead!

This quick build allows me to do the following:

With the above setup, you can then join an SOS Flare for this particular event, while you definitely not the best DPS, you will become a dependable support for this fight. It’s to run around and check on other’s HP and pop that Mega-Potion or Astera Jerky when they need it

.If you have a team, spread this article so they are aware of the Ancient’s Leshen mechanic. In the end, this fight mostly revolving around the coordination between team members to saving you from those nasty traps and instant kill shot.

Finally, if you manage to get through the fight (Typically last around 35 minutes) you will get yourself the materials to craft the following: