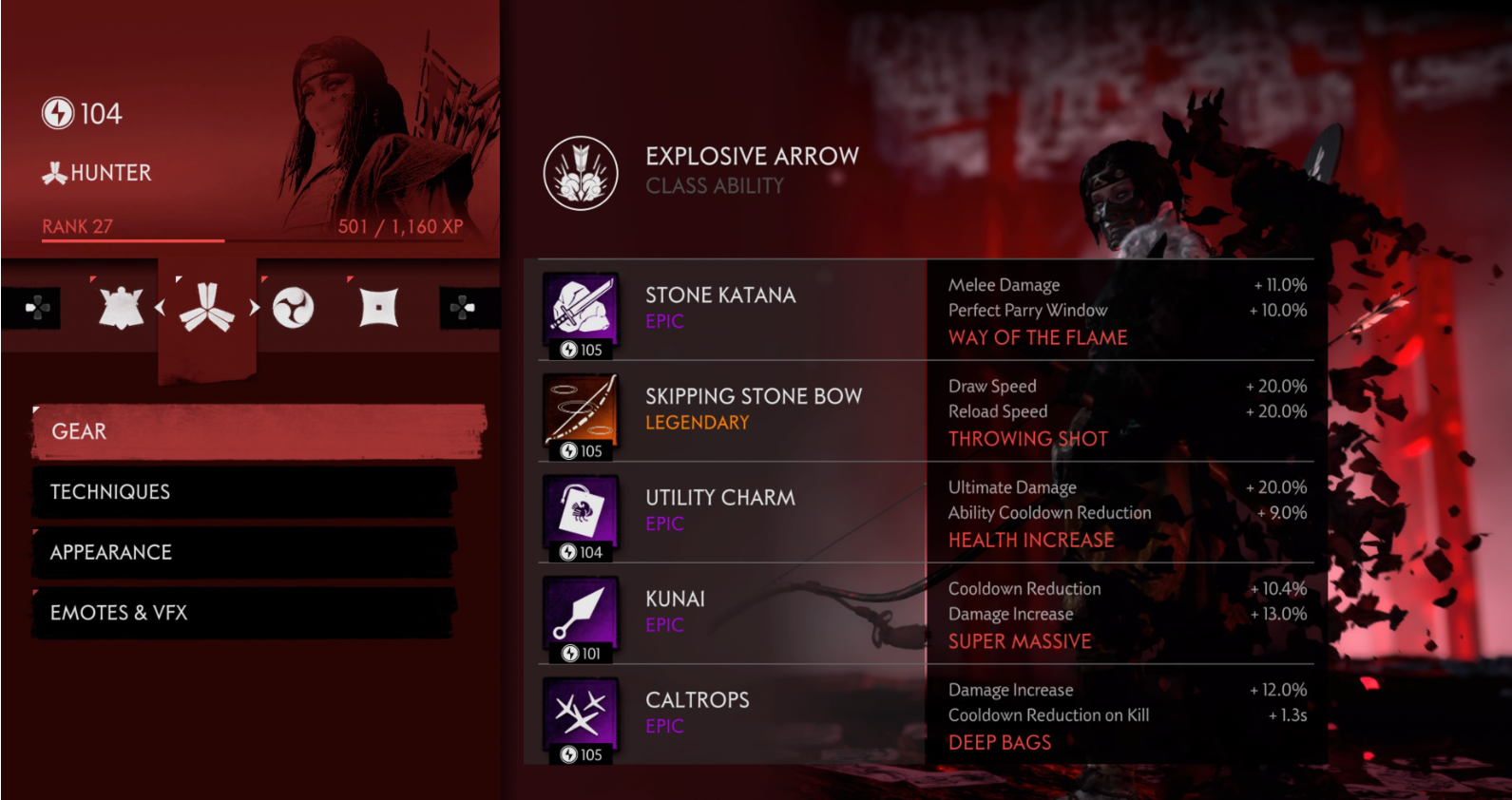 For Hunter, you got the ability to use the Long Bow (Other classes can only use Half Bow) Long Bow has higher damage compared to the usual Half Bow, and can instantly kill an enemy with a headshot.

All of Hunter’s skills are also related to the Bow. From Fire Arrow to the ability to shoot multiple shots in a row, you have the best tools for being the deadliest archer.

General Ranking for Hunter Class in Ghost of Tsushima Legend

Hunter is one of the best class if you want an easy journey on Ghost of Tsushima legends. Your main job is to headshot, dealing status damage with Fire Arrow, snipe out those annoying Shield Brute with Pierce arrow, and unleash your Ultimate when Oni/ Big enemies appear

What is better than a teammate that covers you from afar while you effortlessly dance between enemies? If you pick Hunter, try seizing those high rooftops and rope to cover your team from afar.

Hunter can still use all types of Katana, but is not as powerful as Samurai, just pick one you are comfortable with.

The only class to use Long Bow, your ultimate kill multiple enemies instantly, you also get access to other Bow perk skills

You can still use Ghost weapons like Smoke Bomb to quickly get an assassination/Critical Strike, but your kill is slower and the damage is lower compare to Assassin

Hunter can kill multiple small enemies or deal heavy damage to Onies with Arrow of Utchisune, making it the best class to clear out a group of enemies.

For Class Ability, you will start off with Staggering Arrow – which can briefly stun the enemies allow for more further attacks from your sword. At Rank 10, you will unlock Explosive Arrow, pick this and never look back – This is one of the best skill for Hunter in Ghost of Tsushima Legend

In Ghost of Tsushima Legends, you can pick between four classes (Samurai, Hunter, Assassin & Ronin) All classes have similar close combat playstyle at first glance, but each class has a focus on certain aspect (Stealth, Range, Support, and Close Combat)

The most optimal combination of Perk Techniques are as follow:

These three skills give you the perfect balance between utilities and damage. Reducing Class Ability lets you use Explosive Arrow more often. Fire Damage can wroc havoc to those Oni and big enemies. FInally, All-Seeing Eye helps your Ultimate clear out more enemies.

Best Gear for Hunters in Ghost of Tsushima Legends

For Silver and Bronze Story missions, pick whatever better gear you obtain. Around Ki Level 70 (With Gear Ki ranging from 70 – 85) you can try to reforge for some of the below properties

Try to farm for Skipping Stone Bow! This Legendary Bow has the Headshot ricochet unique option, allowing you to deal the same amount of damage to a nearby enemies (with Head Shot)

Depend on the Ghost Weapon you pick, the perk may varied, the easiest option for Hunter is Kunai, which is a superb addition for your Ranged combat. I find the Super Massive perk is the best perk to have on Kunai. This inflict heavy damage and can knock back enemies, let you finish them off with your sword.

Another good Ghost Weapon for Hunter is Caltrops, which deal stagger damage and slows the enemies, with the Deep Bag perk, this is the perfect traps to setup for unleashing havoc from afar.