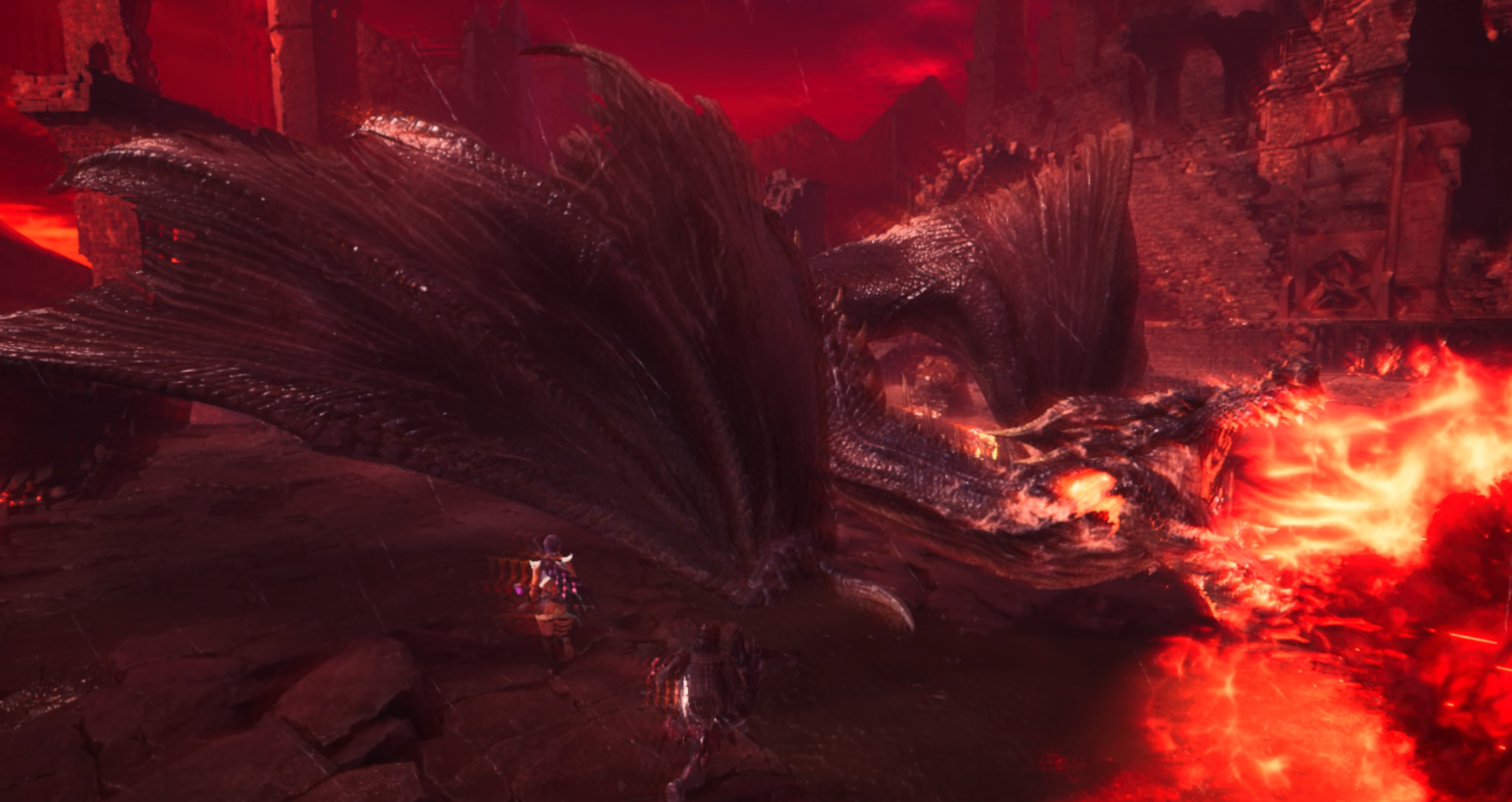 Alatreon’s HP in Dawn’s Triump is also lower and he can be stunned more easily with elemental damage. Treat this as a chance to farm up material for Alatreon’s Armor set, you will need it in Fatalis Fight.

After beating Alatreon and watch a lengthy cutscene with a special appearance of an old character, you can start the new Special Assignment The Black Dragon.

You will start the quest with Excitable A-List Hunter (Just give him a name!! Capcom) Who help you with distracting Fatalis and will Bind the monster with Binder Arrow when Fatalis is flinched.

This is also how Capcom shows us how to deal with the Black Dragon. During the fight, Fatalis will either stand on it’s rear leg or down to all four. While Fatalis’s weakness is it’s head, it’s pretty hard to target during the hunt, you can only resolve to attack it’s chest and rear leg.

To force him onto all four, you will need to deal enough damage to Fatalis’s chest.

The easiest way to getting past this phase is to load up the Cannons with Ghillie Mantle. After that, equip Temporal Mantle (With Heavy Artillery on the Mantle) to fire the cannons. There are countless

The Heavy Artillery will boost the Cannon Damage to 450 each shot, if you successfully hit all the shots you will deal ~5k Damage and knock down Fatalis in the process, leaving it’s head wide open for damage.

Make sure to tenderize Fatalis’s head when he is knocked down! This is to set up the wall slam when he gets up.

After getting past the cutscene, you are allowed to use SOS flare from now on with this Special Assignment. The fight will restart all over again without the help of the NPC, but follow the same route.

Without the distraction from the NPC Hunter, you will need to use Ghillie Mantle to get out of Fatalish sight. If you are playing online, make sure that Fatalis is already targeted other players.

This is the very first armor skill that you don’t think you need, but it helps a great tons with Fatalis fight. Heavy Artillery increase cannon damage from 225 to 450 (Double it’s damage) and can guarantee a knockdown if all shots are landed. This deal ~5000 damage to Fatalis’s 60,000 HP Bar.

The best way to shoot the cannons in the first phase is to equip the Ghillie Mantle while loading the cannons, and then equip Temporal Mantle + (With Heavy Artillery on it)

If you miss some of the shots, don’t be discouraged! The Ballista can still do some damage and can also knock down Fatalis! (This only happens if you have Heavy Artillery)

After Fatalis is knocked down, make sure to tenderize it’s head. As soon as it gets up, land a flinch shot to wall slam it into the cannon platform. This will destroy the Cannon, also ending all Phase #1 tools that you need to use.

The remaining of this phase is to deal with damage to Fatalis, survive the first Mega Flare, and get into Phase #2.

If you (or the team) deal enough damage to Fatalis, he will fly up and unleash a Fire Breath that starts with tick damage prior to a big blast that can instantly kill. Head to the area specified by the quest mark (This is the same place in the cutscene of this quest) and you will be safe to enter phase 2

Fatalis’s second phase opens up the area. You have access to two ballista with Binder Arrow, one Cannon near the gate, and one Roaming Ballista. Make sure to use each one correctly to deal the most damage to Fatalis.

In this phase, your focus should be breaking it’s head. This result in a knock down and give you more chance to survive on phase 3.

Fatalis’s moveset will remain the same, but he will fly more often when enraged. When flying, Fatalis doesn’t have any powerful attack, but this can shorten the time you can deal damage to him.

Both the binder can be used at any time during this phase, but make sure you utilize the time Fatalis is bound to the ground.

During Phase #3 All of Fatalis attack is enhanced (Indicating by the blue flame combine with the usual red flame) All of his usual attacks can instantly give you a cart.

The only way to weaken these attacks is to break the head of Fatalis, if you already broke this in Phase #2, the damage will be slightly lower (but still pretty high)

Around 3 minutes, the Roaming Ballista will be operational again, which give you a way to deal some damage to Fatalis, however he is more aggressive than Phase #2, make sure you got some openings to do this. The best way to use this is to equip Temporal Mantle with Heavy Artillery

Around 5 minutes to Phase #3, you will get access to the Dragonator, make sure to lure Fatalis toward the platform so both the Dragonator can hit him.

Fatalis is also susceptible to Sleep, which can double the Dragonator’s damage if you manage to inflict Sleep right before firing Dragonator.

After using all the heavy weapon around the arena, you still need to deal enough damage to slay the Black Dragon, most of Fatalis moveset are deadly, with some can instantly give you a cart. Despite it’s size, these attacks are pretty fast, and Fatalis perform a lot of different attacks without a pattern, most of your survivability lying in memorize these moves.

This is Fatalis’s most basic attacks, while locking on to a target, he will shoot three fireballs in a row, these are fast and deal a significant amount of damage. The last fireball is a charged one, which can cart if you don’t have enough defense and fire resistance

These quick Claw Sweeps deal around 25% of your HP (~1000 Def) While it is not deadly, it can trip you, open up for more deadly attacks

While standing in it’s rear legs, Fatalis will occasionally drop down on all four, dealing damage with it’s chest and pin you in the process, this can deal more than 50% of your HP, and immobilize your character – which can lead to a cart pretty easily

These are quick Fire Breath that leave a flame trails which will explode after a short delay, make sure to stay out of the flame trail

Fatalis charged for a brief delay (he will lower his head and fire spark will glow) and spit flame to the floor, this is similar to Kulve Taroth lava, which a shorter radius, but as you will mostly stay near Fatalis, this can cart you if you are in a middle of an attack.

The charge animation is similar to Lava Floor attack, but this blast is more deadly and faster to activate. The only way to dodge this is by staying near the tail.

This happens when there are hunters far away from Fatalis, he will breath fire across the map in 180 Degree. The damage is pretty

During Phase 3, all of Fatalis is deal more damage, and he is more aggressive as well. The only thing to do here is not to be greedy, as you can easily cart by any of Fatalis’s attack during phase 3.

His most dangerous attack is the 360 Fire Spin, which is pretty hard to dodge. While you can superman dive out of it, with it quick wind up, it can caught you off guard.

The best way to avoid this attack is to clutch claw into Fatalis.

We will dive into more detail on Anti Fatalis builds.

As of the moment, your best bet to face Fatalis is Dragon Weapons. This makes Alatreon’s weapon a good match up for Fatalis. Aside from the usual DPS focus skills (Criticale Eye/ Boosts, Attack Boosts, Weakness Exploit) you will need the following skills to survive, and effectively fight Fatalis

Other Quality of Life skills

The mother of meta…

Capcom basically pulls the ultimate on MHW meta, the best armor of the game? Fatalis. The highest damage weapon of MHW? Fatalis

The bonus from Fatalis armor opens up all kind of customization you can imagine of.

The 2 pieces bonus is Inheritance – which instantly unlocks the level cap of skill that has Secret (eg: Slugger Secret, Free meal Secret…)

Previously, only armor sets that come with certain secret skills can unlock the level cap. With 2 pieces of Fatalis Armor, you can now use that skill to it’s fullest potential.

For example, with two pieces of Fatalis Armor, if you equip Agitator jewel, it will automatically upgrade the level cap from 5 to level 7 unlocked (Previously need Agitator Secret from Brachydium armor)

The second bonus Transcendence let you start the fight without pumping up those Mega Nutrients or Dash Juice. It also get you True Razor Sharp (For Melee weapon) and Spare Shot (For Ranged Weapon)

For invidiual skills Fatalis armor provides a generous amount of both offensive and defensive skill.

Same to other armor, the beta variant of Fatalis provides more focus on decoration. This time, you got all three level 4 Slots for all pieces of the armor.