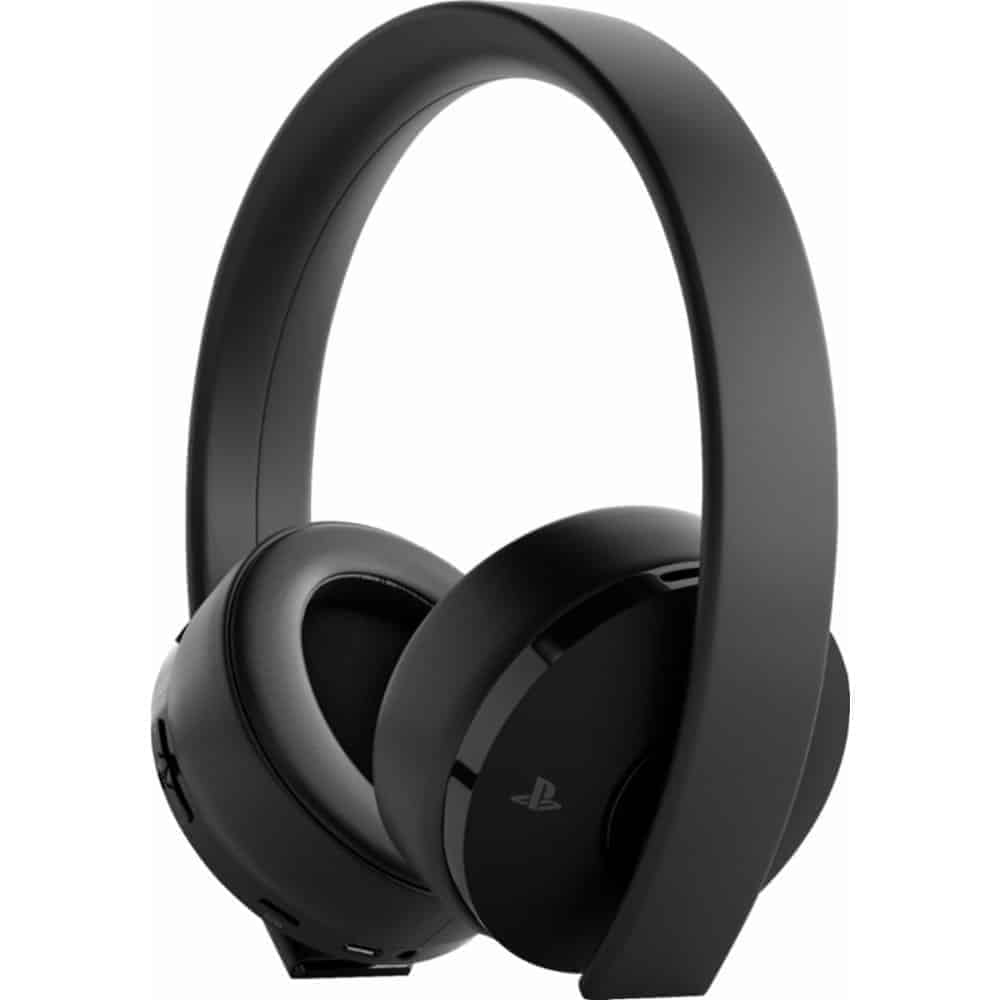 Recently, I received a gift for my PlayStation corner. The Sony PlayStation Wireless headset. I personally don’t use any gaming headset before, so this is the first time I got exposed to a product of this genre. And boi, this version of the headphones does give me a substantial boost to my gaming experience.

Here is the TL;DR version of this review:

PS4 Gold Wireless headset comes with your standard items for headphones, one USB cable for charging, an audio cable for quick use on your phone or when the battery is on its death bed. And the most important thing, a USB dongle to help maintain the connection between your PS4 and the headset.

My headset is the standard jet black color, with a gloss surface on the area surrounding the earcups. It looks quite pretty at first, but will surely be covered by your fingerprint after a long session. All of the buttons are located on the left side of the headset. Including the VSS (short for Virtual Surrounding Sound) The Volume adjustment buttons. I personally don’t keen on the way these buttons sound when press though, it was quite clicky, and the feeling is a little “hard” for my taste.

Speaking of the Left and Right side, as the PlayStation Gold Wireless headset is designed with the simplicity in mind, there are not much of difference between the front and the back, and sometime you may pick it up and see that the L & R are mixed up. (Check the button though!)

It may take some time to get used to the button scheme on this Gold Wireless headset, but every button is cleverly put in a reasonable distance.

The headband on this one is quite durable (There was a lot of complaints about the previous version of this one back in 2014, look like SONY has taken this advice and make an improvement on this new release) and will fit nicely to your head.  Both of the earcups can be slide up and down to suit for different head types. However, due to the side of my ear, I need to re-adjust this phone once in a while as the earcups don’t cover all of it and did cause some slight pain after 1 or 2 hours of playing.

Setting up the Gold Wireless Headset on the PS4 is super easy. You simply plug the USB Dongle to your PlayStation 4, switch the mode button to either 1 or 2 (More bass) and bam, the PlayStation will pop up a message saying all good to go.

Design by SONY itself, it is pretty self-explainable to see the PlayStation support this one natively. You can check for the current battery life and mute status. One of the thing that could be improved is the volume indication, I found it’s hard to guess if I am too loud, at maximum or just downright mute with the icon on the screen.

If you want to have more customizations to this Gold Headset, then SONY offers another tool for tuning and changing the preset of the PlayStation Gold Headset. Download the app by visiting the app store,

Headset Companion will require you to pick your current models of the supported headset. This is the current list of supported one.

The new version of the Gold Wireless headset is named “NEW Gold” to avoid confusion with the last version in 2014. You can also see the difference in the headband of the old one (Blue color)

I picked “NEW Gold” and proceed with the next screen. It is pretty straight forward on this section. You can pick the preset from games like God of War, Tomb Raider… These profiles are customized by the studio themselves, which definitely enhance the experience tailored to each title.

Most of the heavy hitters on PlayStation 4 will have a customization profile for you to pick (Metal Gear Survive is not counted!) The biggest surprise here is Marvel Spider Spider-Man is not listed here.

For a more general approach, the app also offers other common profile like a shooter, fighting for specific genres.

Finally, you can go to the customizations menu and create a profile yourself. Keeping in mind the general audience, the tuning options here are your three most common features of a headphone. Bass Treble and Mid

Well, yes and no. You can, of course, use the wire come with the package to connect to any smartphone, but all of the feature (VSS, mode switch, volume adjustment) will be completely non-function. Meaning you had yourself a sub-standard headphone to watch some random cat videos before bed. This is my biggest turn off for this headset.

But… but.. it is called “PlayStation Gold Wireless headset” mate! Yeah yeah, but do you watch random videos with your phone before bed? Do you?

As per the description, once paired with the PlayStation 4, the 7.1 Virtual Surround will be enabled natively and you can either switch from the standard mode (1) or Bass boost mode (2) I turned on the Headset straight up to 2 and never look back. The VSS feature does sound a little novelty for my amateur’s ear at the moment, but it does have some changes in the sound effect.

The first game I tested is Monster Hunter: World – yeah, a title I covered heavily on this site. As it is my most played game now, let’s see if the quality of the sound change how the monster roar.

The answer to this is a big YES. I used to think the sound is not as critical as the graphics when it comes to video games, turn out I was dead wrong. Visiting the Monster Hunter: World with this Gold Wireless headset is definitely a blast. Each environment sound is separate and I can clearly hear the ambient sound and feel the weight of each attack.

Fighting the monster this time also gives me another surprise. I can now experience that annoying Monster’s roar in all of its glory.

The second game I tested is Anthem – The currently most controversial Looter-Shooter from Bioware. Being a high tech -inspire video game, the music and sound effect of this title is completely on the opposite side of Monster Hunter: World. But The Gold Headset still manage to shine.

This is thank to the bass provided and crisp sound effect. The sound that you hear whenever a COMBO happen in Anthem now sound more satisfying and the gunplay is completely upgraded to one notch. I did not notice much difference from the standard to the Shooter Profile that I try to put in, but overall, still a nice experience for long grind session for that rare items.

With the upcoming release of MK II, this would be a good chance to practice for that Fatality and test out our new Gold Headset with a fighting game.

With a fighting game, the most satisfying sound will be that little “thump” when your hit connect. Thanks to the bass support of the Gold Headset, these sounds are made clearer as ever.

But can I talk?

Unlike other popular headsets, to simplify the design, the mic is not shown on the Gold Headset, but still usable. I don’t use this feature a lot (yeah, I have no friend) but it seems to work just fine, with nothing to complain about. An interesting feature of the PS Gold Wireless headset is the “sidestones” mode of the mic. This can be triggered by holding down the Mute button and you will hear your own voice while speaking.

It sounds weird at first, but still a unique feature to make sure you are not sound too loud.

While it’s definitely not fair to compare this to some higher-end option like the Sony Platinum Headset. With just around 90$ at the moment, this complete it’s purpose nicely. If you looking to upgrade from that random earbud or headphones, the Sony PlayStation Gold Wireless headset is definitely a good pick for your next PS4 accessories.

The biggest feature of this headset to me is the sound separation, where it gives you a more immersive experience to your games. For FPS or shooter games, this means hearing your enemies footstep and identify their position more easily (Thanks to the 7.1 support)

For other single player focus games (Yeah they are not dead, and will live forever) This headset can deliver a more realistic sound and music to your need. What about fighting games? Well, it’s just more satisfying to hear that “Thump” sound with more bass (but just enough) when you perform that triple punches combo.

This post contain affiliate link – meaning if you click and buy a product from these link. I will earn a small comission for it.