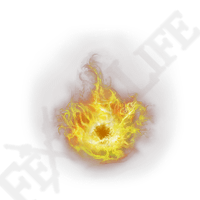 The Frenzied Flame Seal weapon can be found at the following location: Received at the end of Hyetta’s questline. Please see below for the tutorial on how to get frenzy seal in Elden ring.

How to get Frenzy Seal Elden Ring

You will need to follow the “Bad Ending” to get this Seal!

First, you will need to find Hyetta. Lightseeker Hyetta is a blind woman who follows the distant light. She seeks to become a Finger Maiden.

At the beginning of Elden Ring, You will need to find Irina, and receive Irina’s Letter in Weeping Penisula. After that, you can find Hyetta near the Lake-Facing Cliffs site of grace in Liurnia of the Lakes.

Talk to Hyetta to proceed with the quest. You can then find her here on the western side of the Purified Ruins, in Liurnia of the Lakes. Next, she will move to the north of the Gate Town Bridge site of grace in Liurnia.

She will then appear at Bellum Church, Northeastern Liurnia of the Lakes.

Finally, you can find him at Frenzied Flame Proscription below Leyndell, Royal Capital (Also the same place where you proceed to the “Bad Ending” in Elden Ring) After accepting the Three Fingers’s flame, return to Hyetta, talk to her and then you can pick up the Frenzied Flame Seal and five Frenzyflame Stones.

Frenzied Flame Seal has no Skill

This weapon cannot be upgraded with Ashes of War

Causes Madness Buildup: (55)Only applies to physical attacks made with the seal. Does not have an effect on Frenzied Flame incantations.

Frenzied Flame Incantations include Frenzied Burst, Howl of Shabriri, The Flame of Frenzy, and Unendurable Frenzy. Inescapable Frenzyis not currently buffed by this seal due to the spell’s unusual damage calculation

Frenzied Flame seal scale with Strenght, Dexterity, Intelligence, and Faith, making it a very good choice for any builds that combine with melee skills.

Frenzied Flame Seal has no Faith requirement, a pure Elden Ring Int build with less than 10 Faith can utilize this seal to use incantations with only Intelligence requirements, such as Law of Causality and Law of Regression.