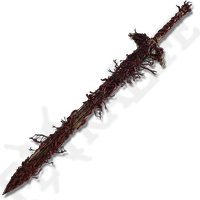 The Blasphemous Blade weapon can be found at the following location: Trade Remembrance of the Blasphemous with Eniaat Roundtable Hold.

Blasphemous Blade can be upgraded by using Somber Smithing Stones

Heals 4% of max HP + 40 flat HP on every enemy death when held, whether or not this sword killed them.

This effect does not stack with power stance.

Pairs well with Sword of Milos for a defense debuff on enemies added Bleed damage, and FP recovery on slain foes.

Blasphemous blade vs Rivers of blood

River of Blood – A Katana that often used in Elden Ring bleed build. While Blasphemous blade adds some heal on hit, it does not really scale with a Blood Build-up Build.