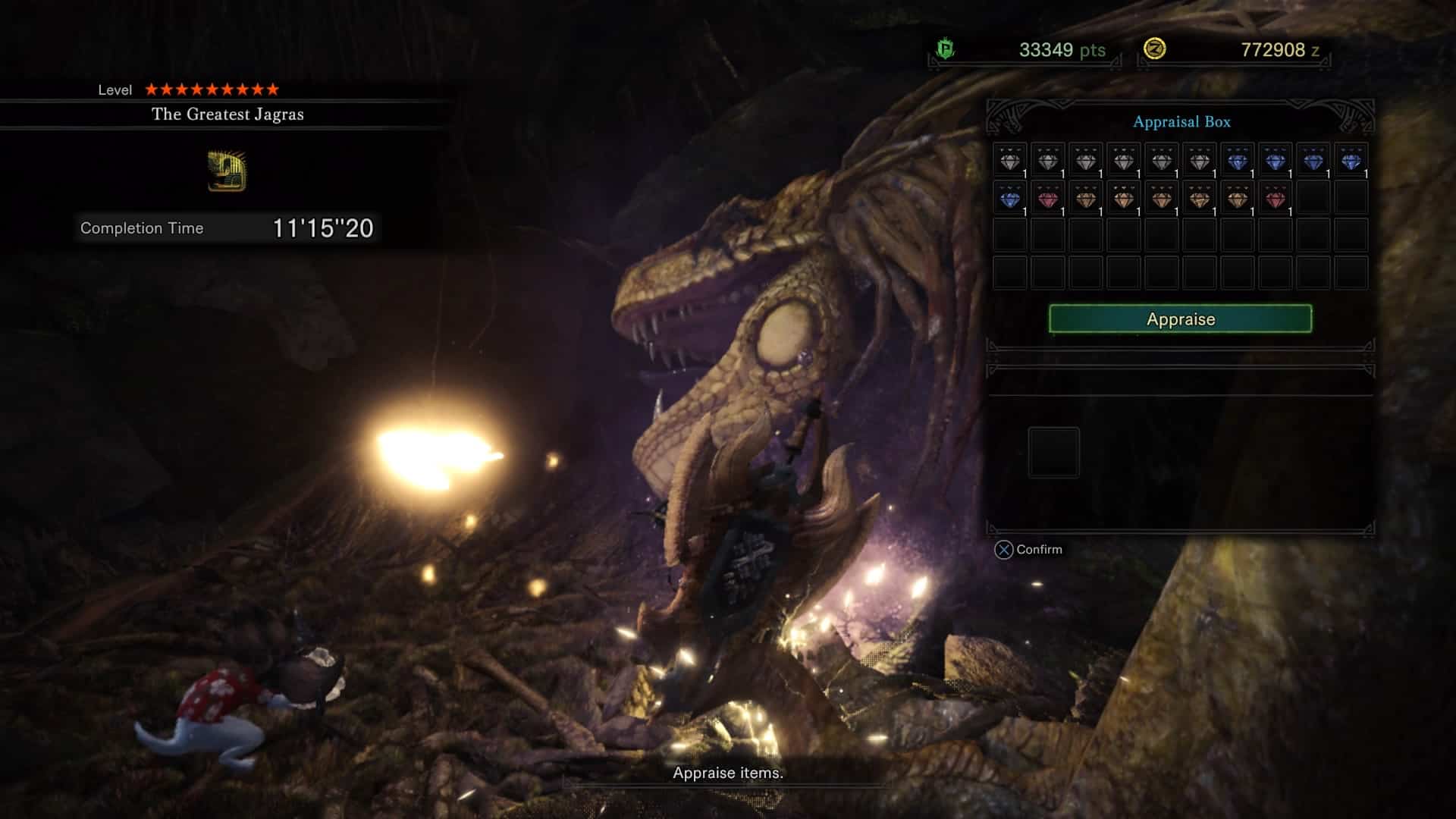 We all know him, the classic Lizard that was designed for the new hunters. He weak to all elemental attacks can be put to sleep or paralyze in just three hits. He loves swallowing stuff and then vomits that out after being beaten by those cold-blood hunters (including you and me, yeah) He is Jagras – The most hunted monster in Monster Hunter World.

Capcom always surprise us when it comes to new Event Quest. From that tiny Azure Rathalos combine with the biggest Dodogama for the Starlord Set, to the classic hunting three size variation of Odogaron in a row. This time, along with the Appreciation Fest, they put out an update to Jagras or should I say – The Greatest Jagras?

Follow the same format of previous encounters. Increase the size of the monster is nothing new in Monster Hunter World. While almost all of us already got the Gold Crown in the last Jagras involve quest – USJ: Gold Star Treatment. In this event quest, Capcom manages to break the world record one more time.

Don’t underestimate this quest though, our Jagras come back is just for revenge – To put the hunters to the carts for all those abusive hunts on his poor species.

For Console players, you can just jump in right now and access the Event menu. This event quest will last till February 7, 2019, which still give us some time to hunts this big bad lizard. The initial requirements are pretty straight forward

If this is the first time you jump on this quest. Remember to bring together a Pitfall Trap and Shock Trap (Thank me later) The sole purpose of this is to immobilize the monster to give you the time needed for hitting it – which is the crucial part of this hunt.

While the most visible update to the Jagras in this quest is its humongous size. The Greatest Jagras also comes with some tremendous update in power. If you are not careful, being cart back to your camp is definitely possible.

However, the reward this time is pretty unique. During the hunt, if you manage to cause enough damage when Jagras is in it’s “full state” (After his feast on those poor small beasts ) Feystones will be dropped in quick succession. These Feystones will be appraised at the end and give you those shiny jewels you have been long looking for.

Typical runs will yield more than 10 decorations – Mostly low levels of course, but with some setup, you can get around 4 Warp Feystones in each run.

If you only just passed HR 50, this event quest will surely give you some nail-bitting experience. Almost all of the moveset of the Jagras has been updated. Below are some of his common attacks in this greatest form.

With that out of the way, let see how you can farm the most out of this event.

As mentioned above, during this quest, you will get the chance to pick up Feystones directly after causing enough damage to the Greatest Jagras.

That is not any material. It is Feystones!

The first thing to do when starting the hunt is to let this big hungry boy has its food. After finishing the meal, Greatest Jagras will enter the full state (Indicating by that round big belly) You can then unleash your hardest combos on it.

With that said, while big and heavy, this Jagras is pretty quick and there are chances that your hit may not meet the target. Also, those attacks are more powerful than you think, know when to attack and withdraw is your key to success.

So that’s why we need those Shock Traps and Pitfall Traps in the beginning. These are best used when it’s already full, you can just set it down and start attacking as soon as its struck.

Not sure what trap are for? Check out this post!

If you manage to not get hit from those deadly attacks, soon you will see those drops (similar to monster part drops) indicating by white shiny pieces on the ground. Depend on your luck, these items will be picked up as Worn/Mysterious Feystones, the best being Warped Feystones (Red one) These will normally net you a level 3 Jewels upon appraised.

Remember to pick these up! This will vanish after some time.

The Greatest Jagras also follow the same routines as the normal Great Jagras. Typically you will encounter this beast in the first area of the Great Jungle, then it will move to the beach. In both areas, there is always a group of small monsters for the Jagras to have a feast. Either way, your main purpose in this hunt is to deal big damage while its full.

While some weapons are naturally come with high base damage. For the best result, bring with you some extra tools like Mega Barrel Bombs and Demon Drugs so you can inject some steroid before the fight.

There is already some runs that get the Jagras to be in Capturing state (Crippling & Groaning) in just after the first fight. These runs also last around 4 minutes.

Some even managed to get the full slots rewards!

Finally, try to capture this monster instead of going on with the flow and finish it off. The reason is capturing tend to yield you additional Warped Feystones. With a good run, you can normally get around 4 Warped Feystones in one run – which is already a really good rate compared to the difficulty of this Event Quest.

The Feystones that dropped during the hunt will vanish after sometime! Remember to pick it up while you have time.

Using my latest Light Bowgun Build to finish him off!

Are you currently hunting the biggest Jagras in history? What is your experience so far?

Let us know if this guide helps you out with this quest. If you are not sure what should be the best build for the weapon you are using, refer to our guides below: